With revenues growing and plenty of cash to play with, the odds look good for a dividend hike in "'016."

U.S. defense spending is under pressure. And in a tight spending environment at the Pentagon, investors might worry that defense companies such as General Dynamics (GD 0.81%) -- which already pays a tidy 2.1% dividend yield -- will keep their wallets in their pockets this year, and not raise dividends in 2016.

To which I say: Don't worry. The annual dividend hike, that investors have come to expect from General Dynamics, is safe. I admit, a cursory look at U.S. defense spending in the early innings of the 21st century seems to give some cause for worry. After more than doubling in value through the first decade of Century XXI, American military spending began to slide about five years ago. Based on Pentagon projections, it probably won't return to the 2010 peak anytime soon.

Also true, this decline in overall military spending hasn't been great news for General Dynamics. From 2010 through the end of 2014, this company saw its revenues decline by about 5%. But lately, things have begun turning around for General Dynamics. According to data from S&P Capital IQ, the first three quarters of 2015 saw a 5% increase in revenues at the defense giant. And while the final results for the year aren't yet in, analysts predict the company will hold on to most of its revenue gains by year-end -- then proceed to continue growing revenues every year through at least 2019.

Woulda, coulda... will?
This bodes really well for further hikes to General Dynamics' dividend payouts, which after all, at last report, only consumed about 37% of available operating profits. Within the defense industry, this puts General Dynamics somewhere in the middle of the pack, between rival Textron (TXT -0.69%) for example -- a laggard with a dividend payout ratio of only 3% -- and market leader Lockheed Martin (LMT 1.11%), which pays out a generous 53% of its net income as dividends each year.

Perhaps more importantly, because its revenues are growing, General Dynamics bears a closer resemblance to Lockheed Martin, whose revenues rose 3% last quarter, than to Textron, where revenues sank 7%. This, too, is an argument for General Dynamics sticking to its policy of raising dividends every year.

Old habits are hard to break
Oh, did I not mention that? Yes, it's true. The real clue to what the future holds for General Dynamics and its dividend can be found in the company's own past practice. As you can see in the chart below, General Dynamics has a strong history of raising its dividend like clockwork -- much like Lockheed Martin does, and much unlike Textron: 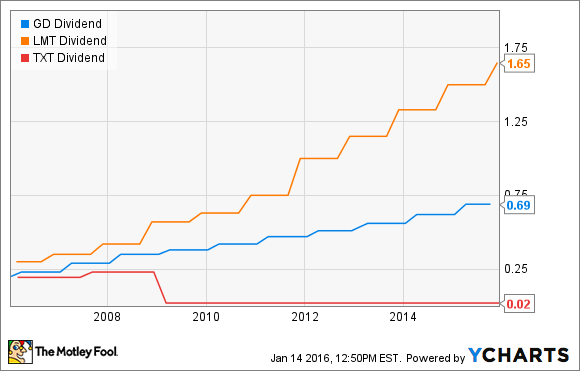 In fact, the last time General Dynamics raised its dividend (March 2015) the company made a point of reminding investors that was "the 18th consecutive annual dividend increase authorized by the General Dynamics board." With a record like that, plenty of money is available to fund further increases, and a growing business (despite the downturn elsewhere in defense), I'd say it's a virtual certainty that come March 2016, General Dynamics will announce its 19th consecutive dividend hike, as well.

Fool contributor Rich Smith does not own shares of, nor is he short, any company named above. You can find him on Motley Fool CAPS, publicly pontificating under the handle TMFDitty, where he's currently ranked No. 255 out of more than 75,000 rated members.