And don't bother knocking Raytheon -- because these earnings are still rocking. 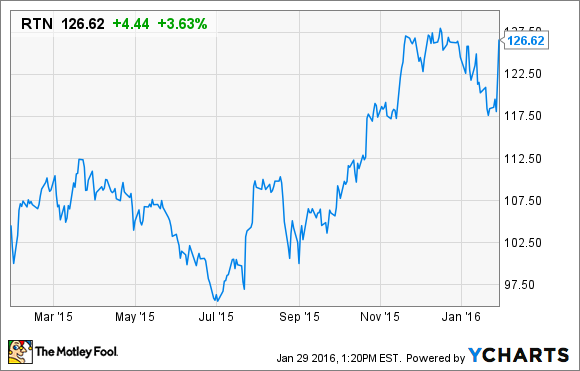 Raytheon shares are on a tear -- again. RTN data by YCharts.

Raytheon (RTN) shares spiked after the company reported a bumper crop of earnings Thursday -- and they haven't looked back since. After jumping 3.5% Thursday, Raytheon shares continued to climb through close of trading Friday -- up another 4.9% on the day.

So clearly, Raytheon's news was good. But precisely how good was it?

The week that was
Here's how the quarter went down:

That's a nice start. But those were just the quarterly results. Since we only get a chance to view Raytheon's performance for an entire year-at-a-glance once a year, let's not miss that chance. Here's how Raytheon performed over the course of 2015 as a whole:

The weeks (months, and quarters) to come
And Raytheon's cash profits could keep on growing. Raytheon noted that its backlog of work to be done increased by a modest 3%, growing to $34.7 billion. Of that, 72% is funded backlog -- for which Congress has already appropriated funds. That's roughly enough backlog to keep Raytheon at work for one full year, even if it wins no new contracts.

Even better, Raytheon is showing strong momentum on new order bookings -- the input that causes a company's backlog to grow. New bookings for 2015 amounted to $25.2 billion, nearly 9% more than the $23.2 billion in revenues (the output from backlog) that Raytheon brought in. And things picked up speed as the year progressed. Q4 bookings shot up to $7.9 billion, versus sales of just $6.3 billion. That gave Raytheon a book-to-bill ratio of 1.24 for the final quarter of the year, versus 1.09 for the year as a whole.

Either way, though, the story here is clear: Raytheon's bringing in new orders faster than it's turning those orders into delivered products and collected revenues. The company's business is growing -- and profits and free cash flow will grow with it.

Not long ago, Fool contributor Rich Smith gave serious thought to selling his Raytheon shares -- but never quite got around to it. Now, he's kind of happy about that. You can find him on Motley Fool CAPS, publicly pontificating under the handle TMFDitty, where he's currently ranked No. 249 out of more than 75,000 rated members.