After a series of tumultuous earnings reports, AgroFresh Solutions Inc. (NASDAQ:AGFS) finally delivered results that didn't make stockholders check their blood pressure. With the ship now steadied and food industry veteran Jordi Ferre as the new CEO, AgroFresh investors will be hoping the company can get back to growth. Let's take a look at the second-quarter results. 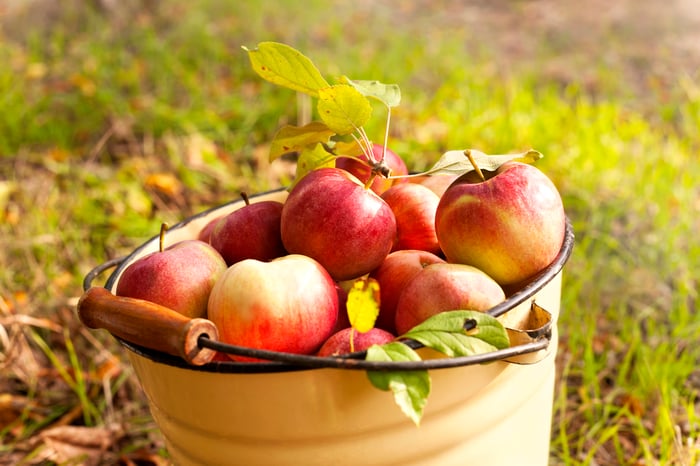 Here are the headline numbers:

As one can see, the results were in line with guidance. However, the second quarter is only expected to produce around 10% of full-year sales -- it's the least significant quarter of the year.

In fact, AgroFresh usually generates 70%-75% of its sales in the second half because the Northern Hemisphere apple crop is more important to the company than the Southern Hemisphere's. More on that later.

As alluded to above, the second half (Northern Hemisphere crop, particularly apples) is the key to AgroFresh's full year. Nevertheless, the company executed as expected in the second quarter and maintained guidance. Investors can ask for little more than that.

Looking back at the first quarter, AgroFresh's sales were lower than expected due to delayed harvests in important Southern Hemisphere end markets like Chile and New Zealand. At the time, management spoke of sales being pushed into the second quarter. Of course, such situations usually create uncertainty among investors but the good news is they came through as predicted.

While current sales will always be the key focus, AgroFresh is also making plans to increase future sales. At the moment, it relies heavily on SmartFresh -- a product that keeps fruit fresh, primarily apples, longer during transportation and storage -- but the company intends to introduce new products and develop sales of existing products like Harvista (helps farmers expand harvest window and reduce fruit drop) and AdvanStore (monitors decaying fruit). As such, it accelerated the launch of its new product offerings and made progress on its external development strategy.

Regarding new products, management outlined that Landspring (reduces stress on seedlings during transportation) is expected to generate initial sales in the third quarter. Meanwhile, AgroFresh's recent global agreement to distribute BotanoCap's primary solution (improves storage stability and shelf life in soft fruits and flowers) is expected to start generating sales in a year or two.

There are two things to focus on here.

1. Management's projection for the all-important Northern Hemisphere apple crop. Frankly, predicting apple production figures is fraught with uncertainty due to the variability of weather patterns, so these things can't be set in stone. That said, AgroFresh's best estimate is for an 11% apple production increase in the U.S., with total European production forecast to fall 3%. On balance, it's a positive forecast and compares favorably with the weaker (U.S.) production figures reported in 2015.

2. Management's commitment to developing new products. Chairman Nance Dicciani summed up the earnings call by saying, "We've accelerated the launch of our new products, taken steps to defend and grow our position against competition and made progress on our external development strategy."

Investors should keep an eye out for weather conditions and apple production forecasts for the Northern Hemisphere -- until new products develop meaningful sales, it remains the primary driver of profitability for AgroFresh. Meanwhile, the company continues to try to reduce its cost base as a public company while also accelerating investment in new products and developing sales of its existing products.