The second half of the year is the key to produce freshness solutions company AgroFresh Solutions, Inc.'s (NASDAQ:AGFS) full-year earnings, so its fourth-quarter earnings are always keenly watched. The good news: The recent fourth quarter saw the company executing well in the face of some difficult headwinds -- not least of which was a double-digit year-over-year drop in the European apple crop.

Apples continue to be the company's most important crop, but management is trying to diversify its end markets. Let's take a look at the earnings report and what management said about its diversification and growth strategy. 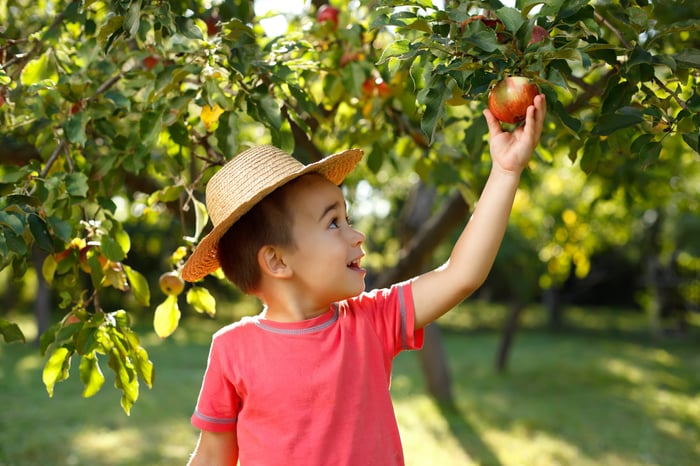 As noted above, the third and fourth quarters are key to AgroFresh's performance, so it's important to look at the impact of the fourth quarter on the full-year numbers:

AgroFresh's results always tend to be stronger in the second half of the year because it's when the northern hemisphere harvest, and particularly the apple harvest, occurs. AgroFresh's key product is SmartFresh -- a product that keeps fruit fresh longer during transportation and storage. In the earnings call, CFO Katherine Harper specified that "SmartFresh apple revenue was 74% of total revenue, compared to 78% in 2016."

AgroFresh's reliance on apples (and SmartFresh) means its results are strongly tied to the harvest level, and the 16% fall in the European crop last year had an impact. However, CEO Jordi Ferre explained that the company "put commercial plans in place and work[ed] with our customers, resulting in a 17% increase in SmartFresh penetration of the European apple market versus 2016," which helped offset the effect of the diminished harvest.

To reduce reliance on apples and SmartFresh, and increase revenue, management plans to develop SmartFresh sales outside of its core apple market. It is also aiming to improve sales of other products, such as Harvista (which helps expand harvest windows) and Ripelock (a quality-management system for bananas). In addition, its investment in Tecnidex (a provider of fungicides, waxes, and sanitizers, mainly to the citrus industry) will also help generate income from new sources.

Ferre pointed out that "20% of our total SmartFresh revenues" came from "crops other than apples, and that proportion is on the rise." Meanwhile, full-year Harvista revenue grew 18%, and the acquisition of Tecnidex provides some instant diversification. Nevertheless, Ferre also cautioned that "the ongoing transition of our product mix including Tecnidex will result in some gross margin compression in 2018."

Where next for AgroFresh Solutions?

All told, AgroFresh's increased penetration rate in the European apple market offset the big fear that AgroFresh investors always carry -- weak apple harvest -- and management's plans to diversify its revenue streams appear to be gaining traction. Yet its fortunes are still tied to the apple market to a large degree.