Please ensure Javascript is enabled for purposes of website accessibility
Log In Help Join The Motley Fool
Free Article Join Over 1 Million Premium Members And Get More In-Depth Stock Guidance and Research
By Lee Samaha - Nov 10, 2017 at 6:46AM

The produce freshness-solutions company did a good job under difficult circumstances in its third quarter.

Superficially, the third-quarter earnings from AgroFresh Solutions, Inc. (AGFS -5.03%) weren't anything to write home about, but a closer look reveals some underlying positivity. Management has been busy diversifying the company's revenue streams and cutting costs, and some of the benefits are starting to come through. Let's take a look at the results in more detail. 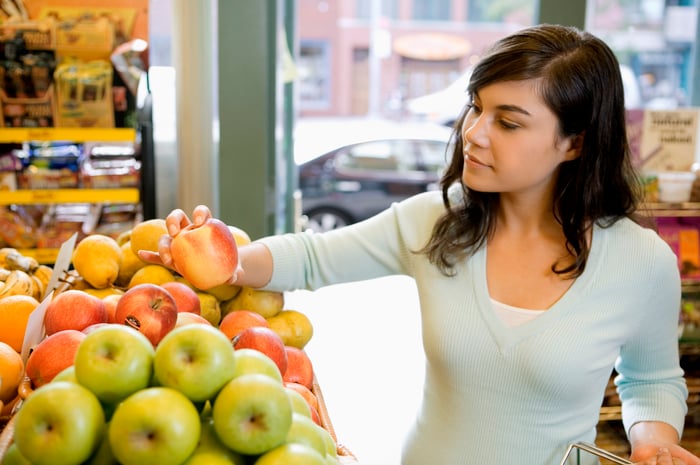 Bearing in mind that this is AgroFresh's biggest quarter of the year -- because it's the time when revenue from the Northern Hemisphere harvest starts to hit -- the numbers are somewhat disappointing. Gross margin was lower, and it's only because of lower interest payments and some cost-cutting that net income increased.

What actually happened in AgroFresh's quarter

That said, AgroFresh was subject to some unfortunate conditions in apple harvest in the quarter. Apples matter to the company. For example, going back to this time last year, solutions sold to treat apples accounted for around 84% of AgroFresh's sales, and they primarily came from its SmartFresh product, which keeps fruit -- primarily apples -- fresh during storage and transportation.

Turning attention back to the current quarter:

The latter issue isn't necessarily a problem, as it just implies a shift of revenue to the fourth quarter. CFO Kathy Harper suggested there wouldn't be an impact on margin due to the shift: "We do expect margins to hold in terms of the puts and takes on the timing."

However, the reduced apple crop in Europe is obviously an issue. The good news is it was offset by increasing penetration of SmartFresh in the apple market in Europe and by driving growth in other crops. In particular, sales to the pear market increased by 33%. In addition, CEO Jordi Ferre claimed, "We are introducing new products and seeing growth of our existing products beyond SmartFresh."

When asked how much share the additional products and services (predominantly non-SmartFresh) made up of AgroFresh's revenue, Ferre replied, "I think we will report later the percentage of how much is that, but I can tell you that maybe it's about 20%." Clearly, SmartFresh is still key to AgroFresh's earnings.

Ferre's aim is to increase end-market and product diversification so as not to leave the company so exposed to the apple harvest in the future. To that end, the announcement of an agreement to take a controlling interest in Tecnidex (fungicides, waxes and sanitizers) was positive. Ferre said the acquisition would immediately contribute to profits, and because 80% of Tecnidex's revenue goes to the citrus industry, the deal brings diversification for AgroFresh.

It's clear that the apple harvest still dominates AgroFresh's immediate prospects, but management did a good job of reacting to a disappointing European harvest. Going forward, investors will be looking for a confirmation of the revenue shift into the fourth quarter from the North American harvest and more evidence of sales development with non-SmartFresh products.