Please ensure Javascript is enabled for purposes of website accessibility
Log In Help Join The Motley Fool
Free Article Join Over 1 Million Premium Members And Get More In-Depth Stock Guidance and Research
By Lee Samaha - Updated Mar 10, 2017 at 11:45AM

The agricultural technology company delivered results within its guidance range and stepped up efforts to generate sales growth.

AgroFresh Solutions (AGFS -2.36%) needed to steady the ship after a difficult few quarters. After discussing increasing market competition for its core SmartFresh product and lowering its forecast for the U.S. apple harvest in 2016 on the third-quarter results presentation, management was under pressure to demonstrate it was back on track in the fourth quarter. The good news is that AgroFresh pretty much did that. In addition, management outlined some strategic actions taken to create growth. Let's analyze what happened in the quarter.

The headline numbers came in at the low end of guidance given in the third quarter:

It was a slightly disappointing set of results from a headline perspective, particularly so when you remember that the third-quarter guidance was also substantially lowered from the second quarter -- largely a consequence of the U.S. apple harvest (SmartFresh's core market) coming in lower than previous expectations.

Indeed, management disclosed it would use the "average of the past five years rather than follow the latest crop projections" as a basis for company guidance. 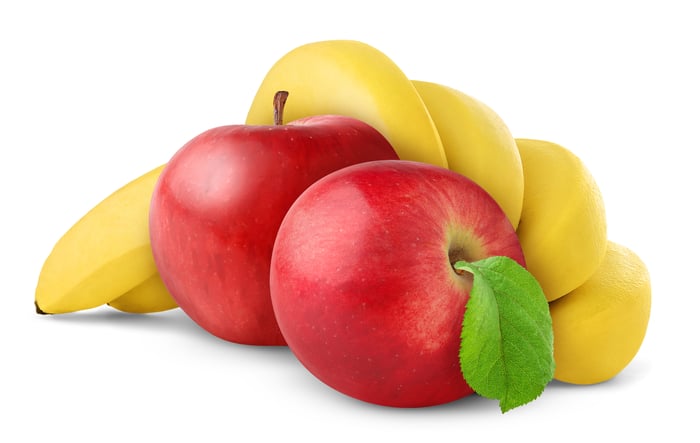 AgroFresh is trying to bring solutions into the banana market, too. Image source: Getty Images.

CEO Jordi Ferre expects a slight decline in gross margin for 2017, but expects cash flow to be significant. Moreover, selling, general and administrative (SG&A) expenses are expected to decrease to a run rate of $11 million in the quarter. As one analyst pointed out, this implies $44 million in SG&A for the full year -- a significant reduction from the $61.8 million reported in 2016.

Given that adjusted EBITDA was only $77.5 million in 2016, this means EBITDA should rise substantially in 2017 simply on the basis of SG&A reductions and only a slight dip in gross margin.

In short, there is nothing in the growth plan that would surprise investors, but then again AgroFresh wouldn't be the first company to hire a strategic consulting firm to hear exactly what they already know.

No matter. Ferre plans to maximize profitability with SmartFresh by transforming it into a "complete quality system" by complementing its post-harvest solution with pre-harvest services -- which could include selling Harvista as part of the SmartFresh system. Meanwhile, AgroFresh's plans to expand SmartFresh sales into new crops and new geographies continue.

Clearly, AgroFresh's management has its hands full in 2017 as it battles increasing competition in its core markets even as it tries to expand sales of its lesser-known products such as Harvista and RipeLock. That said, its sales are somewhat contingent on the apple harvest (particularly in the Northern Hemisphere), and investors will be hoping for a good crop this year. That would help AgroFresh boost cash flow in order to buy new technologies and expand marketing efforts with some of its newer products.