AgroFresh Solutions, Inc. (NASDAQ:AGFS), a company offering freshness solutions to growers of produce, pleased investors by reporting progress on its plans for 2017. Not only were its headline numbers better, but management also outlined improvements made from the implementation of its growth strategy. Let's take a closer look at the details from the quarter.

Going back to fourth-quarter earnings, management's expectations for 2017 involved revenue growth accompanied by a slightly lower gross margin but significantly reduced selling, general, and administrative (SG&A) expenses. It all was intended to lead to a large increase in EBITDA (earnings before interest, tax, depreciation, and amortization) and good cash flow.

The good news is that the first-quarter results were in line with these expectations:

As you can see above, the company's results were in line with its overarching expectations, but to be fair, the first quarter, and indeed the first half of its fiscal year, aren't the key to its full-year earnings. For example, in 2016 the first quarter generated only 17.8% of full-year sales, while the first half was responsible for just 29.3% -- because AgroFresh is still largely reliant on the apple harvest in fall in the Northern Hemisphere. 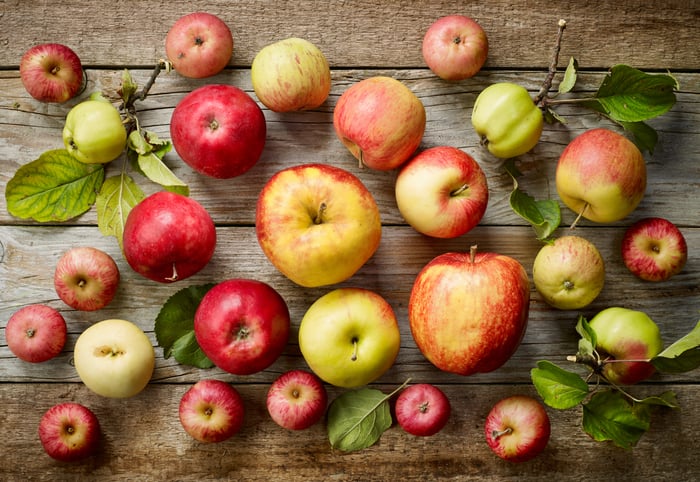 Two key parts of AgroFresh's growth strategy involve strengthening its core post-harvest business -- mainly SmartFresh (which manages fruit ripening) and to a much lesser extent RipeLock (a fruit-quality management system for bananas) -- and refining its pre-harvest business -- Harvista (which expands the harvest window) and LandSpring (which reduces stress on seedlings).

Progress was made on both fronts, with management citing SmartFresh growth in Brazil and Chile and Harvista growth in Argentina -- recall that it's the Southern Hemisphere harvest that counts in the first half for AgroFresh. The core post-harvest business is described as "stabilizing."

Harvista grew sales in double digits compared to the same quarter of 2016. All told, Latin American sales were up 20% -- helped by a slightly earlier harvest -- but Australia and New Zealand sales were down 12% due to a later harvest.

In a nutshell, it was a pretty good quarter for AgroFresh in the Southern Hemisphere, as SmartFresh defended its market share from competition and Harvista grew sales strongly. Moreover, more than 40% of the growth in the first quarter came from non-apple end markets -- implying that AgroFresh is starting to diversify its income streams.

All told, it was a good quarter for AgroFresh, and CEO Jordi Ferre must have felt a lot better than he did on his first earnings call in November -- when the stock fell nearly 50% on weak earnings. That said, it's the second half that counts for AgroFresh, and investors will be hoping for a good apple harvest, and that prices won't have to be cut on SmartFresh, as they were last year, to defend its market share from competition.