It was a relatively uneventful quarter for AgroFresh Solutions, Inc. (NASDAQ:AGFS), and that's fine for investors. The company's earnings reports have caused a significant amount of stock price volatility in the past. However, this time around the results were pretty much as expected, and investors slept soundly after them. That said, what really matters for the company are the upcoming quarters (which contain the northern hemisphere fruit harvest). With this in mind, let's take a look at the results and commentary from the second-quarter earnings report.

Starting with headline numbers from the quarter:

Superficially, the results are disappointing, but AgroFresh's results are subject to what CEO Jordi Ferre described on the earnings call as "seasonal timing differences that can shift revenue between quarters in the southern hemisphere." With regard to 2017, it's better to consider AgroFresh's results on a first-half basis, because revenue that might usually be reported in the second quarter was shifted into the first quarter this year. 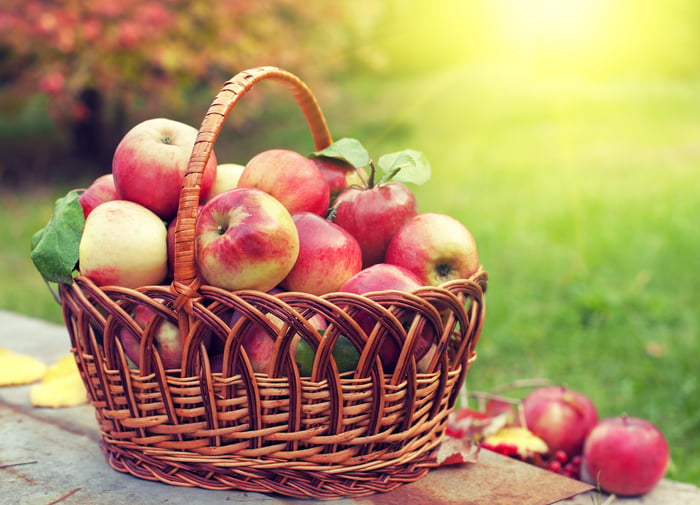 The upcoming apple harvest is the key to AgroFresh's prospects in 2017. Image source: Getty Images.

Indeed, a look at the first-half results reveals a solid performance:

As you can see above, AgroFresh's revenue, cash flow and underlying earnings grew solidly in the first half. On a more negative note, CFO Kathy Harper noted that "operating expenses in the quarter came in somewhat higher than originally planned" although she promised an "improvement in this area over the second half of the year as we take more deliberate actions to reach the $11 million per quarter goal to which we committed."

Given that selling, general, and administrative costs were $13.4 million in the second quarter, AgroFresh clearly has a job to do to meet Harper's target of a run rate of $11 million.

All told, the first-half results were solid enough, but it's worth remembering that AgroFresh could generate $180 million in revenue for the full year. In other words, the company is likely to generate 2.7 times its first-half revenue across the third and fourth quarters when its northern hemisphere harvest revenue kicks in.

Ferre sounded a cautionary note with regard to the upcoming quarters by referencing the "late frost in Europe this year," something that could negatively impact the apple crop harvest this year. He argued that AgroFresh's "new expanded service strategy" would help reduce any negative impact, but it's hard to be completely confident.

Gross profit margin "could" decline slightly according to Ferre, but this is in line with the guidance given on the first-quarter earnings call.

All told, the first-half results met expectations, but as ever, it's the second half that counts, and it's subject to the vagaries of the northern hemisphere harvest. Meanwhile, management needs to do a better job of cutting expenses, the key driver of its expected underlying earnings growth in 2017.