Although the headline numbers from the first-quarter earnings report of produce freshness-solutions company AgroFresh Solutions, Inc. (NASDAQ:AGFS) were relatively uneventful, the company is quietly laying the groundwork for growth. Let's take a look at what happened and how AgroFresh is making progress on its plan to grow significantly in the future. 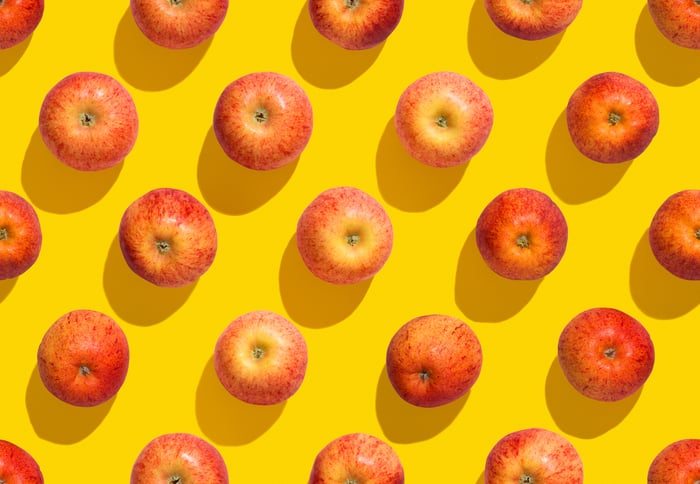 It still is all about apples for AgroFresh Solutions. Image source: Getty Images.

Details behind the headlines

The net sales increase largely was due to the acquisition of a controlling interest in Tecnidex (which produces fungicides, waxes, and sanitizers, mainly for the citrus industry), but core sales were flat. However, CFO Kathy Harper explained that $1 million in revenue was deferred due to an accounting change. Without this organic growth, it would have been 3%.

Tecnidex also impacted gross margin by reducing it 400 bp, and increased sales of Harvista (a product that expands harvest windows) had a negative impact on gross margin of 100 bp. Meanwhile, the accounting change had a 300 bp impact, and what the company calls "other" factors were responsible for 200 bp.

How AgroFresh is preparing for growth

There's no way of avoiding the elephant in the room: AgroFresh's fortunes still are largely tied to apples and its key SmartFresh product (which keeps fruit fresh longer during transportation and storage). Unfortunately, the last couple of years have seen declining apple harvests, notably in the company's key Northern Hemisphere market. That said, management isn't standing still and continues to take measures to grow sales.

All told, AgroFresh is reducing its dependence on apples and SmartFresh.

Moreover, management plans to expand revenue to around $500 million in the next five years (from $164 million in 2017), with what Ferre described as a "50-50" combination of organic and acquisition-led growth. In other words, expect more acquisitions to come. However, Ferre also outlined that, just as with Tecnidex, there's likely to be margin compression as a consequence.

Heavy exposure to the apple harvest hasn't been kind to AgroFresh in the last couple of years, but that means a good harvest this year in the Northern Hemisphere could lead to a significant improvement in near-term prospects. Ferre said that it was "fair to expect that the volume of apples in Europe will be up" but was far less certain of the outlook in North America.

No matter: The company is growing non-apple-based revenue and preparing for RipeLock to "gain a foothold in the retail food industry," with expectations for "2018 to be a turning point" for the product, according to Ferre.

Putting all this together: AgroFresh's results may look mediocre right now, but that could all change with a good apple harvest, growth in non-SmartFresh products, and some timely and well-chosen acquisitions.