I don't think anyone was predicting that NVIDIA, Trex Company, and frack sand stocks would have a great 2016.

If everyone were able to predict huge gains for every individual stock that goes on to achieve them, we would all be sitting on mountains of cash. The reality is that there are loads of stocks that post huge gains that are either hard to explain or foresee. Sometimes, those huge gains are merited. Other times, they're a mystery and may just be Wall Street spinning the wheel of speculation.

We asked three of our contributors to highlight a stock or two that they didn't foresee as having a great 2016 but has so far posted huge gains. We also asked if they think those gains are sustainable or just a flash in the pan. Here's what they had to say.

It's hard to process these incredible gains

Steve Symington: Shares of NVIDIA (NVDA 1.45%) have climbed an impressive 89% year to date as of this writing. But despite the fact that I pounded the table for investors to buy shares of NVIDIA in both December 2015 and January of this year, I can see why some may have been hesitant to jump on board with what has turned out to be one of 2016's biggest winners so far.

After all, NVIDIA stock also climbed more than 60% in 2015, as the company not only enjoyed growing demand overall for discrete graphics cards but also steadily grew its share of the lucrative market to nearly 80% by the end of last year. What's more, the good times appeared to have come to an end by the middle of February, as the market endured a historically painful start to the year, pulling shares of many high-flying tech stocks -- including NVIDIA -- down with it. But we all know how that turned out after a few strong quarterly reports: 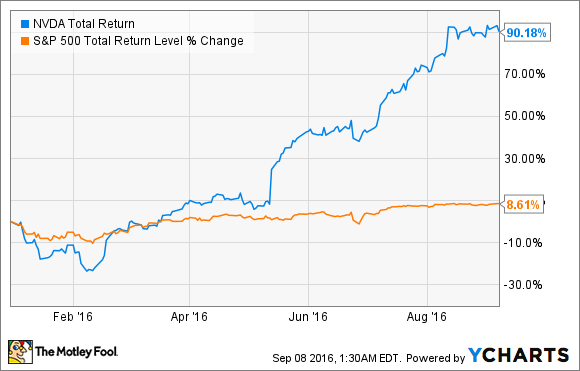 In fact, NVIDIA showed no signs of slowing down when it absolutely crushed expectations with its second-quarter 2016 report a few weeks ago. Quarterly revenue grew 24% year over year to $1.43 billion, including a 68% increase in automotive sales as more vehicles embraced NVIDIA's Tegra chips for in-car infotainment systems. Data center sales also more than doubled year over year, thanks to strong demand for NVIDIA's Pascal-generation GPUs and increasing interest in the deep learning applications enabled by NVIDIA's tech.

In my experience, winners tend to keep on winning. As long as NVIDIA keeps driving innovative solutions to tackle the world's growing list of more computationally demanding tasks, I think the stock will also continue to achieve market-beating returns for long-term investors willing to watch the company's story unfold.

Going after a billion-dollar opportunity 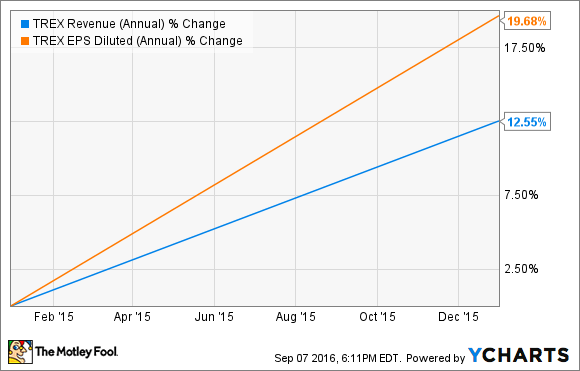 So what's happening in 2016? In short, supercharged profit growth. Through the first half of the year, Trex has grown revenue about 8% (core sales are actually up about 10% when adjusting for a shift in polyethylene sourcing), but has seen net income shoot up 29% on improved operating leverage, as the company's efforts to improve manufacturing efficiencies pay off.

Maybe the best part of the story for Trex investors is that there's a huge opportunity to continue growing for many years to come. Despite the dominant 40% market share the company already has in the wood-alternative decking segment, Trex is only scratching the surface of the entire wood decking industry. Through last year, Trex's total product volume was equal to about 7% of total decking sold in North America, with traditional wood commanding nearly 85% of that market.

For years now, Trex has continued to grow sales faster than the larger industry and should be able to continue taking more market share for many years to come. Even after the strong run-up in its shares so far this year, the best might still be yet to come for Trex shareholders.

Tyler Crowe: One thing that has been a bit surprising so far this year has been the performance of frack sand stocks, notably Emerge Energy Services (NYSE: EMES), Hi-Crush Partners (HCRS.Q), and Fairmount Santrol Holdings (NYSE: FMSA). 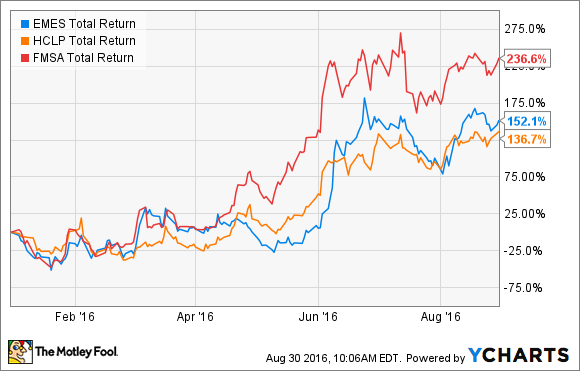 What is so surprising about this rebound is that for most of the year, total oil and gas drilling activity has actually declined. One proxy for this is the U.S. active land rig count, which hit the lowest level since we started keeping track of that sort of stuff. On the surface, this should mean that sand demand continues to decline, and these companies' prospects should still be dwindling. 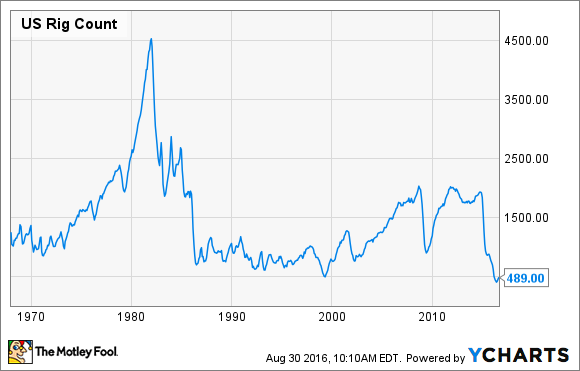 To add another layer of complexity to this story, all three companies have taken on huge levels of debt and have been at the point where they have either breached debt covenants or have had to renegotiate their debts with creditors. The combination of these two factors would mostly suggest that an investor stay away.

There are two likely reasons these stocks have climbed. The first is that oil prices have risen, so some may be trying to jump the gun and take a bite of these companies before a demand rebound. The other is that these large gains are just a drop in the bucket compared to the declines we have witnessed over the past couple of years. 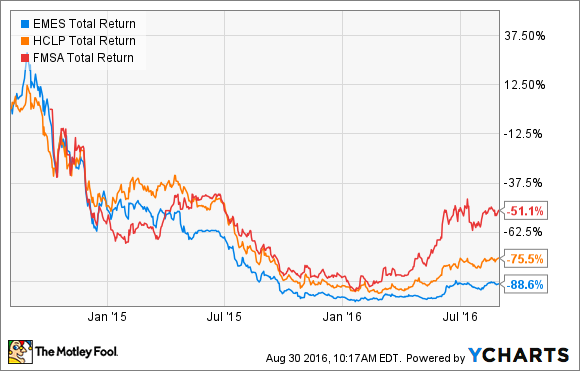 Do these companies still have room to run in 2016? Yes, but that is entirely up to oil and gas prices and overall drilling activity. That means that Emerge Energy Services, Hi-Crush Partners, and Fairmount Santrol Holdings are speculative bets at best, and you should invest accordingly.

The Power of Dividends in 3 Charts: Highlighting NVIDIA and American Water Works Stocks