Looking to add a few positions to your portfolio that will give it a better chance of succeeding in 2016? We think you should check out Best Buy, Halliburton, NVIDIA, Core Laboratories, and Priceline.

Last year offered little to write home about when it came to stocks. The S&P 500 gained a measly 1.4% after adjusting for dividends. Given the mediocre year, shrewd investors will be looking to start 2016 off right by adding new positions to their portfolios.

We asked five of our contributors to highlight a stock they think is a good buy right now. Here's what they had to say:

Tim Green: It may seem strange for me to recommend a retailer as a top stock to buy in January, given the terrible performance of the retail sector over the past year. However, it's my opinion that Best Buy (BBY -0.15%) has a lot going for it, including a valuation that bakes in too much pessimism.

Best Buy is in the midst of a turnaround, and the company has invested heavily over the past few years in price competitiveness, e-commerce, and other initiatives meant to spur growth. These actions have been paid for by aggressive cost cuts -- over $1 billion in total. This may seem like short-term thinking, but Best Buy has increased employees in its stores, made its supply chain more efficient, and removed layers of unnecessary bureaucracy.

By focusing on customer service, competitive prices, and an omnichannel strategy, Best Buy has returned the domestic business to growth. During the third quarter, domestic same-store sales grew 0.8% year over year, while Best Buy's non-GAAP operating margin jumped 40 basis points. This may not look all that impressive, but the consumer electronics market as a whole declined by 4.3% during the third quarter, according to NPD, implying that Best Buy may be gaining market share.

Despite Best Buy's progress, the market is valuing its stock pessimistically. Over the past 12 months, Best Buy generated about $1 billion of free cash flow, and with roughly $1.7 billion of net cash on the balance sheet, the stock currently trades for around nine times the free cash flow after backing out that net cash. A successful turnaround, coupled with a bargain valuation, makes Best Buy a top stock to buy in January.

Matt DiLallo: Investors with a long-term mind-set and a stomach for volatility should take a close look at Halliburton (HAL -0.07%). Like many in the sector, it's been hit hard by the downturn in the oil market, with the stock now off roughly 55% since oil prices started to slide in mid-2014. What's unique about Halliburton's situation is that it's not only dealing with the pressure from weak crude prices, but also from worries that its pending merger with rival Baker Hughes (BHI) won't pass muster with regulators. This uncertainty creates an interesting long-term opportunity.
While there have been conflicting reports surrounding the Baker Hughes deal, Halliburton remains confident that it can find the right combination of asset sales to appease regulators. That's one reason the company agreed to extend that deal's deadline until the end of April, after insisting that it wouldn't agree to an extension unless it saw a clear path to approval. Clearly, the company sees a light at the end of the tunnel.
In combining with Baker Hughes, Halliburton will improve what is already a strong oil-field service franchise in North America. That's important because Halliburton believes that once oil prices start to rebound, North America will be the first region to see an increase in oil and gas activity. That's due to the shorter cycle nature of shale plays as well as the fact that its customers face a drill-or-die future.
While it is anyone's guess when oil prices will rebound, Halliburton presents a compelling way to invest in the one place with the most upside when conditions improve.

Steve Symington: Shares of NVIDIA (NVDA 4.28%) have started 2016 on a rough note, falling nearly 10% over the past few days. But that's not to say NVIDIA deserves its recent discount; the fall came on no company-specific news but rather as a result of a broad-market decline.

In fact, if NVIDIA's showing at the 2016 CES conference in Las Vegas earlier this month is any indication, it seems fair to say the graphics chip specialist is as strong as ever. Most notably, NVIDIA kicked off the conference by revealing DRIVE PX 2, a powerful new in-vehicle artificial intelligence platform to handle the immense computational needs of self-driving cars. Keeping in mind that more than 50 automakers have already adopted NVIDIA's AI platform for antonymous driving development since it released the first iteration of DRIVE PX last year, this should accelerate this multibillion-dollar market opportunity and reduce NVIDIA's reliance on its bread-and-butter gaming GPU business.

In the meantime, that business is doing just fine. In November, NVIDIA shares popped after the company reported 6.5% year-over-year revenue growth, a 17.9% increase in adjusted earnings per share, and continued strong free cash flow (around $1 billion over the past year alone). NVIDIA also announced plans to increase its quarterly dividend by 18%, and will return $1 billion to shareholders through dividends and buybacks in the coming fiscal year.

You won't find long-term shareholders complaining today, as NVIDIA stock is still up around 50% over the past year on the heels of this strength. For investors willing to take advantage of its recent pause, I think NVIDIA will continue its upward march.

Tyler Crowe: One company's stock that has taken an unjustified beating is Core Laboratories (CLB -0.46%). Core's top line has suffered just like every other oil and gas equipment and services company over the past 18 months, but one thing that it's been able to do better than its peers is to maintain pricing power and margins. 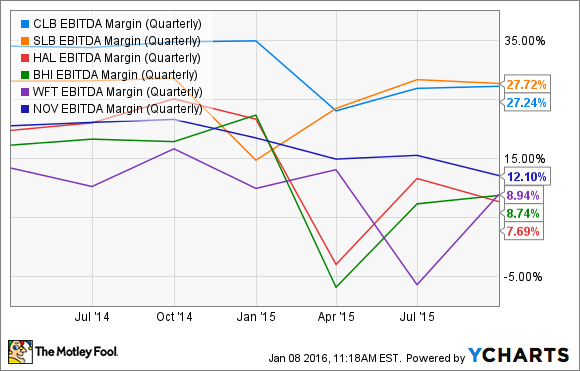 Core has been able to do this because the services it provides to oil and gas producers help improve the economics of their wells. It does so by developing production strategies to cut costs and ensure greater production. This means that producers are willing to pay up for Core Labs' services. Its niche offerings also mean that its services aren't facing much competition from the other major oil services firms.

Shares are down close to 55% since oil prices started to roll over in 2014, but the company is still generating free cash flow and has a squeaky clean balance sheet. This suggests to me that it's in fine shape to manage lean times. Like Matt said in reference to Halliburton, there's no way to know when oil prices will rebound; but producers will be lining up for Core Lab's services when they do. An investment now while its shares are down could reap big rewards later on.

Brian Feroldi: The craziness in the currency markets has wreaked havoc on companies that do business in foreign markets. That's especially true for The Priceline Group (BKNG 2.77%). Because the majority of its revenue and profit are generated overseas, the strength of the dollar makes it look like Priceline's days of rapid growth are over.

If you look past the headline numbers, however, you'll see that Priceline is growing at an impressive rate. Revenue and gross profits soared by 22% and 29%, respectively, in the most recent quarter on a constant-currency basis. That's terrific growth for a company of its size, and it's likely that its fast growth will continue in the years ahead, as travel businesses around the world continue signing up for its reservation platform. Priceline now boasts 820,000 properties signed on to its Booking.com. That's 38% higher than the year-ago period and represents more than 21 million bookable rooms.

Wall Street hasn't been impressed with its results, sending Priceline's shares down more than 20% from recent highs. It looks to me like traders are placing too much emphasis on short-term factors and ignoring the strength of the company's overall business.

Priceline's shares are trading hands at about 17 times its 2016 earnings estimates, and even with the currency craziness, Wall Street believes the company will grow its profits by more than 15% over the next five years. That's a bargain valuation for a high-quality company.