Steve Symington, Neha Chamaria, Daniel Miller, Matthew DiLallo, and Timothy Green
(XMFSymington)
Author Bio
As a technology and consumer goods specialist for the Fool, Steve looks for responsible businesses that positively shape our lives. Then he invests accordingly. Enjoy his work? Connect with him on Twitter & Facebook so you don't miss a thing.

Summer is quickly coming to a close, but that doesn't mean there aren't still bargains to be found in the stock market. While you've been searching for the perfect blend of sand and sun this month, we've been looking for businesses that offer an enticing combination of growth potential and relative stability.

One group that fits that mold well are mid-cap stocks, which generally have a market capitalization somewhere in the range of $2 billion to $10 billion. So we asked five Motley Fool contributors to each pick a mid-cap stock they believe investors would be wise to buy in August. Read on to see which they chose, and why.

Steve Symington: The market reacted badly to OLED specialist Universal Display's (NASDAQ:OLED) seemingly disappointing second-quarter results earlier this month. But I think the stock's drop is a gift for patient investors with the foresight to jump in and participate in Universal Display's compelling long-term story.

As I noted shortly after the report, management has repeatedly called 2016 a "year of building," while display makers invest billions of dollars into bolstering their OLED manufacturing capabilities as the technology becomes more ubiquitous. In addition to OLED's central role in differentiating the displays on Samsung's mobile devices, for example, LG Display is ramping its OLED television manufacturing efforts as we speak (with plans to ship around 1 million units this year, up from 400,000 in 2015). And industry watchers point to mounting evidence that Apple is in the process of expanding its use of OLED from the Apple Watch into its massively popular iPhone line, which would arguably mark the industry's most significant departure to date from using LCD technology.

To be fair, Universal Display did reduce its revenue guidance for 2016, saying its impending ramp in revenue growth will be delayed about six months as customers optimize their use of its new higher-margin OLED emitter materials ahead of their respective manufacturing capacity expansions. But while the fickle market hates being told to "hurry up and wait," that doesn't change the company's long-term potential. So with shares having pulled back more than 18% from all-time highs as of this writing, I think now is a great time to open or add to a position in Universal Display.

Tim Green: The argument against buying Staples (NASDAQ:SPLS) sounds convincing – an office supply retailer in a world where demand for core office supplies like paper and ink is declining doesn't sound like a very compelling investment. Add to that the rapid growth of online-only retailers like Amazon, and it's no wonder that Staples stock has been beaten down over the past 18 months.

But Staples is not just a retailer. The company's commercial business, under which it signs long-term contracts with large organizations, has become a bright spot for the otherwise struggling company. Over the past few years, Staple has greatly expanded the assortment of products that it sells to its commercial customers, allowing the commercial business to grow while its retail arm shrinks.

Unlike Staples' retail stores, which are highly susceptible to online competition, the commercial business will be tougher for a company like Amazon to break into. Staples' commercial business operates a network of 61 fulfillment centers separate from those tasked with stocking its stores, allowing the company to quickly fulfill orders, delivering many on the next business day for free.

Staples expects to generate around $600 million of free cash flow this year, despite the difficulties it's experiencing in its retail and international segments. Given its market cap just shy of $6 billion and a dividend yield topping 5%, investors aren't giving Staples enough credit.

Expect to be richly rewarded with this stock

Neha Chamaria: One mid-cap stock that has caught my attention right now is Oshkosh (NYSE:OSK). While its largest business -- access equipment -- continues to face macro headwinds, its rapidly growing defense and fire and emergency equipment businesses are helping offset some of that weakness and pushing earnings higher. During the last quarter, its defense segment swung from a loss of $7 million to a profit of $19 million, while fire and emergency profits more than doubled year over year. Encouraged by those numbers, Oshkosh even raised its 2016 EPS guidance to a $2.60 to $2.80 range from its previously projected $2.30 to $2.70 range.

Granted, Oshkosh's upgraded guidance is still below its 2015 earnings, but its growth prospects are looking brighter. Oshkosh is particularly upbeat about its defense business as it scales up production of its Joint Light Tactical Vehicles, which it will start delivering to the Defense Department later this year as part of a multiyear, multibillion-dollar contract that's expected to fetch the company hefty profits. Meanwhile, defense top line should also get a boost over the next year as Oshkosh fulfills deliveries against a pretty large order for all-terrain vehicles that it bagged earlier this year.

These defense contracts should play a key role in boosting Oshkosh's profits and cash flows going forward. In fact, if the company can expect to generate free cash flow worth $400 million this financial year despite the depressed access-equipment markets, one can safely expect its FCF to grow at a much faster clip once primary markets recover. For shareholders, that should mean greater rewards, given that Oshkosh aims to return half its FCF in the form of dividends and share buybacks.

Matt DiLallo: Over the past two years, the oil market has gone through one of its worst downturns in decades. This is putting tremendous downward pressure on financial results sectorwide, including those of oil-field service company Core Labs (NYSE:CLB): 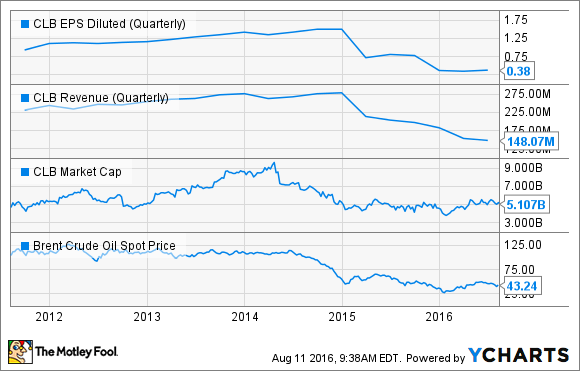 That said, the company firmly believes that a recovery is about to unfold. In fact, it recently reconfirmed its belief that the second-quarter marked the bottom of what it believes will be a "V-shaped" recovery in both the oil market and its financial results. Driving this belief is its view that worldwide oil production will continue to fall, which, when combined with growing demand, "should create a tight crude oil supply market for the second half of 2016, and result in increased crude prices and industry activity levels worldwide."

Because of that outlook, the company anticipates that its third-quarter results will increase sequentially over the second quarter, and that earnings will continue to recover in subsequent periods. That should fuel a rebound in the company's stock price, which like its earnings has the potential to rebound sharply over the next year or so. It is that possibility of a sharp near-term rebound that makes Core Labs an enticing mid-cap stock to consider buying this month.

Daniel Miller: Most investors wouldn't recognize the largest seller of affordable diamond, gold, and silver jewelry in the United States by the name Signet Jewelers Limited (NYSE:SIG), but they might recognize the chains it owns -- Jared, Kay, and Zales. This is an intriguing company for a couple of reasons, and unlike its diamonds, its stock is selling at a steep discount in August.

One aspect about Signet investors should love is that it operates in an industry that has long been dominated by smaller, single-location retailers. With its size and scale advantage, it can do many things its competition can't, such as leverage its order size to drive pricing down, and drive consolidation.

Even better, the company's size and healthy balance sheet enables it to offer customers the opportunity to purchase large-ticket  items such as engagement rings on credit. That's something smaller competitors typically can't afford to do, giving Signet yet another advantage.

So, why is the jewelry chain owner selling at a fairly significant discount in August? That's simple: the doom and gloom surrounding the United Kingdom's economy. In addition to its leading position in the U.S. market Signet also has significant operations in Canada and the U.K. The latter generated a little more than 11% of revenue during fiscal year 2016.

The world knows that the U.K. voted to leave the European Union, but it will be a while before anyone fully understands the negative implications Brexit will have on business and trade. That uncertainty has sent Signet to a forward price-to-earnings ratio of less than 9, according to Morningstar's forward estimates. However, in my opinion, the situation will work itself out over time and Signet's stock will recover. And, after all, diamonds are forever. (Sorry, I had to.)