Nike (NYSE:NKE) is among the best investments you can make. Since the company's IPO, it has produced a total return -- including dividends and price appreciation -- of better than 43,000%. The company has done an amazing job harnessing the power of its brands to generate steady returns for decades.

Being able to replicate that performance will be incredibly hard to do, but there are some companies out there with a shot at doing so. So we asked three of our investing contributors to each highlight a stock they see as being able to post future returns that could surpass Nike. Here's why they picked Amazon.com (NASDAQ:AMZN), American Tower (NYSE:AMT), and NVIDIA (NASDAQ:NVDA) 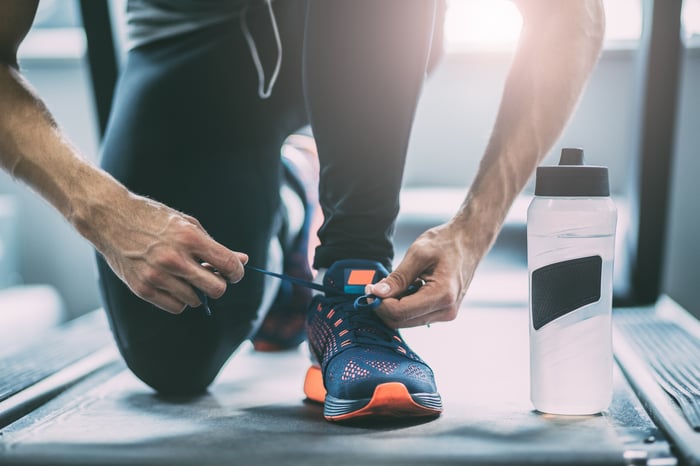 Brian Stoffel (Amazon.com): It's somewhat fitting that Amazon and Nike recently announced an agreement whereby the latter will start actively selling its goods on the former's platform.

I say "fitting" because while Nike has returned an impressive 18% per year  for investors since going public in 1981, that figure is put to shame by Amazon's compounded average of 36% per year as a public entity. It goes to show one key thing: Platforms trump brands.

As former Fool Todd Wenning recently wrote, in the business world, there are only four real competitive advantages a company can have:

The first two tend to be extremely strong. The third is powerful while it lasts, and intangible assets -- in my opinion -- provide a much narrower moat. Think about it: There's really nothing to separate a Nike shoe from that of a potential competitor, other than the ubiquitous Swoosh. That being said, Nike has parlayed that Swoosh masterfully into market-thumping returns.

But Amazon benefits from many moats. Third-party sellers -- like Nike -- are more willing to sell on Amazon because there's so much traffic to the site, and that only increases incentives for consumers to shop there (network effect), it's virtually impossible to get a better deal than Amazon Prime (switching costs), and no one can afford to offer the quick delivery of packages -- thanks to its network of fulfillment centers -- than Amazon (low-cost service).

Tyler Crowe (American Tower): American Tower doesn't have the name recognition of an iconic brand like Nike, and chances are most people will never see anything American Tower does. What it does do, though, is essential to the way we use our smartphones -- and it's poised for growth that could rival that of Nike's.

American Tower a real estate investment trust that owns cellular towers and other installations for wireless equipment. Don't let the name fool you, though: More than 100,000 of the company's 150,000 owned tower properties are in international markets.

One of the most interesting aspects of American Tower is that as a lessor to communications companies, it is brand agnostic and can have equipment for multiple carriers on a single installation. This is a large part of the value proposition for the company, as the rates of return for multiple tenant installations are much better than single-tenant towers are. With wireless providers needing to install more and more equipment to meet the demands of faster data speeds and increased data consumption, American Tower has grown its business by double digits for 17 consecutive quarters.

That trend is likely to continue for some time, too, as the company is in the process of acquiring more than 2,500 additional towers in Latin America. Management has been targeting countries where overall cellular penetration is high but total data use is low. In markets like this, cellular tower space can become a hot commodity awfully fast. If the company maintains this track of double-digit quarterly growth for a while longer, then it might not take long for it to catch up to Nike.

Powering the "brains" of so many new industries

John Rosevear (NVIDIA): Chip giant NVIDIA has rewarded plenty of investors recently. Its shares have risen over 1,300% in the past five years, and its growth shows no signs of stalling. 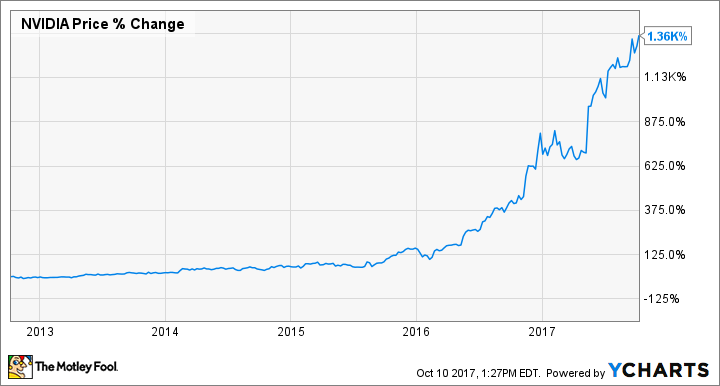 In fact, I think it might still be in its early stages. The key is that NVIDIA specializes in graphical processing units (GPUs), a type of computer processor that turns out to be especially well suited to handle the intensive data-processing needs of artificial-intelligence (AI) applications.

That's a market expected to get huge over the next few years. Anytime you hear the phrases "deep learning" or "machine learning" applied to a business or technology, that's AI. Cloud computing, self-driving cars, all sorts of robotics -- all of those emerging industries, and many more, are part of NVIDIA's potential addressable market.

NVIDIA has a second soon-to-be-huge opportunity in the emerging virtual-reality (VR) market, where its GPUs are already playing a leading role. VR is expected to be a $33.9 billion market by 2022 -- and NVIDIA already holds a little over 70% of the desktop GPU market. Translation: NVIDIA already has a dominant share in the machines that will power VR over the next few years.

NVIDIA faces competition in all of these spaces, of course, including heavy hitters Advanced Micro Devices in traditional computer GPUs (and thus VR), and Intel in the AI space, particularly around self-driving cars. But with NVIDIA, we can step back a bit and observe: The company has so many potential new markets emerging that its growth stands to be massive, even if it comes in second in some of them.