American Tower (AMT -0.50%) notched its 17th consecutive quarter of double-digit revenue and earnings growth thanks to continued robust demand for tower space. While recent acquisitions continue to play a significant role in driving that growth, the company also continues to sign up more tenants per tower, which drove solid organic growth during the quarter. American Tower doesn't anticipate that either trend will slow given that the world's seemingly insatiable demand for mobile data isn't expected to abate anytime soon. 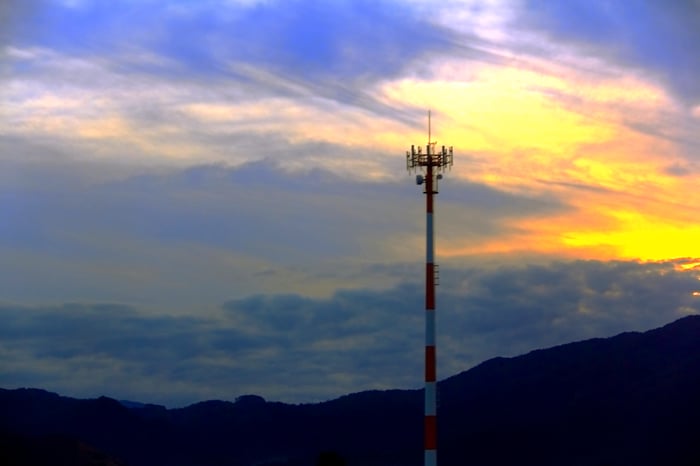 CEO Jim Taiclet commented on what drove results in the second quarter:

The second quarter of 2017 represented our 17th consecutive quarter of double-digit growth in property revenue, Adjusted EBITDA and Consolidated AFFO per Share, driven by strong demand for our tower real estate from Los Angeles to São Paolo to Paris. Organic Tenant Billings Growth in the U.S. of over 6% was complemented by Organic Tenant Billings Growth of more than 10% in our international markets, where the pace of advanced handset adoption and mobile data usage growth continues to require the addition of substantial network equipment on our sites.

American Tower's ability to deliver steady double-digit growth lies in its strategic decision to expand internationally. As Taiclet notes, organic growth alone on its international towers last quarter was in the double digits due to the rapid adoption of mobile data usage overseas. It's a trend he expects will continue for the foreseeable future as those markets catch up to the more developed U.S. market.

The international expansion strategy continues to pay big dividends for American Tower investors because the company is growing much faster than its U.S-focused rival Crown Castle International (CCI -0.47%). During the second quarter, for example, Crown Castle's revenue rose 8% while AFFO was up 12% year over year, whereas American Tower's revenue jumped 15.3% while AFFO surged 19%. Because of that faster growth rate, American Tower expects to continue increasing its dividend at a more rapid pace than Crown Castle. It's targeting annual growth of 20%, while Crown Castle sees its payout increasing by 7% to 8% annually, which is a slight improvement from its previous pace thanks to a major acquisition.

Thanks to the continued improvement in the foreign exchange market, American Tower sees currency fluctuations having an even more favorable impact on its results this year. Overall, it sees total property revenue rising 14.3% at the midpoint, which is up from its prior guidance of 13.9% growth. Furthermore, it sees AFFO rising 14.8% at the midpoint, up from its previous view that AFFO would increase 12.6% at the midpoint this year. Also, this forecast doesn't include the Latin American tower deals the company has in the pipeline, so it's possible that guidance could get another boost if those deals close as expected.

Looking further ahead, Taiclet stated: "As a result of the ever-increasing consumer appetite for mobile broadband and our strategic positioning in key markets spanning five continents, we believe that we are on track to sustain strong growth in Consolidated AFFO per Share and our dividend for many years to come."