Please ensure Javascript is enabled for purposes of website accessibility
Log In Help Join The Motley Fool
Free Article Join Over 1 Million Premium Members And Get More In-Depth Stock Guidance and Research
By Jeremy Bowman – Jul 3, 2017 at 11:33AM

Nike is selling on Amazon for the first time ever. Here's why it was the right decision.

The world's largest sportswear brand said last month that it would begin selling its wares directly with the world's largest online retailer after a decade of rebuffing Amazon's invitations. Nike stock rose about 2% when the news first broke, and CEO Mark Parker elaborated on the decision in the company's earnings call last week, saying Nike would begin selling a limited product assortment on Amazon as part of a pilot program.

Parker also said he sees the pilot as an opportunity to elevate the way the brand is presented on Amazon. Right now there are thousands of Nike products available, but those sales are going to third-party resellers rather than Nike itself. 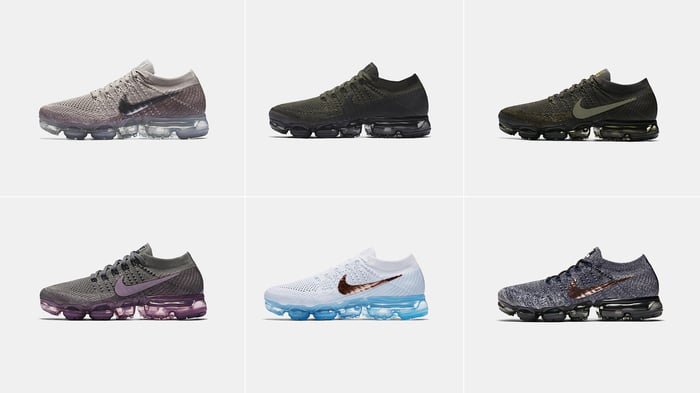 The Swoosh had long resisted Amazon as it wanted to have control of how its brand is marketed, displayed, and sold, preserving its status as a premium brand. The company has been particular about the retail channels it uses, relying on a partnership with Foot Locker, for example, for nearly 20% of its sales.

Times are changing, though, and e-commerce is on the rise. Let's look at a few reasons why Nike chose to partner with Amazon and why it was a smart move.

In some ways, Nike primes the sneaker resale market on purpose by releasing only limited runs of Jordans and other select shoes. That strategy has a way of boosting demand and creating a brand halo, but the effect of resellers on Amazon is different.

The e-commerce giant is by far the leading online retailer in the country, and with millions of products on its site it acts as a retail clearinghouse. It's the first place many shoppers look when they want to buy something on the internet, no matter what the product is.

A search for "Nike" on Amazon reveals more than 73,000 items for sale, but none of them are being sold by Nike or even approved partners. Instead, they're sold by third-party sellers who find discounted Nike goods, which are readily available thanks to recent bankruptcies like The Sports Authority's, and sell them for a mark-up on Amazon.

As part of Nike's agreement with Amazon, the e-commerce giant is suspending third-party sales of most Nike products on July 13, presumably the day the pilot starts. In other words, while Nike resisted Amazon in order to maintain control of its brand, it ended up losing it to third-party sellers on the site. Selling directly allows it to gain back control of its brand and get some of those sales back as well.

2. Meeting its customers where they are

Despite the fact that Nike has not sold directly on Amazon, it is still the #1-selling apparel brand on the site.

But rivals Adidas and Under Armour are close behind at #2 and #4, respectively. Those brands have long embraced Amazon, however. When the Kindle-maker first said it was making a push into apparel in 2008, Under Armour was happy to catch a ride on Amazon's soaring growth, and CEO Kevin Plank has called Amazon a "great partner." Adidas, which has sold on Amazon since 2014, has also reaped the benefits of its growth -- its chief told The Wall Street Journal, "Amazon is the best, without any comparison, transaction platform in the world." Adidas' North American sales have exploded recently, likely with the help of the e-commerce leader.

Nike is no stranger to e-commerce partners. It's been working with Alibaba's TMall and Zalando, a European e-commerce site, for more than five years, and CEO Parker said the company sees immense value in those relationships. It even once sold sneakers on Zappos, the online shoe retailer that Amazon bought in 2009.

Holding out on Amazon no longer makes sense. Nike's customers are there; its competitors are there; and it's already seen rewards from its relationships with other online retailers.

Nike's revenue growth has slowed in recent quarters as the company has lost sporting goods retailers like The Sports Authority, shed market share to Adidas, and seen a stronger dollar pressure sales abroad.

It's also set a bold goal of reaching $50 billion in revenue by fiscal 2020, a nearly 50% increase from $34.4 billion in the just-reported fiscal 2017. In order to reach that goal, Nike will have to grow revenue by more than 13% a year, a challenge for a brand that's seen sales growth in just the mid-single digits recently.

It's unclear what the Amazon partnership will mean for Nike's sales, but a Goldman Sachs analyst estimated the Swoosh could reap as much as $500 million in annual revenue from the platform, or growth of more than 1%.

Parker also said the company is experimenting with selling through Instagram, a sign that it's embracing e-commerce more than ever.

Management stressed that the pilot would be small for now while Nike examines the initial data and considers its future. But Amazon's e-commerce leadership and its rapid growth could be a huge opportunity for Nike. Expect the sports leader to ramp up online selling on Amazon and on other outlets as well.