Daniel Miller, Matthew DiLallo, Steve Symington, Timothy Green, and Todd Campbell
(TMFTwoCoins)
Author Bio
As a Motley Fool Industrial Specialist, I use my marketing and business background in the automotive industry to evaluate major automakers and other large industrial corporations. Follow me on twitter for tweets about stocks, cars, sports, and anything I find amusing. Follow @DanielMillerTMF

The only thing that gives me pleasure is to see my dividend coming in.
-- John D. Rockefeller

Rockefeller knew a little something about business and dividends are indeed an excellent way for investors to generate quarterly income. Companies that pay out dividends over a long-period of time or, better yet, consistently raise their dividends over time, often provide a good clue to the underlying strength of their business. Here are five of our analysts' favorite dividend stocks heading into December.

Matt DiLallo: Energy has been an awful sector for income investors this year after low oil prices caused a number of dividend reductions or suspensions. That said, while low oil prices are wreaking havoc on producers' cash flows, they're having quite the opposite impact on refiners like Valero (NYSE:VLO), which has raised its dividend twice this year.

Valero is really cashing in on low crude prices because it is benefiting from both a lower feedstock cost as well as higher demand for gasoline. That's a powerful combination for refining margins, which for Valero are up 38% year over year when compared to the third quarter of last year. Those margins are fueling copious amounts of cash flow into its coffers, which Valero in turn is sending back to investors via stock buybacks and dividends.

The dividend in particular has been growing rapidly in recent years: 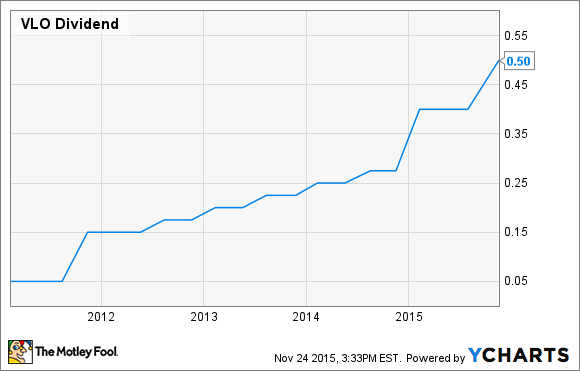 That's largely due to the fact that Valero has invested heavily to take full advantage of cheaper North American oil. The company is taking a two-fold approach, with investments geared both to increase its processing capacity for the different varieties of North American crude oil as well as investing in the logistics to bring greater quantities of this crude to its refiners. These investments will continue to pay big dividends even after crude prices rebound, because North American crude would still be cheaper than imported crude because of lower transportation costs.

Valero is cashing in on cheap crude oil right now, which is fueling a growing dividend at a time when a lot of other energy dividends have simply run out of gas.

Daniel Miler: United Technologies Corporation (NYSE:RTX) has always been on my dividend watchlist but with the recent sale of its Sikorsky helicopter business to Lockheed Martin Corp., for a price tag of $9 billion, the company's future seems even brighter.

UTC's sale of its Sikorsky business does a number of positive things, in my opinion. First, UTC plans to use $6 billion in net proceeds from the sale to accelerate its share repurchase program, which will deliver value to shareholders. Second, ex-Sikorsky, the company will reduce its military aerospace presence, and that will enable higher organic growth, better operating margins, and cash flow generation for its overall business.

Another interesting development that is coming to fruition after 20 years and $10 billion of development is Pratt & Whitney's -- a subsidiary of UTC -- accelerated production of its Geared Turbofan engine, which has already secured more than 6,000 orders. Investors should note that as this ramp-up of production takes place, its Geared Turbofan will actually record negative margin at delivery but will become the future bloodline of high-margin aftermarket services; remember that more than 40% of UTC's revenue is generated through high-margin and recurring aftermarket services.

UTC's long-term future looks promising ex-Sikorsky, and let's not forget that it has paid cash dividends on its common stock every single year since 1936. 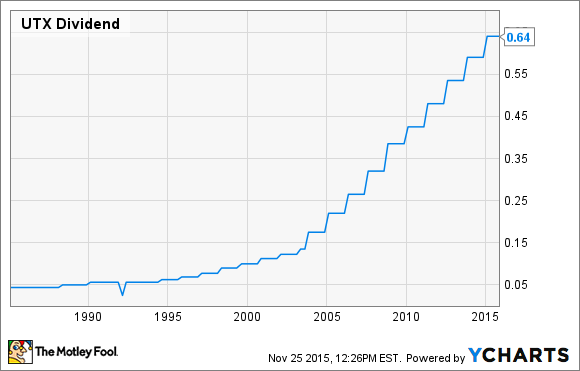 Investors can sit and collect a dividend of $0.64 per share for a yield of roughly 2.6% while UTC's future growth story plays out.

Todd Campbell: Gilead Sciences (NASDAQ:GILD) surprised a lot of investors last February when it became one of the few biotech stocks to pay a dividend, and it might be about to surprise investors again.

Because Gilead Sciences' cash stockpile is hitting all-time highs, and the one-year anniversary of its dividend announcement is fast approaching, I think the company could announce a dividend hike soon.

Thanks to its top-selling, high-price hepatitis C drugs, the company's generating about $4 billion in quarterly operating cash, and that cash, coupled with money raised by a recent debt offering, means Gilead Sciences has over $25 billion in cash and marketable securities on its books.

That's more than double the cash stockpile it had when it first decided to pay a dividend last year, and that could mean Gilead Sciences is about to use some of its financial firepower to up its dividend payout from its current $0.43 quarterly pace.

Adding to conviction that a hike is coming is the fact that Gilead Sciences cash dividend payout ratio, a measure of the amount of free cash flow minus preferred dividends that's spent on common dividends, is 7.1%, and that rate is far south of competitor Amgen's 26.08% rate.

Given that demand for hepatitis C therapy isn't backing off, and the company appears to have plenty of room to boost its dividend payment next year, December could be the perfect time to pick up Gilead Sciences' shares.

Tim Green: Retailers, and particularly department stores, are certainly not the most popular group of stocks these days. But discount department store Kohl's (NYSE:KSS) stands out as a great dividend stock selling at a bargain price. Kohl's dividend yield has jumped to nearly 3.8% over the past few months, thanks to the stock falling by about 40% from its 52-week high.

After a difficult couple of years, Kohl's has returned to growth, posting positive comparable-store sales growth in each of the past four quarters. During the third quarter, while other department stores fell short of expectations, Kohl's posted comparable-store sales growth of 1%, while per-share adjusted earnings rose 7% year over year. The low end of Kohl's earnings guidance for the full year is $4.40 per share, putting the P/E ratio at about 11.

Kohl's currently pays out $1.80 per share in dividends annually, putting the payout ratio based on the company's guidance at about 41%. This leaves Kohl's plenty of room to grow the dividend going forward, even if earnings growth is muted. The last dividend increase, which took place at the beginning of 2015, increased the quarterly payout by about 15%.

With shares of Kohl's beaten down, the dividend yield is higher than it's ever been. Kohl's only started paying a dividend in 2011, but it's quickly become one of the most attractive dividend stocks in retail.

Steve Symington: Even with shares of NVIDIA Corporation (NASDAQ:NVDA) up more than 50% so far in 2015 as of this writing, I think long-term investors would still be wise to pick up shares of the dividend-paying graphics chip specialist in December.

While competitors struggle to find growth as the the PC market stagnates, NVIDIA continues to thrive as revenue from its core discrete GPU business climbed 16% year over year last quarter to $1.11 billion, including an incredible 44% year-over-year increase in gaming GPU revenue to $761 million. On the other hand, revenue from NVIDIA's Tegra mobile superchips declined 23% year over year, albeit primarily due to the end-of-life of OEM smartphones and tablets as NVIDIA focused on more promising segments. Automotive revenue, for example, skyrocketed 52% to $79 million, but it still enjoys a long runway for growth as the market for GPU-enabled antonymous vehicles remains in its early stages.

In the meantime, NVIDIA just increased its quarterly dividend by 18% to $0.115 per share, equating to a healthy annual yield of 1.5% at current prices. In addition to the potential for further share price appreciation, next fiscal year, NVIDIA intends to return approximately $1 billion to shareholders through quarterly dividends and repurchases. NVIDIA has the funds to do so, generating free cash flow of $239 million last quarter -- up nearly 36% year over year -- and ending the period with net cash on its balance sheet of over $3.3 billion.

As NVIDIA continues to execute on its key growth opportunities, I see no reason the stock won't also continue to reward patient investors from here.