How do I love thee? Let me count the ways...

Elizabeth Barrett Browning wrote these words for her husband, poet Robert Browning. But this opening from her famous poem could have been penned by an (eloquent) investor about dividend stocks.

Indeed, there are several great reasons for investors to favor stocks that pay dividends. One big one is that companies need cold, hard cash to pay dividends, so investors at least know the company has this cash available.

In fact, there have been a good number of studies showing that dividend-paying stocks in general outperform nonpayers over the long term.

Here's a look at one such study: 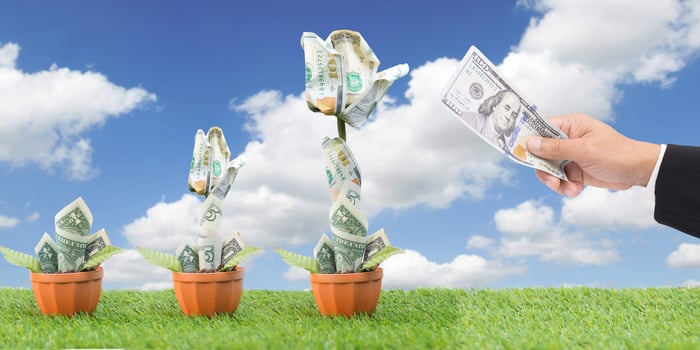 A key finding from Ned Davis Research is that within the broad category of dividend-paying stocks, the top performers tend to be "dividend growers" and "dividend initiators" -- the stocks of companies that raised their dividends and those that began paying a dividend, respectively, over the time period being studied.

This news likely doesn't come as a surprise to most investors, as it seems like common sense. However, what might be eye-opening to some folks is the magnitude of the advantage enjoyed by stocks that fall into these two categories, along with the way dividend stocks in general outperform nonpayers.

Using the above percentages, here's what $10,000 invested in a theoretical average stock within each dividend-related category would be worth at the end of a 30-year period, assuming dividends are reinvested:

An example of a top dividend grower

American Water Works (NYSE:AWK) is the largest publicly traded water and wastewater utility in the United States. Its stock is a top choice for investors who are looking for a lower-risk stock that they can buy and hold for the long term -- even forever.

American Water stock has returned 471% since the company went public just over 10 years ago -- nearly three times the S&P 500's 165% return. The company has raised its dividend each year since its initial public offering, so it's a textbook example of a dividend grower. 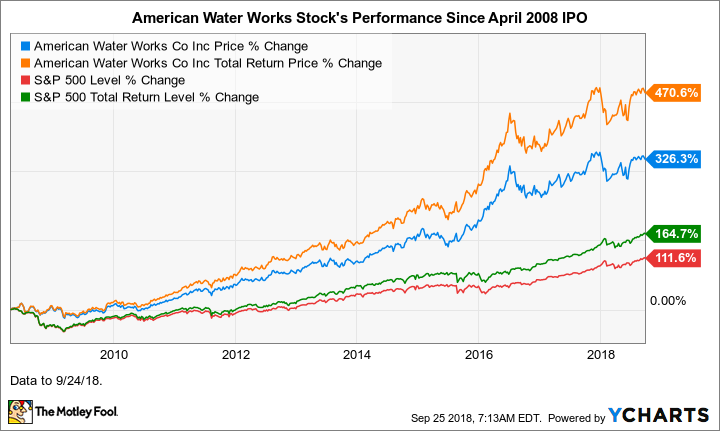 American Water is included in this discussion primarily to show how important dividends have been to the company's total return (stock price appreciation plus dividends). Though the dividend is relatively modest -- the current yield is 2.07% -- it has accounted for about 30%, or 134 percentage points, of the company's total return of nearly 471%. Investors who plunked down $10,000 on American Water stock at its IPO have seen their investment expand to $57,050, assuming they reinvested dividends. If American Water never paid a dividend, investors would now be sitting on "just" $42,623. (Also included in the above chart is data that shows how much dividends have boosted the S&P 500's return.)

An example of a top dividend initiator

Shares of graphics chip specialist NVIDIA (NASDAQ:NVDA) have returned a mind-boggling 1,060% over the three-year period through Sept. 24, versus the broader market's 60.7% return. The 10-year picture below is even prettier. 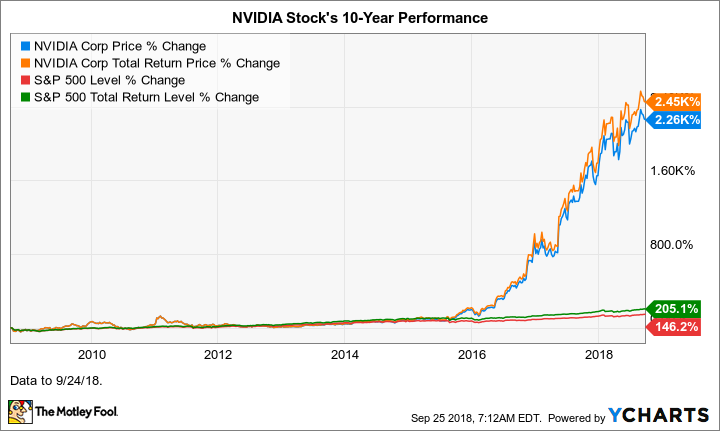 NVIDIA is best described as a growth stock, as it uses most of its cash to grow its business, rather than to pay a dividend. That said, in late 2012, it began paying a very modest regular quarterly dividend, currently yielding 0.23%. So it falls into Ned Davis' category of dividend initiators, which is why it's included in this discussion.

The dividend hasn't added much to the company's total return. But in the scheme of NVIDIA's history as a public entity (since January 1999), it wasn't that long after the company began paying a regular quarterly dividend in late 2012 that its stock started its powerful blastoff (about mid-2015). It's possible this might be more than just coincidence -- and it certainly supports Ned Davis' findings -- though one company is far from a statistically significant sample size.

Dividend-paying stocks in general have been shown to significantly outperform nonpayers over the long term. Investors might want to focus on the stocks of companies that have a good track record of raising their dividends and those that have fairly recently started paying dividends, as some research suggests these types of stocks are the sweet spots in the dividend-paying universe.