Please ensure Javascript is enabled for purposes of website accessibility
Log In Help Join The Motley Fool
Free Article Join Over 1 Million Premium Members And Get More In-Depth Stock Guidance and Research
By Rich Smith - Updated May 5, 2019 at 12:09PM

Pentagon ponies up to develop an "on demand" satellite launch capability.

But you know what they say: If at first you don't succeed, hire DARPA to try again. 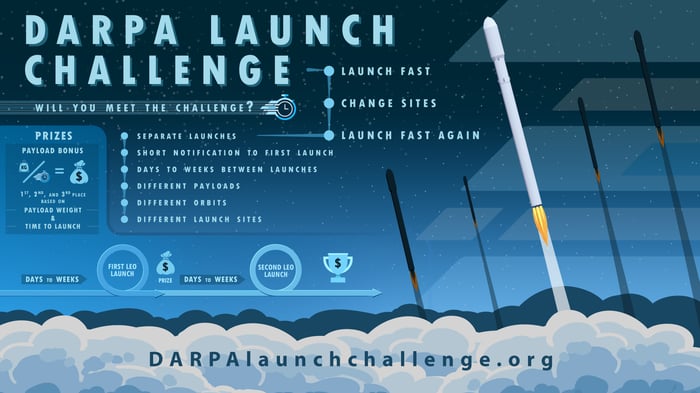 And DARPA -- the Defense Advanced Research Projects Agency -- is trying again. Earlier this month, the Pentagon's mad scientists division announced a competition it's calling the "DARPA Launch Challenge". A select group of three privately owned space companies will attempt to demonstrate that they have what it takes to put a small payload in space on very short notice, and at a very cheap price -- as low as $2 million per mission. DARPA says its Launch Challenge aims to develop a capability for "on-demand, flexible, and responsive launch of small payloads" for the U.S. military.

How flexible does DARPA expect its contractors to be?

"Today, most military and government launches are ... planned years in advance and require large, fixed infrastructure," says Todd Master, the Launch Challenge program manager. But DARPA wants "to move to a more risk-accepting philosophy and a much faster pace." Thus, in the Launch Challenge competition, participants "will receive notice of the first launch site [only] a few weeks prior to launch and exact details on the payload and intended orbit just days before launch."

And it only gets harder from there. Assuming a participant launches its first payload successfully, it'll be asked to gear up again and launch a second time, from a different site, with a different payload, and aim for a different orbit just a few "days or weeks" later.

And, of course, they'll need to pinch pennies as well. Each participant receives $400,000 to start with, then $2 million more for a successful first launch, and $8 million, $9 million, or $10 million as a final payout upon successful second launch. (For comparison, some ULA launches in the U.S. cost as much as $350 million -- albeit with larger payloads.) The final amount will be determined by the size of the payload they put in orbit, how quickly they get it there, and how accurately they perform the mission.

So who will vie for these prizes? Three companies.

Probably the highest profile of the three competitors by virtue of its name recognition and association with tech mogul Sir Richard Branson, Virgin Orbit will compete in the DARPA Launch Challenge through its subsidiary VOX Space -- set up in late 2017 specifically to win Defense Department space contracts for Virgin.

Like its sister company Virgin Galactic, Virgin Orbit is taking a hybrid approach to space launch, planning to fly an airplane to 35,000 feet, then launch rockets from there. The company will use a modified Boeing 747 mothership to fling its payloads of between 300 kilograms and 500 kilograms into orbit aboard 21-foot-long "LauncherOne" rockets. Because each "launch" begins on a runway, Virgin Orbit should theoretically be able to deploy satellites from any location with an airport.

Based out of Tuscon, Ariz., Vector Launch -- still known as "Vector Space Systems" when we first profiled it here -- was founded by SpaceX veteran Jim Cantrell in 2016. Like VOX, Vector has not yet launched a rocket that's reached orbit, although it has conducted multiple test launches of its 55-foot tall Vector-R "rapid" launch vehicle designed to launch 60-kilogram payloads to low earth orbit.

Vector touts its ability to drive its mobile rocket launcher to essentially any launch site a customer might wish and launch the Vector-R from it. In late 2017, for example, the company conducted a test launch from "Spaceport Camden" -- little more than a concrete slab in the middle of a forest.

We know less about this contest's third participant. DARPA describes it only as the "stealth team," although SpaceNews.com quotes industry sources suggesting that it's actually Astra Space, a 15-year-old Californian space start-up formerly known as "Ventions LLC."

Astra (assuming we're talking about Astra here) was founded by veterans of Orbital Sciences, SpaceX, and the Delta IV rocket program. It conducted a pair of launch attempts in July and November of last year, both of which are reported to have failed. Despite its lack of success in launching rockets (at least so far), Astra is a favorite of the U.S. government, having won some two dozen contracts worth more than $20 million over the past decade or so according to Parabolicarc.com, from clients ranging from NASA to the U.S. Air Force, U.S. Army, the Missile Defense Agency, and DARPA itself.

What happens next ... and what it means for investors

Sometime in early 2020, these three competitors can expect to receive notice that they're expected to launch -- and the race will be on. Success will mean several million dollars of DARPA funding with which to continue developing rockets, and potentially new follow-on contracts with the Pentagon. Air Force Space Command leader Gen. Jay Raymond has already said he's "extremely interested" in the results of the competition.

It could also set the winners up for a future IPO.

So far, Virgin Galactic is on record as planning to IPO its business "over a bit of time."

Likewise, Vector CEO Jim Cantrell has said his "goal" is "to make an initial public offering of Vector," possibly as early as 2021.

As for the third company, well, we don't even know for certain who that is, much less its IPO plans -- but even so, two out of three ain't bad. With any luck, investors will soon get a chance to invest in at least one or two of these companies.