No one sells more goods and services to the government than Lockheed Martin (NYSE:LMT) and Boeing (NYSE:BA). These two aerospace giants are the Nos. 1 and 2 biggest contractors to the federal government, respectively -- and to the Pentagon and NASA -- according to a 2016 report by the U.S. General Services Administration (GSA). And yet, when it comes to space contracting, these two behemoths now have a new rival. 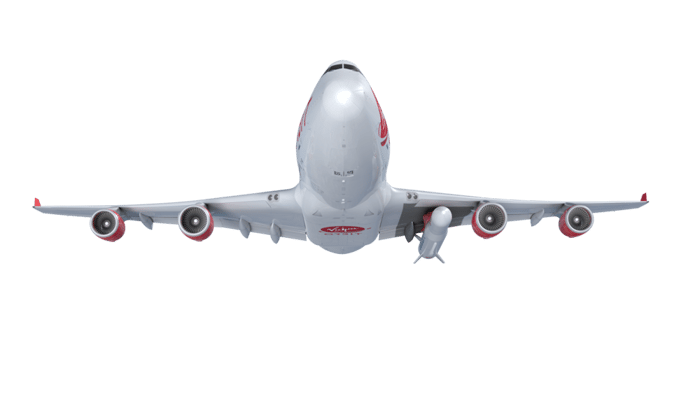 Virgin? You mean that airline run by the guy with the funny beard?

Yes, that's the one. The guy's name is Sir Richard Branson, and to date, he's founded some five dozen various "Virgin" companies. Most relevantly, in addition to Virgin Airlines (which he sold to Alaska Air last year, by the way), Branson has set up space tourism company Virgin Galactic, and also its recently separated-out subsidiary Virgin Orbit, which aims to deploy satellites by using airplanes to fire rockets into orbit. It's this latter subsidiary that I want to talk about here.

Last month, Virgin Orbit announced that the U.S. Department of Defense (DoD) has contracted with Virgin Orbit to run a "Space Test Program" for it. Virgin will fly a specially modified Boeing 747 dubbed "Cosmic Girl" to 35,000 feet, and there fire off disposable "LauncherOne" rockets to carry "technology demonstration satellites" into orbit. Flights are to begin sometime in 2019 under the aegis of the DoD's Defense Innovation Unit Experimental department (DIUx).

DIUx can best be thought of as a venture capital arm of the Pentagon. Tasked with solving a specific problem, DIUx enters into "pilot contracts for commercial innovation" with private companies -- and it has a particular focus on signing up "nontraditional or small businesses" like Virgin (as opposed to traditional megadefense contractors like Lockheed and Boeing). Companies that come up with workable solutions can then "easily enter into follow-on contracts" with the Pentagon for production of their solutions.

Seeking to take advantage of this program, Virgin is setting up a dedicated subsidiary to work with DIUx and other DoD departments on this and other military work. The new Virgin subsidiary will be called VOX Space (presumably short for Virgin Orbit eXperimental). Operating out of California, VOX Space already has its own mission statement: to "provide responsive, affordable launches to the national security community of the USA & its allies."

And now it has a Pentagon contract, too.

What does it mean to Lockheed and Boeing?

Through sales to the Pentagon, NASA, and other government agencies, Lockheed Martin racked up $43.4 billion in government contracts last year, according to GSA data (Boeing ran a distant second at $26.5 billion in government contracts). Although we don't know exactly how large the DIUx contract with VOX Space is, when compared to these sums, it's not likely that VOX Space poses any immediate danger to traditional defense contractor hegemony within the Beltway. The fact that we haven't heard any specific dollar figure attached to the Space Test Program with DIUx further suggests that the size of the initial pilot contract is not material.

That said, Branson's Virgin companies have proven themselves to be aggressive and successful competitors to more established corporations. Taken in conjunction with the rise of multiple other small rocket and small satellite companies, one way to view VOX Space's arrival on the new-space scene would be as "just one more" challenge that Lockheed and Boeing must overcome.

That being said, the list of those challenges -- and challengers -- is getting pretty long. If Boeing and Lockheed don't watch out, they might just find their military space businesses disrupted from below.