From its first tweet announcing takeoff to the last tweet confirming mission success, it took Virgin Galactic just 30 tweets, and 45 minutes, to go from Earth to space and back again.

When it did this, Virgin Galactic -- Sir Richard Branson's pioneering air-launched rocket company -- became the first U.S.-based space company to carry humans to space since the end of the Space Shuttle program seven years ago. After piggybacking on its WhiteKnightTwo (WK2) mothership to an altitude of eight miles, SpaceShipTwo (SS2) detached and ignited its rocket engine, ultimately topping out at 51.4 miles high. SS2 fell short of crossing the 62-miles-up Karman line, but reached the more lenient U.S. Air Force definition of "space," which counts anything 50 miles above the Earth's surface or higher.

In so doing, Virgin Galactic proved: It's now got a spaceship capable of carrying paying tourists to space -- at $250,000 a head. 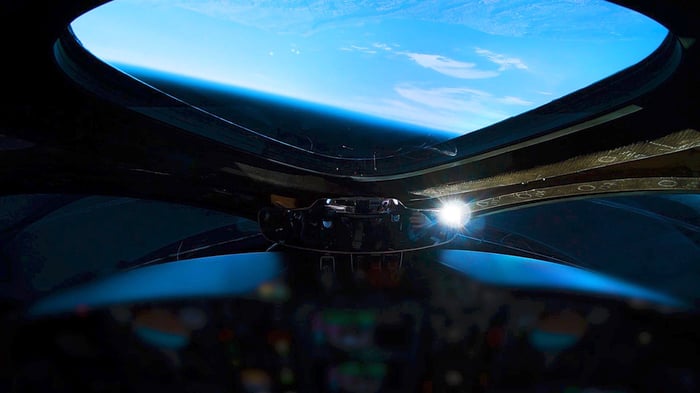 With $250,000 and a little patience, you, too, could view Earth from an orbiting SpaceShipTwo in just a few months. Image source: Virgin Galactic.

Virgin Galactic noted that this month's mission marked SS2's "first revenue-generating flight," because the test vehicle carried four payloads on-board for NASA. The amount of revenue recorded must have been small, though, because Virgin didn't bother to mention how much it earned. Thus the great prize for Virgin Galactic -- paying customers -- still remains to be won.

With seating for eight -- two crew, and six paying passengers -- and a $250,000 ticket price, SS2 should be capable of generating $1.5 million per flight once commercial space tourism flights begin. And such flights could begin sooner than you think.

Commenting on this month's flight, Virgin founder Richard Branson told CNBC he expects to run at least three more test flights before commercial operations begin. Branson himself plans to go up on one of these test flights "some time in the middle of next year." And then, "quite soon after that the public will go up."

Taken as a whole, therefore, this appears to add up to a promise that commercial space tourism flights will begin sometime after June 2019.

Virgin Galactic has already built up a big backlog of ticket-holders to go on those flights. Some 700 people have prepaid the $250,000 cost of a ride on SS2. On one hand, that's a downside -- it means there's $175 million in revenue that Virgin Galactic still needs to earn by delivering its promised service, creating urgency to get the business up and running.

On the other hand, though, it's indicative of strong demand that so many customers had already signed up to fly on SS2 before the suborbital spaceship had proven itself capable of reaching space. According to Virgin, "all released seats have been sold" already. Now that the company has proven its spaceship capable of reaching space -- and returning safely -- it stands to reason that if the company decides to sell more tickets, it can probably do so at will.

Additional customers are lining up to fly on rival Blue Origin's New Shepard suborbital rocketship, which might also begin commercial operations next year.

What it means for Virgin Galactic

Virgin Galactic's ability to raise $175 million in prepaid ticket sales is thus a big benefit to the business. With so many would-be customers waving money at it, Virgin was able to take a moral stand earlier this year and decline a $1 billion investment the Kingdom of Saudi Arabia had wanted to make in the company, responding to events surrounding the murder of journalist Jamal Khashoggi.

When initially proposed, the Saudi investment was described as intended to help fund development and testing of SS2 (and also a planned orbital-class cargo rocket for sister company Virgin Orbit). Now it seems that advance ticket sales could make up that billion-dollar hole in Virgin's balance sheet, providing the company with all the money it needs to complete testing on its spaceship and prepare it for commercial operation.

That being said, sooner is obviously better than later. If Virgin Galactic can complete its test flights as planned and begin commercial operations by mid-year, not only might it never need to take Saudi money (and sell off a stake in the company), but Virgin Galactic could also beat Blue Origin in the race to establish the first commercial space tourism business in history, thus securing its status as both top dog and first mover in this nascent industry.