It's been nearly four years since Virgin Galactic -- on the cusp of creating a space tourism business -- suffered a fatal setback. An experimental SpaceShipTwo (SS2) air-launched passenger rocket crashed just two minutes after detaching from its WhiteKnightTwo (WK2) mother ship, costing the life of one of the SS2's two pilots.

That crash also arguably cost Northrop Grumman (NYSE:NOC), which had built SS2 for Virgin Galactic, its relationship with the space tourism company.

Within less than two years, though, Virgin Galactic was up and running again. It revealed a new and improved passenger rocket dubbed Virgin Spaceship Unity (VSS Unity), built by The Spaceship Company, another Virgin company. Virgin Galactic promised to take a methodical, step-by-step approach in returning to space, featuring "lots and lots of testing" before resuming any powered flights. 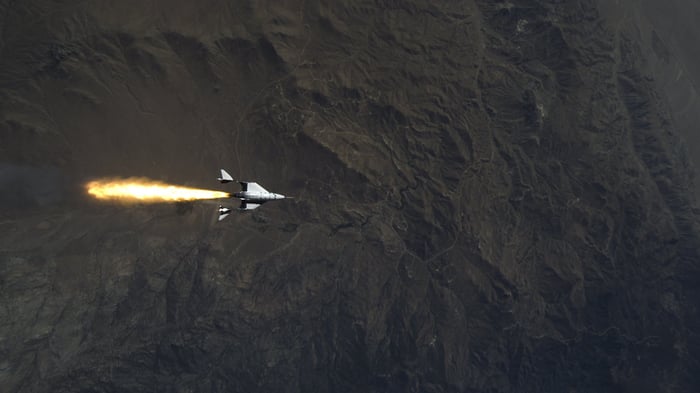 In April, Virgin Galactic conducted its first powered flight test of VSS Unity. Flying a mother ship dubbed Eve out of the Mojave Air and Space Port to an altitude of 46,500 feet, Virgin deployed VSS Unity for a 30-second powered flight that reached Mach 1.87. Unity reached an altitude of 84,271 feet before descending back to Earth.

Less than two months later, Eve took Unity up for a second spin -- a 31-second flight, hitting Mach 1.9 and reaching an altitude of 114,501 feet before gliding to another successful landing.

By all indications, Virgin Galactic's space tourism program is now back on track. In interviews after the successful test flights, Sir Richard Branson, Virgin CEO, has reiterated his promise to send paying passengers (at $250,000 each) to the edge of space in the very near future.

"We are now just months away from Virgin Galactic sending people into space and Virgin Orbit placing satellites around the Earth," Branson said in an interview with CNBC. And as further evidence that the company believes it's finally got the kinks worked out of Unity, Virgin Galactic says it is building two other spaceships of the same model, to better accommodate the more than 700 passengers who have already put down deposits on their tickets.

But first, Branson still wants to conduct "two or three" more test flights, with rocket burns as long as 63 seconds to ultimately boost Unity to a suborbital altitude of 264,000 feet. That should suffice to get Unity 50 miles above Earth's surface, or within spitting distance of the generally accepted definition of where "space" begins -- 62 miles up.

Once Virgin Galactic gets there, it will officially give birth to a new industry sector: space tourism. You might think this has little import for investors -- Virgin Galactic is privately held. And because space tourism doesn't currently exist as an industry, there aren't any competitors to bet on or against, either. (Well, yes, technically there is Blue Origin to compete with -- but it's not publicly traded, either).

That doesn't mean Virgin Galactic's success has no implications for investors, however. Scroll back up a few paragraphs, to that line about "Virgin Galactic sending people into space and Virgin Orbit placing satellites around the Earth" (emphasis added).

That's important, because the same technical know-how that Virgin Galactic is gaining in sending tourists to the edge of space, it's applying to a new business called Virgin Orbit, which plans to put satellites in space for NASA, for OneWeb, and for the U.S. military.

These are established markets with incumbent competitors like Boeing, Lockheed Martin, and especially Northrop Grumman -- new owner of Orbital ATK, which has its own launch-from-air rocketry business. Not to put too fine a point on it, but the closer Virgin Galactic gets to space, the greater the threat Virgin Orbit poses to the business models of legacy space-launch providers.

Even if none of these big three launch providers intends to build a space tourism business of its own, if you own shares in them, you need to keep an eye on Virgin Galactic.