Ever since NASA canceled its Space Shuttle program in 2011, America has depended on Russian rockets to provide access to the International Space Station. Buying tickets for its astronauts on Russian Soyuz spacecraft for as much as $82 million a seat, NASA in effect subsidized the Russian space program (Roscosmos) at the expense of our own.

And now we're doing it again. As The Wall Street Journal reported last month, NASA has contracted to buy three more Russian rocket rides for NASA astronauts over the next two years, and at a cost in excess of $200 million. For this, you can blame Boeing (NYSE:BA)... and SpaceX. 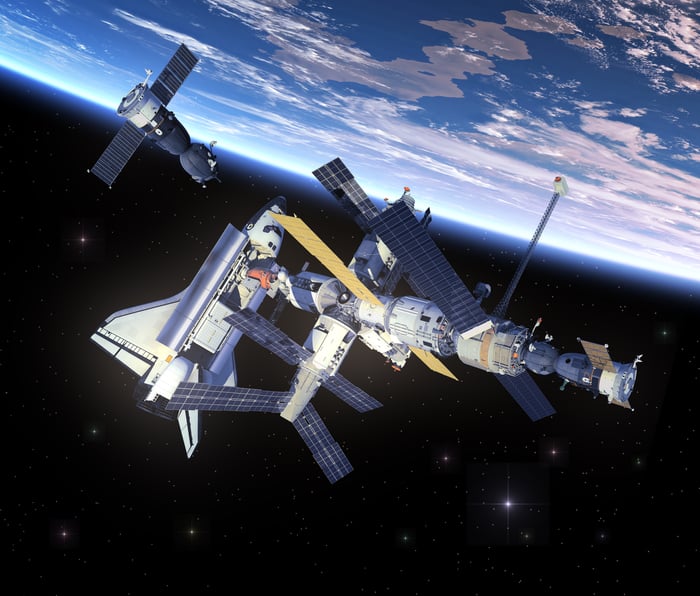 Destination: International Space Station -- but it will cost taxpayers a pretty penny to get there. Image source: Getty Images.

The specifics of this transaction are a bit convoluted, but bear with me and I'll straighten them out. In May 2016, Boeing won a $320 million court judgment (stemming from a dispute related to the bankrupt Sea Launch joint venture) against Russian space company RSC Energia. According to data from S&P Global Market Intelligence, RSC Energia was at the time majority-owned by The United Rocket and Space Corporation JSC, which was in the process of being merged into (and is now part of) the Russian-state-owned corporation Roscosmos (literally "Russian Space"). This makes RSC Energia itself essentially a subsidiary of Roscosmos -- Russia's version of NASA.

In settlement of its dispute with Boeing, Energia (i.e., Roscosmos) transferred to Boeing the right to fill two "seats" on Roscosmos Soyuz flights in 2017 and 2018, with the option to buy a further three seats for flights in 2019. (It's not entirely clear from the details of NASA's announcement whether exercising the option requires Boeing to pay any additional funds to Roscosmos, but this seems unlikely.)

In turn, Boeing sold its two Soyuz seats, plus the option for three more seats, to NASA in February 2017. The potential cost of all five seats, assuming the option was exercised, totaled $373.5 million -- about $74.7 million per seat.

Now, NASA is exercising the option, obligating it to pay the full contracted amount to Boeing. Upon Energia/Roscosmos providing the seats (i.e., filling them with astronauts and sending them to space), its obligation to Boeing will be satisfied in full. Thus in effect, by paying Boeing for the seats, NASA is paying off Roscosmos' debt.

It wasn't supposed to be this way. In 2014, NASA awarded Boeing (and privately held SpaceX) twin contracts to develop human-rated spacecraft capable of ferrying astronauts to the International Space Station. Boeing would receive $4.2 billion to launch up to six crewed missions to ISS aboard its new CST-100 space capsule. SpaceX would receive $2.6 billion to do the same with its new Crew Dragon spaceship.

As originally planned, both companies would conduct "at least one crewed flight test per company with at least one NASA astronaut aboard to verify the fully integrated rocket and spacecraft system can launch, maneuver in orbit, and dock to the space station" in 2017.

In case you haven't noticed, though, it's now 2018, and neither company has conducted so much as an uncrewed test flight -- much less put an astronaut in space. Delays in development at both Boeing and SpaceX have now pushed back SpaceX's first unmanned test flight to April 2018, and Boeing's to August 2018. SpaceX is hoping to conduct a manned mission in August; Boeing hopes to squeeze in its first test flight by November.

Hope for the best, pay for the worst

Worse, according to the Journal, "senior NASA officials increasingly are concerned the current 2018 timetable for switching to U.S. vehicles may prove too ambitious." I.e., after repeated delays, NASA has little confidence that either SpaceX or Boeing will launch capsules this year at all. That's why NASA is exercising its option to buy the additional Soyuz rocket rides from Roscosmos via Boeing -- at $75 million per seat.

The longer SpaceX and Boeing delay, the more money we'll be paying Russia to keep Americans in orbit.