It's not necessarily their intent, but when most investors begin their hunt for a new stock pick, it starts and ends with a large-cap name (a stock with a market capitalization of $10 billion to $200 billion). They're simply easier to find, to the point where investors often just stumble across one they like thanks to the financial media.

The new year, though, is a particularly appropriate time to make a point of seeking out small-cap stocks (those with $300 million to $2 billion in market cap) to add to your portfolio. As a group, these companies are relatively undervalued compared with their large-cap counterparts, and the stage may be set for a renewal of the market leadership that small caps are known for. 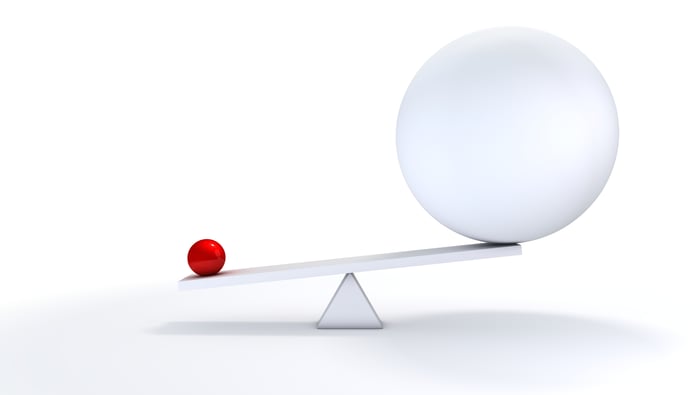 Last year was an exception to the norm

The year 2019 won't go down as a great one for small caps. Even with the fairly indiscriminate rally that lifted equities of all shapes and sizes beginning in October, the Vanguard S&P 600 Small Cap Index ETF (NYSEMKT:VIOO) only advanced 20% in 2019, versus the 28% gain logged by the SPDR S&P 500 ETF (NYSEMKT:SPY). The alternative small-cap proxy, the iShares Russell 2000 Index Fund (NYSEMKT:IWM), was lodged in between with a gain of 24% over the course of the past 12 months.

Just for the record, though, last year's large-cap leadership was an exception to the norm. For the bulk of the bull market that first materialized in 2003 (as well as the recovery from 2008's subprime mortgage meltdown), small-cap stocks like Netflix led the way with its incredible 5,000%+ run. (Netflix isn't a small-cap now, but it was in 2009.) In fact, small caps have historically outperformed large caps since such data began being collected. The most recent data from Ibbotson indicates the compound annual return for small stocks since 1926 is 11.8%, versus only 10% for large stocks. Over time, that small annual difference can really add up.

If they perform better, then what's the catch? Well, volatility is one drawback. The trading crowd that dabbles in smaller stocks is generally smaller in numbers, and they seem a little more trigger-happy when it comes to buying and selling. Case in point: Adverum Biotechnologies (NASDAQ:ADVM). It logged an impressive 265% gain in calendar 2019, traveling from a price of $3.15 per share to a year-end price of $11.52. But, it hit a high of $15.45 in July, only to fall to a multi-month low of $4.96 in October before hammering out a fourth-quarter rebound.

What's the other catch? For every Adverum, there's at least one Green Dot (NYSE:GDOT). The pre-paid debit card company's stock was all the rage in 2017 and 2018, but it gave back all of that two-year gain with last year's 70% slump. Time and technology caught up with the company, which is now struggling to compete with digital alternatives like Square and PayPal's Venmo, particularly now that Venmo has introduced a debit card of its own.

Even with the occasional clunker like Green Dot and fairly unpredictable short-term action though, as a group, smaller companies add a bit of firepower to a portfolio, often performing well when other classes may struggle.

Current weakness is an opportunity

It's the tendency to outperform, in conjunction with last year's weakness from small caps, that makes off-the-radar names so interesting here at the onset of 2020. Though not as cheap as they've ever been, they're still cheaper than they've been in a while compared to large-cap names.

The graphic below tells the tale. As of the end of 2019, the S&P 600 Small Cap Index was valued at 26.7 times its trailing earnings, which was well below its recent peak valuation near 35 as of the middle of 2016. That P/E is above last year's low point near 22, but still low compared to its recent measures, and still right around its long-term historical average. The S&P 500, on the other hand, is back to a trailing twelve-month P/E of 20.6, which is not only above its long-term average in the high teens, but close to its peak valuation around 22.0 seen in 2016 and 2017. That may be an absolute limit for the large-cap index, whereas the small-cap index has room to add valuation before investors grow too nervous to keep buying. 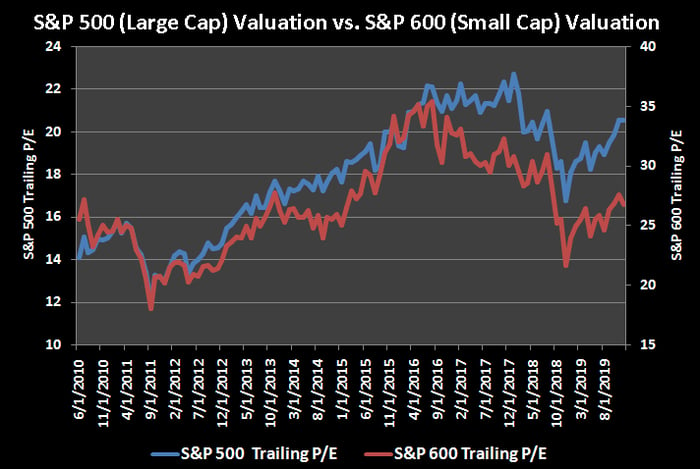 And we're seeing these good values among some very familiar, healthy small-cap names. Fellow Fool Sean Williams notes that Internet of Things company CalAmp (NASDAQ:CAMP) is only trading at 13 times its projected forward-year earnings, though he also notes Innovative Industrial Properties (NYSE:IIPR) is one of the few cannabis plays that's already profitable, and poised to see its bottom line swell this year. Mark Prvulovic has selected Cara Therapeutics (NASDAQ:CARA) as one of his top small-cap healthcare picks for 2020, and while it's not yet profitable, he makes a great case for the potential of its pruritus treatment called Korsuva. Any of their picks, though, would be a good place to start your search, though Dan Caplinger looks at a trio of screening tools that open up the entire universe of small-cap stocks.

Or, if you're not interested in a treasure hunt or keeping tabs on a smaller name, a simpler solution might be The Motley Fool Small Cap Growth ETF (NYSEMKT:MFMS). It maintains a portfolio of our 30 best small-cap growth ideas at any given time.

Don't read too much into the message. While small caps historically outperform large-cap stocks, that's not necessarily to suggest your portfolio should only consist of small companies. As always, a healthy balance of different types of stocks and asset categories is the key. And, as always, quality means more than a market cap. Scaling back or scaling up your exposure to small-cap stocks as a group is just a way to squeeze out a little more performance, provided the right backdrop like the one we see behind us now is in place.