Please ensure Javascript is enabled for purposes of website accessibility
Log In Help Join The Motley Fool
Free Article Join Over 1 Million Premium Members And Get More In-Depth Stock Guidance and Research
By Jason Hall - Aug 29, 2020 at 7:10AM

There's no getting around it: Tesla (TSLA 4.67%) has been an insanely good investment, generating enormous returns for investors willing to hold through all the noise and distractions, not to mention the potential implications of a global recession. Moreover, it's not just hype: Tesla is a great business that makes innovative and compelling cars that people love.

Its technological head start in battery tech and vertical integration in battery manufacturing have also proven big advantages, not to mention the potential for its renewable energy products, and the advent of autonomous-vehicle services that could deliver future profits. 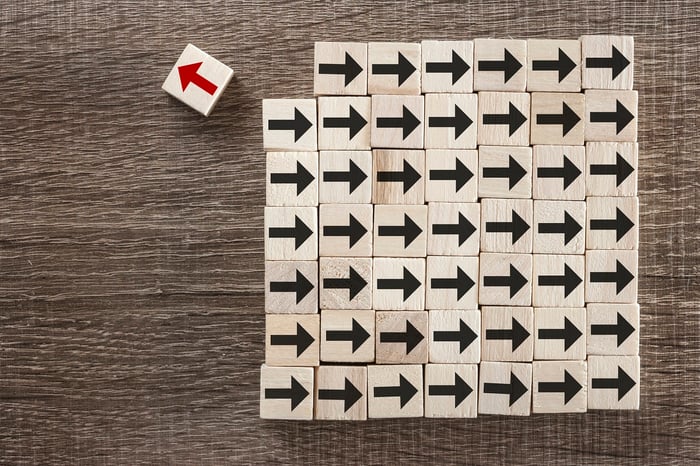 I'm not a Tesla bear. It's a wonderful company that has changed the world of autos for the better, and permanently. But I think there are better stocks to buy right now.

One of my favorites is Brookfield Renewable (BEP -0.40%) (BEPC -0.55%). It may not have provided Tesla-level returns over the past few years, but it's been a market-beating investment in its own right, and has some very real advantages making it the better investment. Here are two major reasons.

As much as Tesla has been a winning investment, there's no getting around it: A massive amount of the stock gains came from the stock's valuation increasing, not fundamental improvement in its results. 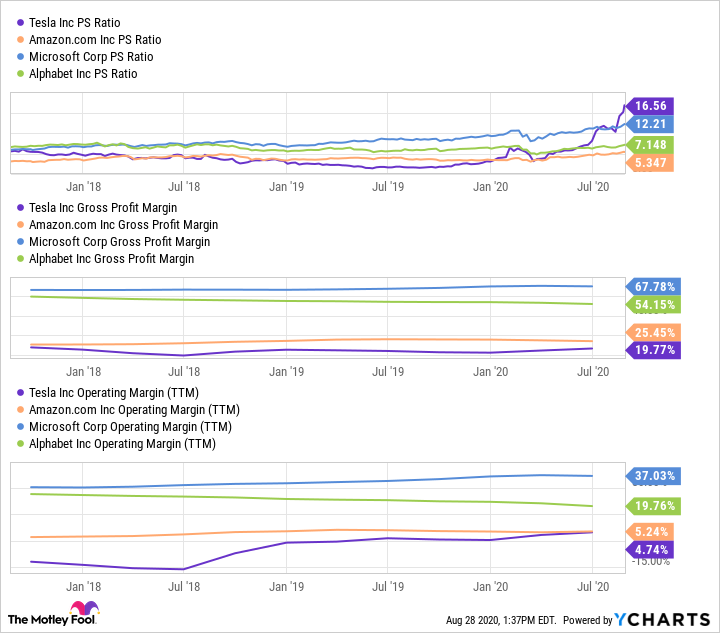 The big takeaway is that Tesla's returns have hinged on the market increasing how much it values the stock, not improvements in its underlying business results. Tesla has moved from trading at the lowest P/S multiple to -- by far -- the highest.

Here's the rub: Even when it brings higher-margin autonomous services into the mix in the future, Tesla will never be the sort of business that earns 50% or greater gross margins. Of the companies on this list, Amazon (AMZN 2.07%) is probably the most appropriate comparison: one with a business that's a blend of services and physical products. As the chart above shows, Tesla trades at an enormous premium, considering where its future margins are likely to fall. 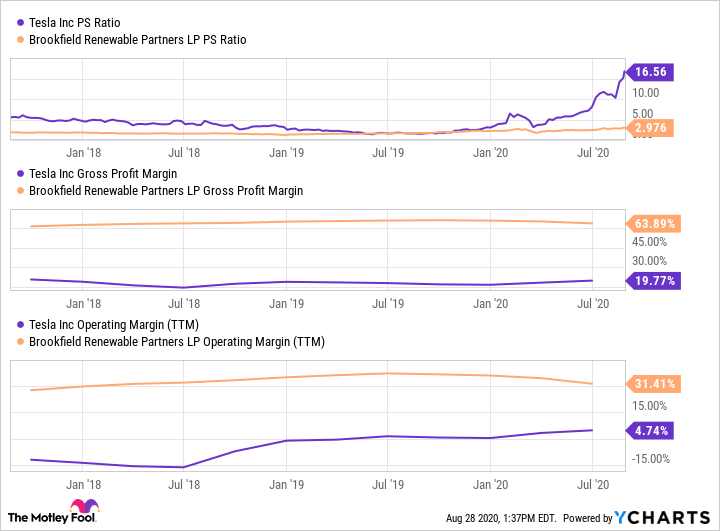 What does this tell us? In short, Brookfield Renewable generates pretty strong margins of its own, but hasn't seen its sales multiple change very much over the past several years. It's also made for a pretty great investment, more than doubling the SPDR S&P 500 ETF Trust (NYSEMKT: SPY) over the past three years: 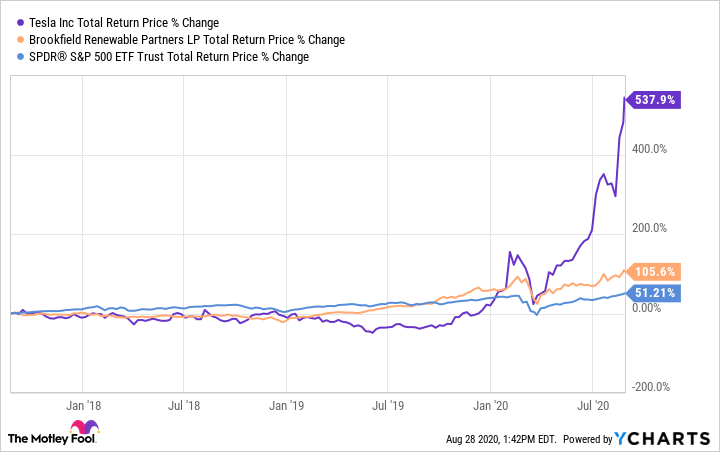 As much as Tesla has grown its business, investors paying a progressively higher valuation have driven the vast majority of returns. Brookfield Renewable has delivered incredible returns almost entirely from growing its business. One of those is a predictor for future returns; one is not.

And that sets up Brookfield Renewable to continue delivering wonderful returns for investors. Its management has an incredible track record of allocating capital, and the costs for renewables are falling. That's likely to allow Brookfield to acquire and develop more of the utility-scale electricity generating assets that deliver steady, recurring cash flow, which has made it a great investment over the past decade.

Sure, Tesla is likely to return to sales growth, and its market opportunity is enormous. But the downside risks at its current valuation are much greater than the prospects for market-beating returns.

2. Built for any economic environment

Tesla has proven more resilient to the coronavirus recession than expected, with sales falling only 5% in the second quarter while many other automakers saw sales fall 20% or more. There's also its energy storage business, which has enormous growth prospects, as utilities look to leverage the technology to replace older, more expensive methods of power generation from hydrocarbons.

But as time passes, the cyclical nature of these businesses will prove out. Utility-scale investments can ebb and flow from one year to the next, and as Tesla's electric vehicles become more mainstream, the global economy will cause its sales to fluctuate. This is one of the reasons that most automakers utilize third parties for many components, while Tesla has a high level of vertical integration. While that's a competitive advantage today, over time it could prove a detriment to remaining nimble in its very cyclical end markets.

Brookfield Renewable, on the other hand, sells electricity from wind, solar, and hydroelectric power facilities it owns. The demand for electricity is generally very consistent, and it sells that power under long-term contracts. The result is incredibly predictable and consistent cash flow that it can allocate to future growth, and return to investors via a sizable dividend.

This has already proven out, with Brookfield Renewables' predictable cash flow, compared to Tesla's big swings: 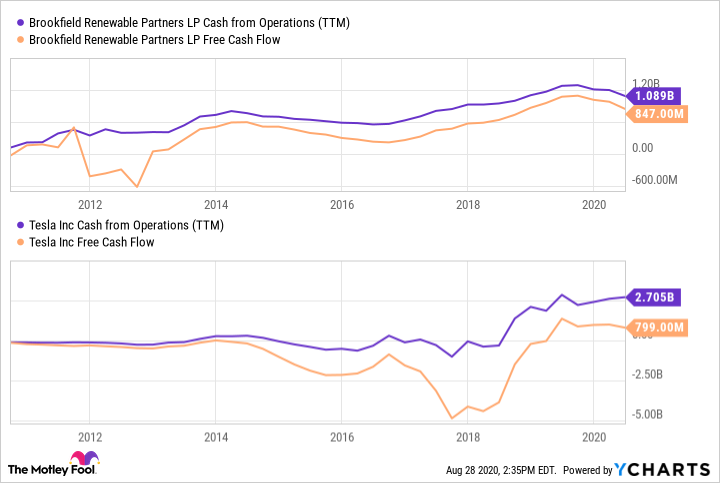 At recent prices, investors would earn more than 4% in yield, a sizable payout that delivers a predictable source of returns on its own. The track record of growing the payout is equally impressive, up over 300% over the past decade. Moreover, investors can expect payout growth that continues to be above-average, since Brookfield aims to increase the dividend about 8% every year.

Put it all together, and as Tesla grows larger, the bar will be raised for it to consistently outperform in a challenging, cyclical industry. Brookfield Renewable, on the other hand, is built to continue delivering no matter the economic environment, and could actually benefit from factors that harm Tesla.

Two great businesses, but only one great stock

I love Tesla the company. Elon Musk is a visionary who has done an amazing job taking his vision and delivering incredible products and life-changing returns for investors. I also think Tesla is likely to continue growing, and will be a leader in the future of transportation and battery technology for years to come. It's certainly worth a premium to any traditional automaker.

But I don't think it's a great stock for anyone looking to invest today. Even a wonderful business like Tesla isn't a great investment at any price.

Brookfield Renewable is also a wonderful business, with a very long record of rewarding investors who have bought and held on tight. The difference between the two is simple: Brookfield Renewable trades for a reasonable valuation, and the nature of its business and the enormous opportunity for renewables growth make it far easier for investors to predict a path to continued market-beating returns.