Big oil has seen better days. Shares of giant oil companies like ExxonMobil, BP, and Shell have lost more than 50% of their value over the last decade on average. Conditions have gotten so bad in the oil patch that BP plans to pivot away from the sector toward renewable energy. Because of that, big oil doesn't hold the investment appeal that it once did.

That's why investors should to start looking elsewhere if they want exposure to the energy sector. Three much better alternatives these days are pipeline giant Enterprise Products Partners (NYSE:EPD), and utilities Dominion Energy (NYSE:D) and NextEra Energy (NYSE:NEE). Here's why we think they have a much brighter future than big oil.

How about a big pipeline?

Reuben Gregg Brewer (Enterprise Products Partners): The biggest problem with big oil is that top- and bottom-line performance is tied to the volatile price of oil. But there's a way to sidestep that and still take advantage of the out-of-favor nature of the energy industry: Focus on the midstream sector. Midstream companies own and operate the pipelines, storage facilities, processing plants, and transportation assets that move oil around the world. The key, however, is that most players in the space get paid fees for the use of the assets. That means demand is more important than energy prices.

One of the biggest and most diversified midstream players in North America is Enterprise Products Partners. Roughly 85% (or more) of its gross margin is fee based. While the master limited partnership was impacted by the energy downturn, it is still covering the cost of its huge 11% distribution yield by a generous 1.6 times. The partnership has pulled back on its growth plans, but with such a large yield most of the return is going to come from the distribution anyway. 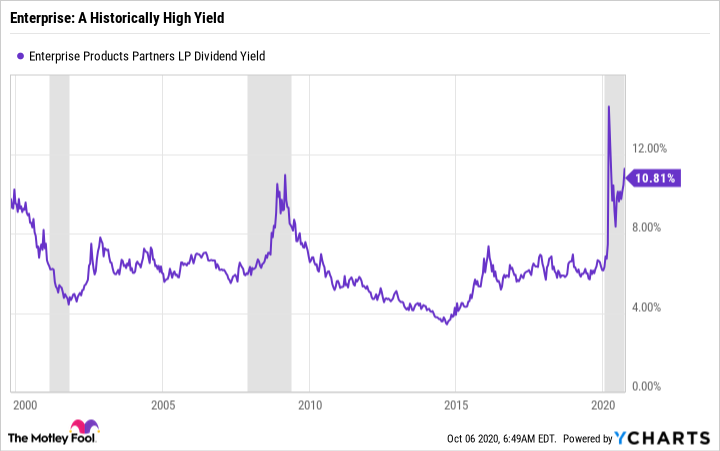 That said, it's important to note that Enterprise still sees a strong future for energy demand. This is hardly an investment in a dead industry, given that population growth will most likely mean a need for all types of energy. Yes, clean energy will be fast-growing, but counting oil out is probably premature at this point. Enterprise is a way to play in the energy patch while mostly sidestepping volatile oil prices.

Matt DiLallo (NextEra Energy): Big oil is a fraction of its former size. For example, at its peak in 2007, oil giant Exxon had a market capitalization of more than $500 billion. However, falling oil prices and a chilling long-term outlook for the oil market has slowly eroded its value. As a result, the oil giant's market cap was recently down to $137.9 billion.

One of the reasons the oil market has been under such pressure is that it's losing ground to renewable energy. That shift has benefited NextEra, which has been one of the leaders in the energy transition. Its renewable energy investment strategy has paid big dividends as the utility has generated a more than 500% total shareholder return over the last decade, more than double that of the S&P 500. That steady growth has pushed its market cap above Exxon's as it recently hit $138.6 billion.

Meanwhile, NextEra sees lots more growth ahead, powered by renewable energy. It recently increased its 2021 earnings forecast by $0.20 per share, which is on top of the 6% to 8% growth it initially expected and a $0.20 per share boost from a prior acquisition. It also extended its outlook by another year, anticipating that its earnings will expand by 6% to 8% per year through 2023 off that higher expected 2021 baseline level. That increases the probability that NextEra will deliver on its plan to expand its dividend by about 10% per year through 2022. Contrast that outlook with most big oil companies, which have reduced their dividends this year because of all the oil market turmoil. Because of that, investors should forget about big oil and consider this utility giant instead.

Daniel Foelber (Dominion Energy): Utility giant Dominion Energy made headlines in July when it announced the planned sale of its gas transmission and storage assets to Berkshire Hathaway. With the sale came the end of Dominion's involvement in the Atlantic Coast Pipeline, a project that proved too costly and uncertain for Dominion to develop.

Dominion has been increasing its share of state-regulated assets, which provide stable cash flow so that it can grow its dividend. The company spent the last 15 years transitioning away from coal toward natural gas and plans to spend the next 15 years moving further away from coal, reducing natural gas, and slightly reducing nuclear, to make way for a portfolio that is one-third renewable. To do that, the company will need to grow its renewable generation capacity at a compound annual growth rate (CAGR) of 15.4%.

Dominion's new direction will come at a cost to shareholders. Starting in the fourth quarter of this year, Dominion will pay a $0.63 per share dividend instead of $0.94. At Dominion's current share price of $81, the new yield would be around 3.1%, which is respectable. After rebasing its dividend, Dominion plans to increase dividends per share at 6% per year, and earnings per share at 6.5% per year from estimated 2021 levels.

Dominion's push toward more state-regulated assets, many of which will be in the form of renewables, seems to be the best way to ensure long-term profitability and earnings growth. Considering Dominion's dividend comprised over 80% of its earnings, the dividend cut seems to be the best way for the company to still provide an attractive income investment while also retaining more earnings to fund its growth plan. Compared to big oil stocks that rely on volatile commodity prices, Dominion's stable business model and new direction could be a better long-term energy investment.