Please ensure Javascript is enabled for purposes of website accessibility
Free Article Join Over 1 Million Premium Members And Get More In-Depth Stock Guidance and Research
By Harsh Chauhan - Dec 20, 2020 at 8:30AM

Booming demand for gaming hardware is a tailwind for this hot growth stock.

There's no doubt that NVIDIA ( NVDA 0.40% ) has been a top growth stock in 2020. It has sent investors laughing all the way to the bank on the back of a rapid increase in demand for its graphics cards that are used in video gaming, data centers, and other products.

The sharp rise in NVIDIA's revenue and earnings has helped the stock more than double this year. The downside to that rapid appreciation is that NVIDIA stock is now richly valued, with a price-to-earnings (P/E) ratio of 85, double the company's five-year average of 47. It also trades at 22 times sales, way higher than the five-year average price-to-sales multiple of 12.2.

There are also concerns about the pace of NVIDIA's data center growth that may give investors second thoughts on whether this high-flying tech stock is still worth holding on to. 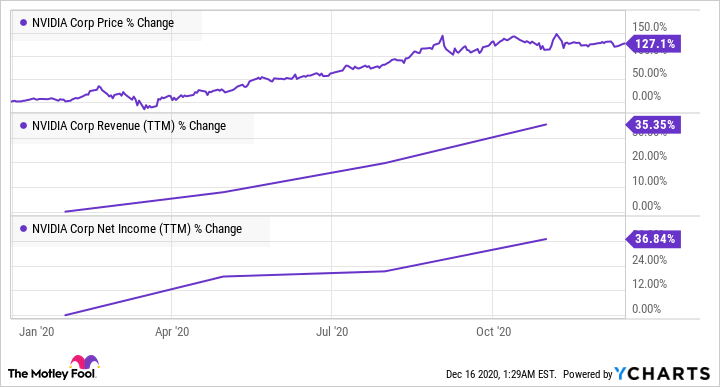 So, if you're one of the investors who are thinking of taking some money off the table because of NVIDIA's expensive valuation, Corsair Gaming ( CRSR -0.64% ) could turn out to be a solid alternative to invest in. Here's why.

Corsair Gaming makes video game peripherals and hardware. It made its stock market debut just a few months ago, and shares have more than doubled in a short time. That's not surprising given the pace at which the company is growing. Corsair's third-quarter revenue had shot up nearly 61% year over year to $457.1 million, thanks to strong demand for gaming components and gamer peripherals. 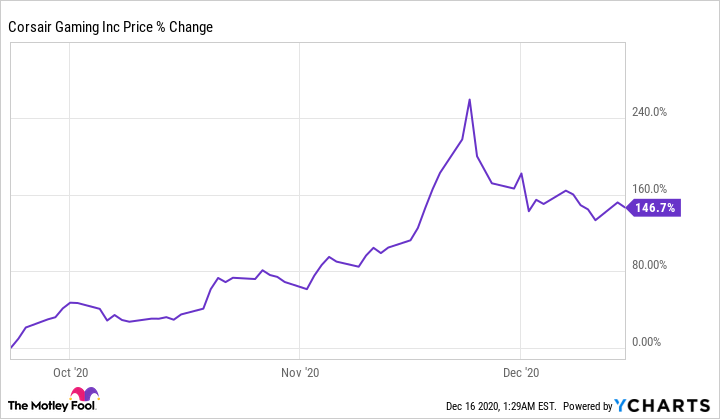 Corsair looks all set to sustain that terrific growth rate, as it recently upgraded its 2020 guidance. The company now expects revenue to grow between 50% and 52% this year to a range of $1.65 billion to $1.67 billion, along with a huge jump of 183% to 192% in the operating income. It was earlier anticipating $1.62 billion in revenue at the higher end of its guidance range.

Corsair management explained that the company is witnessing an uptick in demand for gaming products across all price points thanks to both new and existing customers. More specifically, Corsair customers are buying both video game streaming equipment and high-end gaming PCs (personal computers) because of newly introduced chips such as graphics cards. This is a trend that looks sustainable in the future because of a couple of reasons discussed below.

The demand for video game streaming equipment could keep getting better, as the game streaming market is expected to clock a compound annual growth rate (CAGR) of 9% through 2025, according to Mordor Intelligence. But don't be surprised to see the market growing at a faster pace thanks to the increasing popularity of esports and streaming platforms.

The esports market is expected to grow at 18% a year over the next five years as per third-party estimates. The prize pool of esports tournaments could jump to $3 billion in 2025, which could encourage more gamers to hone their skills and buy relevant gaming equipment to stay up to speed. As a result, Corsair's gamer and creator peripherals business, which supplied 35% of the total revenue last quarter and recorded year-over-year growth of 129%, seems set for better times ahead.

Another reason why Corsair seems set for better times ahead is because of the launch of a new generation of CPUs (central processing units) and graphics cards. Jon Peddie Research had reported earlier this year that the PC gaming hardware market could jump 10.3% in 2020 and add $3.6 billion in revenue because of the novel coronavirus pandemic.

Gaming enthusiasts were reportedly upgrading their systems to enjoy better gameplay. And now, the release of new high-end hardware from the likes of AMD and NVIDIA at aggressive price points could be a tailwind for Corsair's gaming components and systems business that accounts for the rest of its revenue. That's because a large number of gamers are reportedly using old graphics cards that would need an upgrade.

Corsair sells pre-built PCs and other components such as computer cases, RAM (random access memory), and cooling solutions, among others, through this business. The launch of new gaming hardware to tackle new, graphics-intensive games could lead to an increase in demand for Corsair's gaming components as users upgrade their systems.

However, new gaming titles may not be the only catalyst driving sales of Corsair's pre-built PCs and components. The likes of AMD and NVIDIA are reportedly witnessing a spike in demand from cryptocurrency miners for their latest graphics cards. For instance, an NVIDIA RTX 3080 is reportedly three to four times faster than its predecessor when it comes to mining. Not surprisingly, the demand from cryptocurrency miners for the new cards is said to be strong enough to cause a supply shortage.

Now, Corsair sells pre-built gaming PCs that are powered by NVIDIA's latest RTX 30 series cards, including the RTX 3080. In fact, Corsair's One i160 PC powered by the previous generation RTX 2080 Ti graphics card is considered to be among the top machines for mining cryptocurrency. It is priced at almost $3,400. And now, a Corsair pre-built PC equipped with the RTX 3080 is priced at a much more competitive point of $2,900. So, it won't be surprising to see cryptocurrency miners line-up for Corsair's gaming rigs that are rocking the latest graphics cards from the likes of NVIDIA.

The final reason to buy

In all, Corsair's momentum looks all set to continue because of favorable end-market conditions. And given its valuation, now may be a good time to buy this stock if you haven't already. Corsair stock trades at just 46 times trailing earnings and two times sales despite delivering terrific growth, which makes it way cheaper than NVIDIA.

A forward price-to-earnings (P/E) ratio of 26.7 indicates that the company's bottom-line growth is here to stay. Analyst estimates compiled by Yahoo! Finance also expect a huge jump in Corsair's earnings in the coming years, which it looks capable of achieving on the back of the video gaming market's growth. All of this makes Corsair Gaming an ideal bet for investors looking for a hot growth stock trading at a relatively reasonable valuation, instead of richly valued stocks like NVIDIA.

What Does the Global Shipping Crisis Mean for Corsair Gaming's Stock?