Advanced Micro Devices (NASDAQ:AMD) and NVIDIA (NASDAQ:NVDA) have set the market on fire in 2020. Both chipmakers' stocks have more than doubled year to date, despite the broad economic headwinds of the coronavirus pandemic.

But if you're thinking that these two hot stocks are done moving higher for the moment, you may find yourself pleasantly surprised. The return of a well-known catalyst -- cryptocurrency mining -- could be giving them a nice lift at the moment. 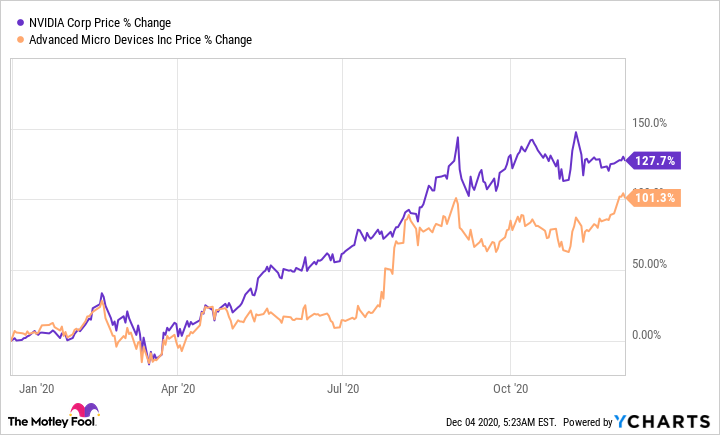 Cryptocurrency miners are snapping up AMD and NVIDIA GPUs

NVIDIA and AMD benefited from the cryptocurrency mining craze in a big way in 2017 and 2018, selling nearly $800 million worth of graphics cards to miners, according to third-party reports. But this was just one side of the story. That huge demand from cryptocurrency miners created a shortage of GPUs (graphics processing units), which led to a sharp increase in their prices.

A similar trend seems to be playing out after the recent releases of AMD and NVIDIA's latest-generation cards, which promise huge performance gains over their predecessors. The new GPUs are already hard to come by, and the shortages are anticipated to last well into 2021.

Wall Street sees heavy GPU purchases by cryptocurrency miners as one of the reasons for this shortage. According to RBC Capital Markets, NVIDIA reportedly sold $175 million worth of its RTX 30 series graphics cards to miners in its fiscal third quarter, which ended on Oct. 25. That's an impressive figure considering that it didn't start to launch the new GPUs until the second half of September.

If that's indeed the case, then it is not surprising to see why this is happening, as NVIDIA's new-generation GPUs are reportedly much faster at mining. On the other hand, there are rumors that AMD's latest RX 6000 series cards are also well-suited to the task, with the RX 6800 said to be substantially faster than NVIDIA's RTX 3090.

Given that the prices of cryptocurrencies such as bitcoin and Ethereum have rallied strongly of late, AMD and NVIDIA could continue to experience significant mining-related demand. Though this would be bad news for video gaming enthusiasts, the chipmakers are likely to laugh their way to the bank as the shortages give them pricing power.

NVIDIA's video gaming business accounted for 48% of its revenue last quarter, and sales in the segment grew by 37% year over year. AMD also clocked impressive Q3 growth of 31% year over year in its computing and graphics segment, which accounts for almost 60% of its total revenue. Based on current end-market conditions, both companies could sustain this momentum for a while.

But investors should note that demand from cryptocurrency miners would only add to the existing tailwinds that both companies enjoy. AMD, for instance, has witnessed a huge spike in semi-custom revenue thanks to the recent launches of new gaming consoles from Microsoft and Sony. Additionally, AMD has been taking away market share from Intel consistently in the CPU (central processing unit) space thanks to its superior offerings.

NVIDIA, on the other hand, is witnessing strong growth quarter after quarter in its data center business (which produces 40% of its revenue). That segment still has a lot of growth to offer thanks to the rising demand for workhorse hardware to support artificial intelligence applications and other high-performance computing tasks. The chipmaker is also looking to make a dent in the nascent but promising market for autonomous cars.

In the end, both NVIDIA and AMD have multiple tailwinds propelling their businesses, and these could send their share prices higher. The combination of heavy purchases by cryptocurrency miners and the already-heavy demand from the video gaming market makes both of these growth stocks worth holding on to, even after their solid runs upward in 2020.