These new GPUs may cause gamers to think twice before buying a new console.

NVIDIA's (NVDA -6.30%) gaming segment has posted strong sales results this year, but competition will heat up this fall. New gaming cards and game consoles will launch this holiday powered by custom processors from rival Advanced Micro Devices (AMD -2.19%). Yet NVIDIA may have the answer in the new Ampere RTX 30 gaming cards announced on Sept. 1.

What's under the hood of Ampere RTX

NVIDIA says the RTX 30 series delivers up to two times the performance over the previous Turing generation when used for ray tracing. NVIDIA originally introduced ray tracing with its Turing RTX cards in 2018, which rendered more accurate lighting and shadow effects in-game.

Overall, the new Ampere gaming chips pack an impressive 28 billion transistors, which is significantly higher than the 15.4 billion under the hood of Microsoft's (MSFT -0.92%) upcoming Xbox Series X. 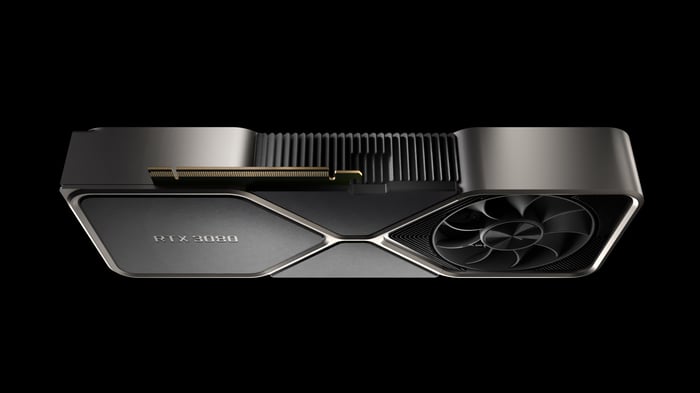 NVIDIA is delivering a much bigger leap in performance than it did with Turing over Pascal in 2018. In a press release, NVIDIA called these GPUs "the greatest-ever generational leap in GeForce history." The specs and prices of these new cards are clearly intended to put a competitive product out ahead of a busy holiday season when the new consoles launch.

At the top is the RTX 3090. It's powerful enough to run games at 60 frames per second at 8K resolution. As CEO Jensen Huang said, "This is insane." It's so fast that most gamers won't need that much graphics power, especially at the hefty price tag of $1,499.

With the 3090 meeting the highest of performance needs, that leaves plenty of room for NVIDIA to offer superior gaming performance at prices that will compete with Sony's (SONY -1.73%) PlayStation 5 and Microsoft's Xbox Series X this holiday.

The best part is that the 3080 delivers more speed but at a cheaper price point than the RTX 2080 Super, which retails for $729.

However, NVIDIA may have hit the sweet spot with the RTX 3070. It is less than half the price of NVIDIA's most powerful RTX card -- the 2080 Ti -- but NVIDIA says it is faster. 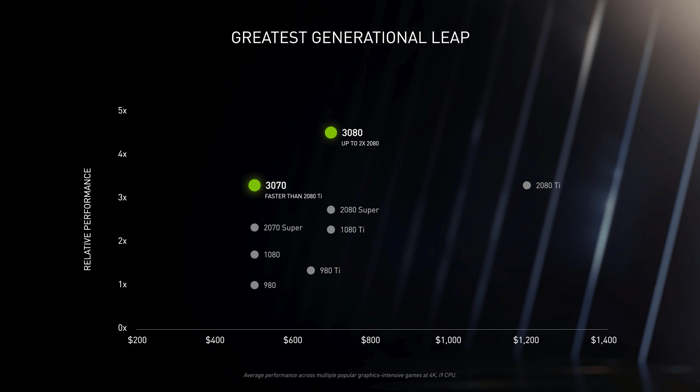 The 3070 will retail at a competitive price of $499 -- the same price that was just revealed for the Xbox Series X.

The new Ampere RTX 30 GPUs offer a genuine performance upgrade over Turing RTX and are exactly what NVIDIA needed to offer to maintain its lead in the discrete GPU market.

In the second quarter, NVIDIA expanded its lead over AMD in the add-in board market, reaching a market share of 78%, according to Jon Peddie Research. That is up from 69% in the first quarter and 68% in the year-ago quarter.

NVIDIA goes beyond graphics to appeal to gamers

NVIDIA not only packed a punch with the Ampere cards, it's going over the top to cater to those who like to play esports titles and stream their gameplay, with new software tools like NVIDIA Reflex and NVIDIA Broadcast.

NVIDIA Reflex will help esports enthusiasts be a little faster on the trigger in competitive shooters like Valorant. Reflex helps reduce latency, or the speed it takes for a mouse click to register on the screen during gameplay. Most NVIDIA users play esports games, so this will be right up their alley.

NVIDIA Broadcast uses artificial intelligence to paint a virtual background behind the streamer without the use of a physical green screen. Streaming continues to grow with millions trying it out every year, and this new feature will make it even easier for new streamers to get started.

Through the last quarter, less than a third of the total installed base of NVIDIA GeForce users had upgraded to an RTX GPU. The new Ampere GPUs may accelerate the upgrade cycle over the next year, especially with more games starting to come out taking advantage of ray-tracing technology.

AMD is expected to announce a new round of graphics processors for gaming later this year with the RDNA 2 GPUs. These cards will likely offer similar performance to what NVIDIA has with Ampere, but NVIDIA did what it needed to do with this release, which was to give PC gamers a compelling alternative to stick with their PC, as opposed to dropping $500 on a new console.

NVIDIA is doing more here than just offer upgraded graphics performance. With the new creative tools like Reflex and Broadcast, NVIDIA is trying to corner the market on PC gaming by offering all the tools needed, across hardware and software tools, to handle anything a gamer throws at their machine.

Investors gave NVIDIA a big thumbs up immediately following the announcement by sending the share price up 7%.