It would be easy to be discouraged. Despite a solid overall third quarter, NVIDIA (NASDAQ:NVDA) shares stumbled a bit following last week's release of its latest earnings report. Investors were particularly alarmed by the company's forecast for slowing data center revenue growth, which was NVIDIA's biggest business a quarter earlier. The stock has continued to sink -- albeit modestly -- in the meantime.

If a data center slowdown is your concern, don't be concerned. Too many investors have lost perspective on the data center matter, overlooking a key detail of NVIDIA's warning in the process. 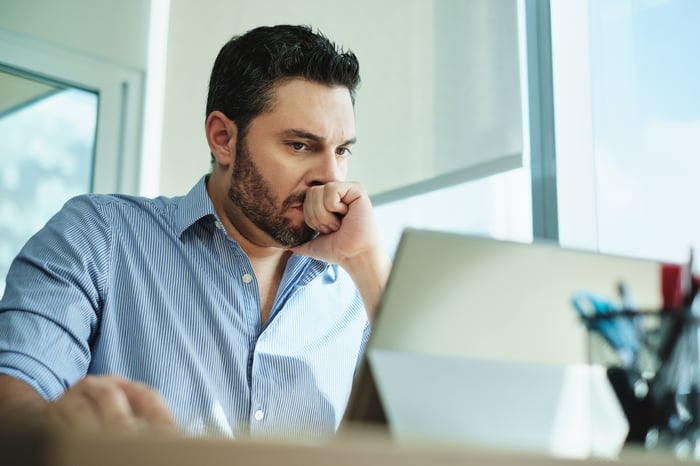 The data center explosion is over, for now

For the three-month stretch ending in October, NVIDIA turned revenue of $4.73 billion into a per-share operating profit of $2.91. The former was up 57% year over year, and the latter was higher to the tune of 63%. Both were driven considerably higher by the 162% improvement in sales of hardware to data centers.

Don't be too impressed. The company's acquisition of high-performance computing solutions and services provider Mellanox was completed in April. Its business is counted as data center revenue, and that revenue wasn't in the mix in the third quarter of 2019. The bar was set low. Still, Mellanox accounted for only 13% of last quarter's sales, and only about a third of Q3's data center revenue. Demand for NVIDIA's new data center architecture known as Ampere has also been quite strong.

It won't last -- at least according to NVIDIA. CFO Colette Kress bluntly commented during the conference call, "we expect data center to be down slightly [for the current quarter] versus Q3." She's probably right, too.

Largely omitted from the post-earnings call conversation, however, is the fact that Q3's data center business was strangely strong, and that Kress' caution only applied to the fourth quarter now underway. Data center hardware demand is expected to strengthen again in calendar 2021.

The graphic below puts things in perspective. Before this year, data centers weren't a huge business for NVIDIA. Most of its sales came from video gamers and computer manufacturers that wanted to put NVIDIA's tech inside their machines distributed to consumers. This began to change in the last quarter of the last calendar year (NVIDIA's fiscal 2020) when data center sales started to take off. For the first time ever, in Q2 data center revenue topped gaming sales. And gaming sales weren't too shabby during the second quarter. Video gaming revenue raced ahead of data center sales in the third quarter, but NVIDIA's data center business continued to grow. Now Kress says that growth streak is apt to be broken. 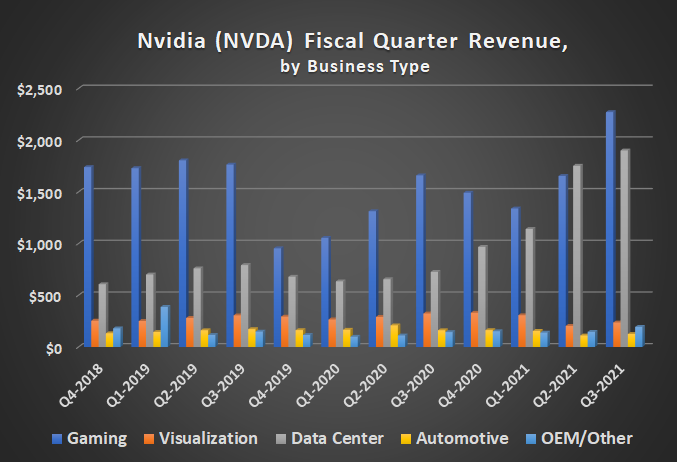 Now look again at the chart. Specifically, notice how the last couple of quarters are the outliers, raising the bar significantly -- and perhaps unfairly -- for future quarters' look-back comparisons.

There's a reason. Aside from the impact of the Mellanox acquisition, NVIDIA's Ampere architecture for data centers has been all the rage since it was released in May. It's particularly well suited for artificial intelligence applications, and some tech giants appear to have been waiting on such a solution, plowing in once it was made available. Microsoft (NASDAQ:MSFT) Vice President Mikhail Parakhin commented at the time how Microsoft's "Azure will enable training of dramatically bigger AI models using NVIDIA's new generation of [Ampere-based] A100 GPUs to push the state of the art on language, speech, vision, and multi-modality." It's a microcosm of why the big second and third quarters for NVIDIA's data center business are a tough act to follow.

They will be followed, however, with even more demand.

That's the word from technology market research outfit Gartner, anyway, which as of last month is calling for a 6.2% increase in worldwide data center infrastructure spending in 2021. Rival technology market research company IDC further indicated in August that annual spending on artificial intelligence architecture should double within four years, reaching $110 billion by 2024. The intersection of these two outlooks could disproportionally benefit NVIDIA. Clearly, the company has managed to grow this sliver of its business despite this year's 10% dip in data center infrastructure sales.

Sure, the company's fourth-quarter data center business is apt to slow down. It should slow down, however.

With or without logistics and sales hurdles presented by the resurgence of COVID-19 cases all across the world, most of the data center operators who wanted to upgrade their hardware did so shortly after the Ampere architecture hit the market. The pace of that demand growth wasn't sustainable, just as the benefit of the Mellanox acquisition won't be. Mellanox and NVIDIA's Ampere technology are still plenty marketable, though, particularly to companies doing artificial intelligence work.

Don't lose sight of the forest by examining each and every tree. NVIDIA is still the same strong company it was a month ago, and its stock is currently trading at a small discount.