Please ensure Javascript is enabled for purposes of website accessibility
Free Article Join Over 1 Million Premium Members And Get More In-Depth Stock Guidance and Research
By Keith Noonan - Jan 4, 2021 at 9:48AM

The century-old camera company was one of last year's most exciting and controversial stocks.

Shares of Eastman Kodak ( KODK -5.84% ) rose 75% across last year's trading, according to data from YCharts. The stock soared following indications that the company would be making a big push into the production of chemicals used in pharmaceutical manufacturing. 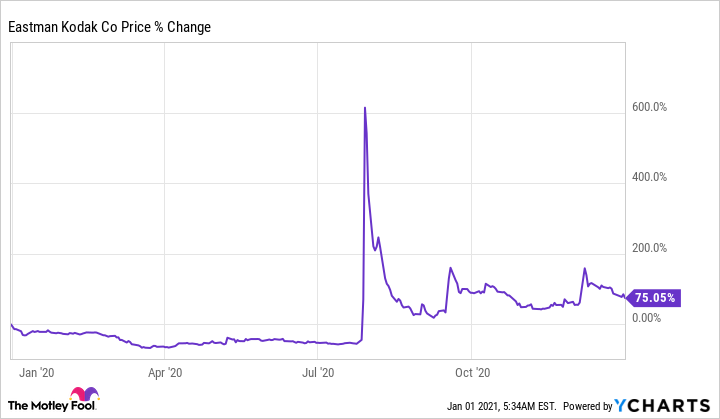 News hit in late July that Kodak had received approval for a $765 million loan from the U.S. International Development Finance Corporation (DFC). The loan was part of the Defense Production Act and was intended to jump-start the company's pivot to making chemicals used in the manufacturing of pharmaceuticals, including hydroxychloroquine -- a compound touted by the Trump administration and some doctors as a treatment for mitigating the effects of COVID-19. What followed was one of the most volatile and exciting stock market stories of 2020.

Kodak is best known for its camera and film businesses, but the company also operates a chemicals production segment. With its core film-based unit facing intense pressures from the rise of digital technologies, the business has struggled to find ways to grow over the last decade.

The $765 million loan to accelerate chemicals production was a potential game changer for Kodak. The company's stock soared roughly 3,000% following the announcement, and it closed out July up 879.8%, according to data from S&P Global Market Intelligence.

However, controversy and volatility followed, and the DFC and Kodak announced that there would be a pause on the process after the loan attracted scrutiny. The Securities and Exchange Commission (SEC) announced it would conduct a review of the potentially illegal insider trading among top Kodak executives leading up to the announcement of the loan. Democrats in the U.S. House of Representatives also announced that they would be launching an investigation.

Kodak gave up most of the gains it had notched shortly after the loan's announcement, but more twists and turns were on the way. The stock saw volatile swings in relation to news surrounding the loan and related insider trading investigations, but it still closed out the year with impressive gains.

A special committee hired by Kodak found no wrongdoing among the company's executives, and an internal review conducted by the DFC found that it had committed no wrongdoing in awarding the loan. For now, it looks like Kodak may be in the clear, and it plans to move forward with its chemicals push regardless of what happens with the $765 million loan.

However, whether the company's pivot to pharmaceutical chemicals production will be successful is still uncertain. Manufacturing chemical ingredients for generic pharmaceuticals is typically a low-margin business, and reorienting the business will likely prove to be a challenging undertaking.

With the core film segment likely to continue declining over the long term, the potential new growth avenue is a welcome development. However, investors should probably continue with the assumption that Kodak stock will likely continue to see volatile trading in the near term.