After three months of incredible volatility, it's up roughly 89% year to date.

Shares of Eastman Kodak (KODK -1.89%) jumped 47.5% in September, according to data from S&P Global Market Intelligence. The stock soared after an internal investigation into potential insider trading found no evidence suggesting criminal wrongdoing. 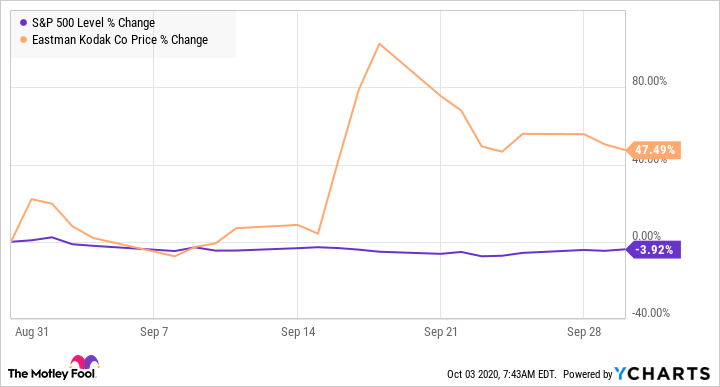 The law firm Akim Gump Strauss Hauer & Feld, which Kodak hired to investigate potential securities trading violations, announced on Sept. 16 that it had found no evidence of insider trading. The favorable investigation findings triggered a big pop for the company's stock, but it's not clear that Kodak is out of the woods yet.

Kodak stock soared 878.8% in July after news that the photography company had secured a $765 million government loan to produce chemicals for potential use in drugs intended to treat COVID-19. Allegations of insider trading and reports that the Securities and Exchange Commission had launched an investigation into how the company had received the loan then prompted substantial sell-offs, with the company's share price falling 72.6% in August. The SEC was also reported to be investigating the timing of the loan's announcement; Kodak CEO Jim Continenza and other executives had received stock options the day before the loan was announced.

September's announcement from Kodak's lawyers spurred a rebound for the stock. While the special committee's investigation did not find evidence of illegal activity, the law firm did indicate that the company erred in granting its CEO stock options immediately leading up to the loan agreement being signed and announced.

Growth potential in chemical production has created new excitement for Kodak stock. The company's camera film and printing business looked poised for continued declines amid pressures created by the growth of digital photography. The company had a chemicals production segment even before securing the loan, but the pivot signals that chemicals could emerge as the business' core focus and gives Kodak new (albeit still speculative) growth avenues.