Please ensure Javascript is enabled for purposes of website accessibility
Log In Help Join The Motley Fool
Free Article Join Over 1 Million Premium Members And Get More In-Depth Stock Guidance and Research
By Adam Levy - Jan 25, 2021 at 11:30AM

It gave up shares worth $2.5 billion in exchange for the streaming service.

Fox (FOXA -2.96%) bought Tubi, a leading ad-supported streaming service, in March 2020 for $440 million. With growing competition for media content, Tubi was struggling to maintain a content library big and broad enough to engage existing viewers and drive new sign-ups. Fox, with its existing media assets, had an opportunity to expand the platform with its own content.

But in order to make the acquisition, it had to sell its 5% stake in Roku (ROKU -1.29%), 6 million shares. At the time, the sale was estimated to generate approximately $350 million to go toward the Tubi acquisition. Today, however, those 6 million Roku shares would be worth more than $2.5 billion, as The Streamable points out. 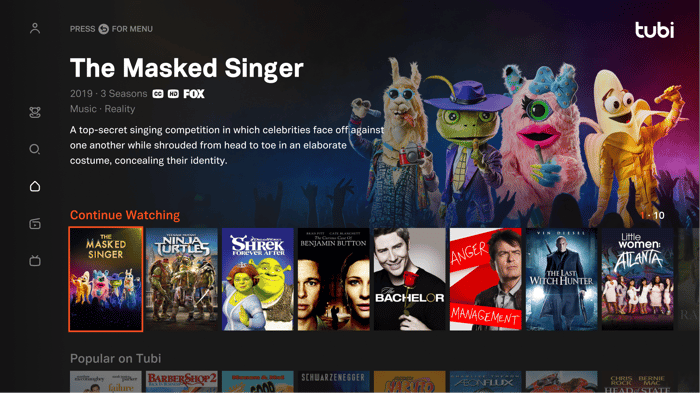 Did Fox bet on the wrong horse?

Anyone who bought Roku shares back in March is quite a bit wealthier than they were 10 months ago. Shares have increased about seven-fold from their lows in the depths of the coronavirus stock crash. Roku has been at the forefront of the shift to streaming that accelerated amid the pandemic, and its shareholders have been rewarded as a result.

But Tubi has had a pretty good run since Fox bought the company. In a recent report released by Fox, it said Tubi streaming hours in 2020 increased 1.9 time from 2019 and viewership grew 58%. By comparison, Roku grew streaming hours 55% and active accounts by 39%.

That said, its ad-supported Roku Channel streaming service is growing about twice as fast as overall viewership, and Roku's taking a larger share of ad inventory in ad-supported channels. As a result, its ad impressions increased 90% year over year in the third quarter. Still, the growth doesn't quite keep up with Tubi's.

What else did Fox give up?

Aside from its stake in Roku, Fox also gave up the opportunity to license the content it provides Tubi to other streaming platforms, including Roku. Fox makes episodes of some of its shows like The Masked Singer and Lego Masters available on Tubi shortly after they air on Fox.

While there's certainly some internal accounting to adjust for costs, Fox practically just has to move money from one pocket to a different pocket. If it licensed those shows to a third party, it would generate cash.

So, the increased viewership for Tubi requires a slight discount versus Roku. Nonetheless, Tubi's growth has far outpaced the larger streaming platform's.

Tubi gives Fox an important weapon in streaming that ensures it doesn't fall too far behind other media companies developing their own premium streaming services. Those larger media companies have valuable pieces to negotiate with Roku and other streaming platforms when it comes to distributing TV everywhere and stand-alone apps for newer streaming services. Some have massive engaged audiences, some have valuable content they're bringing to the streaming platform, and some have a little bit of both.

Tubi, and its audience of 33 million viewers, gives Fox a leg to stand on in its negotiations. The company faced a potential blackout from Roku last year just ahead of its Super Bowl broadcast. It's unlikely Roku would've been able to push back against Fox so hard if it would've had to give up Tubi and the ad inventory that comes with it. And now that Fox has grown Tubi faster than Roku's overall audience, it's an even better negotiating piece.

Meanwhile, Tubi gives Fox broader advertising reach. That can help put its ad sales pitch on par with competing networks that also have sizable ad-supported streaming audiences. Fox says 64% of Tubi streamers can't be reached via its other network properties.

Fox definitely didn't make a mistake in its decision to buy Tubi. It's an important strategic piece for Fox in distributing its content and negotiating favorable terms with streaming platforms and advertisers. The company is executing well, and it's growing quickly. It would've been nice, however, if management had found a different way to fund the acquisition besides selling its stake in Roku.

Why Fox Shares Rose 13% in May