Plug coasts higher on the good news of its peers.

Shares of all the major fuel cell stocks popped Tuesday, and here's the crazy thing: Investors actually seem to be buying these shares for good reasons today and are behaving logically. 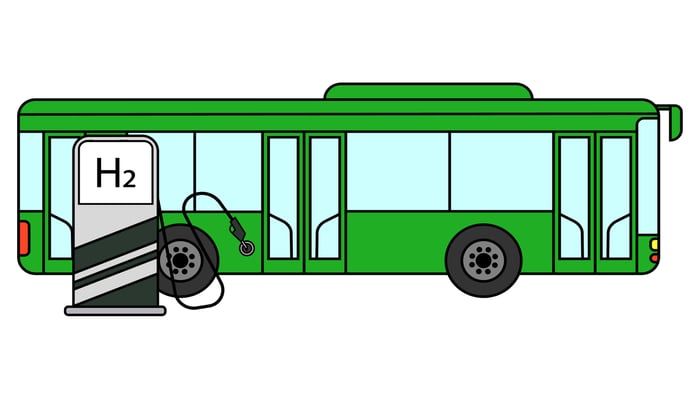 Let's begin with Ballard. This morning, Ballard Power announced that Irish bus manufacturer Wrightbus has placed new orders for 50 more fuel cell modules to power its Fuel Cell Electric Buses (FCEB) that will be used in the U.K. Described as a "follow-on," this purchase follows Wrightbus' purchase of 50 fuel cell modules from Ballard last year, and Wrightbus says its FCEB program is "gaining momentum" and "on an aggressive growth path in Europe and globally," indicating there will probably be more purchases to come.

Granted, Ballard did not state a value for this contract, so it's hard to say how much this contract means to Ballard in terms of revenue. Granted, too, Wrightbus hasn't been Ballard's best customer in the past, paying late for product shipments in 2019 and causing Ballard to report an "impairment loss" that year.

Moreover, more than one-third of the 295 FCEBs planned are already operational, and of the 250 FCEBs for which Ballard will supply the fuel cells, probably more than a third have already been supplied. So, unless other similar programs are announced, the growth prospects from this particular program may be running out. But it's good news on the surface at least, and good reason for Ballard investors to cheer today.

The next bit of good news (one hopes) comes from FuelCell Energy, which announced its earnings date for first-quarter 2021 earnings this morning. FuelCell says its Q1 numbers will come out just one week from today, before market open on March 16.

Management didn't drop any hints about what it will report. Analysts, however, are optimistic. According to Yahoo! Finance's latest tally, Wall Street is forecasting 48% year-over-year sales growth at FuelCell Energy, to $22.1 million in revenue. As production ramps, analysts also forecast a steep decline in FuelCell's losses, from $0.20 per share a year ago to just a $0.04 per share loss in Q1 2021.

Sure, a loss is still a loss. But it looks like progress is being made, and it's on this hope for near-term good news from FuelCell that investors are buying the stock today.

And what about Plug Power? Alone among these three fuel cell companies, Plug Power has nothing significant to report today. Regardless, as the most recognizable name in the fuel cell sector, it's coasting higher and enjoying a halo effect as good news from its peers rubs off.