This is much bigger than you realize.

Volkswagen (VWAGY 2.01%) on Monday shared more parts of its plan to become the world's largest seller of electric vehicles (EVs) by mid-decade -- specifically, the parts that explain where all of the batteries will come from, and where all these new electric VWs will recharge.

While much of what VW announced is focused on Europe, it will have global implications, not only for VW, but also for all other companies that are already in or planning to enter the EV space. That makes the news important for investors holding EV stocks, especially stocks of small companies that are hoping for big growth.

First and foremost, VW is working with partners to improve battery-system performance and cost all the way down to the cell level. It plans to launch a new battery cell (which it calls the "unified cell") in 2023 to be used in up to 80% of the VW Group's EVs by 2030. (The remainder will use a different, premium battery cell in the near term, and likely solid-state batteries later in the decade.)

Over time, as economies of scale and other measures (including recycling efforts) take hold, VW expects to lower its battery costs by up to 50% in entry-level segments and up to 30% in high-volume mid-market segments to "significantly below" 100 euros ($119) per kilowatt hour. That's low enough to make VW's EVs profitable, and lower than many potential competitors are likely to achieve in the near term. 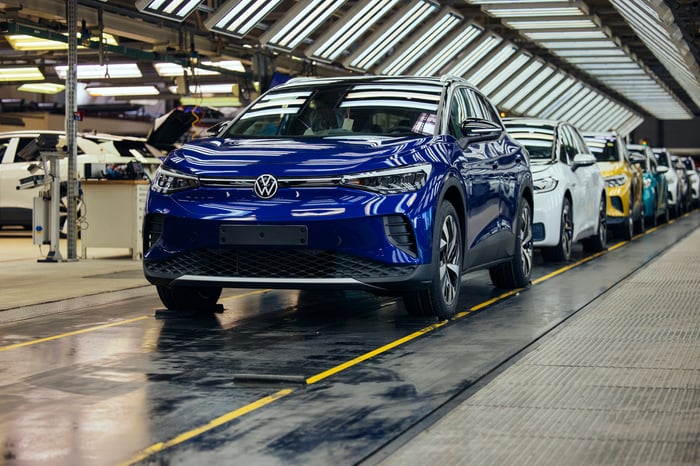 Later, VW expects to introduce the solid-state battery cells currently being developed by QuantumScape (QS 9.19%), a company in which VW has a significant investment. That battery is expected to cut recharging times and costs further, while giving additional range.

VW, together with partners, plans to have six battery "gigafactories" up and running in Europe by 2030. Each of the six factories will have annual production capacity of 40 gigawatt-hours (GWh), for a total of 240 GWh per year.

The first two factories will be in Salzgitter, Germany, and Skelleftea, Sweden. The Swedish factory will be built with partner Northvolt, and will manufacture premium cells for VW Group's upscale vehicles. It is expected to begin operations in 2023. The Salzgitter plant will produce the new unified cells in high volumes for VW's mass-market vehicles, starting in 2025.

VW is investing in recharging, too

VW said that it is also investing in a large-scale expansion of the fast-charging networks in Europe, North America, and China.

In Europe, together with its partners, it expects to operate about 18,000 fast-charging points by 2025, up from about 3,600 today. (VW notes that will be enough to accommodate about one-third of the total expected demand in Europe in 2025.)

About 8,000 of those new points will consist of 150-kilowatt fast chargers installed at service stations owned by BP (BP -0.34%). The remainder will be built by Spanish electric utility Iberdrola; Italian electricity and gas provider Enel Group; and by Ionity, a joint-venture charging network established by VW and several other automakers in 2017. 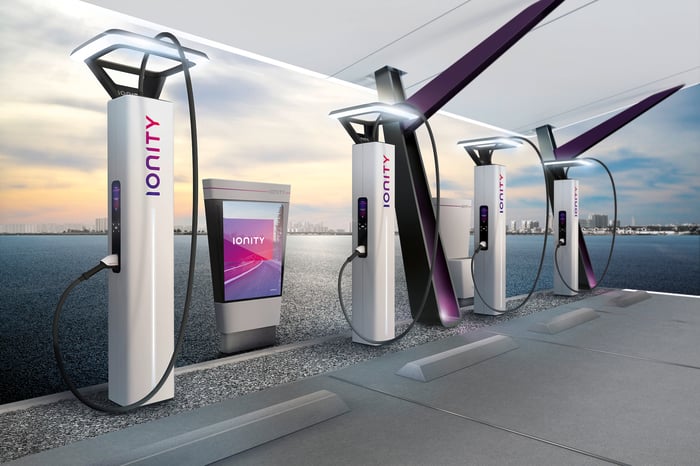 The takeaway: If you expect EV start-ups to "disrupt" automaking, think again

VW's plan to take control of its battery supply chain and to aggressively expand fast-charging networks obviously draws some inspiration from Tesla's (TSLA 7.33%) battery-manufacturing and charging-network strategies. But for once, the key takeaways for EV investors aren't all about Tesla.

VW is making clear, as it has been for a few years now, that it plans to remain one of the world's largest automakers as the world moves to zero-emission vehicles. Specifically, its plans to control its battery supply, and to drive the expansion of charging networks, will limit opportunities for new, smaller entrants into the space -- especially if other big automakers like General Motors (GM 3.07%) and Toyota (TM 0.79%) follow suit, as they almost certainly will.

Put another way, the idea that a small start-up will disrupt the auto industry and seize a major share of the market no longer seems likely (if it ever was). For many of the newer entrants, the choice may be to partner with a big automaker soon -- or get crushed.