German auto giant Volkswagen AG (VWAGY -0.87%) said this past week that in just four years, it will have 16 factories building battery-electric and plug-in hybrid vehicles around the world.

It's a big step toward the company's standing goal to build 3 million electric vehicles a year by 2025. I think many investors have written that off as hyperbole -- but it's time to take VW's electric-vehicle effort very seriously. 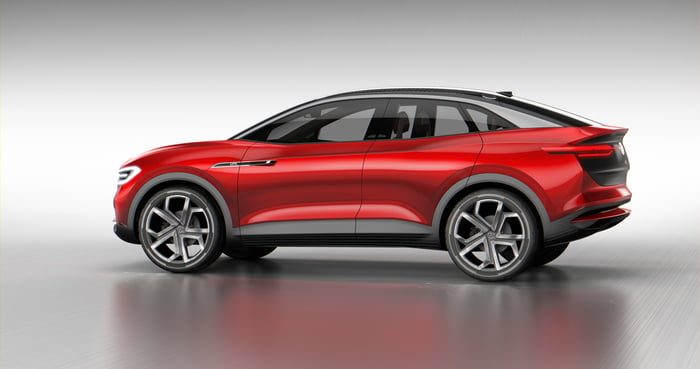 The first VW-brand battery-electric vehicle to arrive in the U.S. will be a crossover SUV based closely on last year's I.D. Crozz show vehicle. Image source: Volkswagen AG.

For investors who have been watching Tesla's (TSLA 0.08%) slow-motion Model 3 production ramp, the sheer scale of VW's production plan may come as a shock. The company is planning to launch some 50 new battery-electric vehicles (BEVs) by 2025, with most production focused on Europe, China, and North America.

Not all of those electric vehicles will be VWs, of course. VW-the-company (or "VW Group", as its executives say), owns 11 automotive brands, including Audi and Porsche -- both of which will launch battery-electric models in the near future.

But the company's hopes for high-volume BEV sales are centered on its namesake VW brand. Four VW-brand electric vehicles are known to be on the way, including a hatchback, a crossover SUV, a big sedan, and a futuristic take on VW's iconic Microbus that seems likely to be very popular in the United States. The first two (the hatchback and the crossover) are expected to go into production by 2020. But where will VW get the batteries?

It's an article of faith in Tesla-fan forums that batteries have given the Silicon Valley automaker an insurmountable advantage over companies like VW, thanks to its Gigafactory, a giant battery factory in Nevada built in partnership with Panasonic.

Without something like a Gigafactory, the argument goes, the legacy automakers won't be able to get enough battery cells to even come close to challenging Tesla's production volume.

But CEO Matthias Mueller said that VW isn't at all interested in building a Gigafactory of its own (emphasis added):

Building up [electric-vehicle] expertise and mastering the technology does not necessarily imply that we want to start large-case manufacturing of batteries ourselves. This is not one of our core competencies, and others can do it better than we can.

It turns out that there are plenty of companies with plans to manufacture lithium-ion battery cells on a large scale. Mueller said that VW has established partnerships with battery-cell manufacturers for Europe and China, and has already awarded contracts to several suppliers that are worth a total of about 20 billion euros.

That 20-billion-euro total is likely to grow before long, Mueller said, as VW is currently negotiating with potential battery suppliers in North America. (But VW may wait until there's clarity around the Trump administration's tariff plans before signing contracts, he said.) 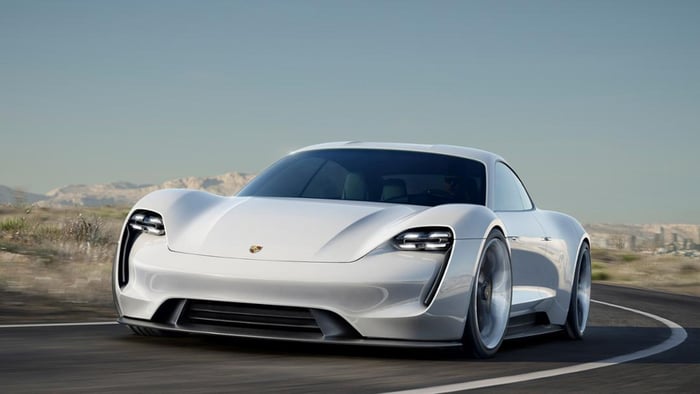 How many batteries are we talking? Mueller said that VW's plans will require 150 gigawatt-hours' worth of batteries per year by 2025. That's equal to the (eventual) planned production capacity for Tesla's Gigafactory, but that kind of volume won't happen for a while.

(Tesla is hoping that the Gigafactory, which is being built out in stages and is only about 30% complete, will be able to produce 35 gigawatt-hours' worth of battery cells in 2018.)

The upshot: Tesla may not be the biggest EV maker for much longer

When it was first announced, VW's ambitious electric-vehicle plan seemed to be an effort to change the subject in the wake of the company's devastating Dieselgate emissions cheating scandal. But here in 2018, it's clear that the plan has acquired enough momentum to be taken very seriously. VW really will spend the huge sums required to develop all of these electric vehicles, procure the batteries, and build them in volume.

And where will that -- and similar plans from most of VW's global peers -- leave Tesla? We'll begin to find out in a couple of years, when these vehicles from VW (and others) begin coming to market in large numbers. But from today's vantage point, it doesn't seem likely that Tesla will be able to keep up with VW and company.