Volkswagen (OTC:VWAGY) unveiled a concept car at the Geneva International Motor Show on Monday previewing an all-electric sedan that the company plans to begin mass-producing in just a few years. It has a big selling point that not even Tesla (NASDAQ:TSLA) can match right now: over 400 miles of claimed range.

But it also incorporates some technology that is unlikely to come to market for a decade or more -- if at all. Here's what VW will -- and probably won't -- bring to market in 2022.

The VW I.D. Vizzion Concept: What it is

The VW I.D. Vizzion is the fourth all-electric VW show car presented under VW's new all-electric "I.D." sub-brand. It's a big, sleek four-door sedan that previews an upcoming VW that will be the top model in the I.D. line when it arrives in 2022. 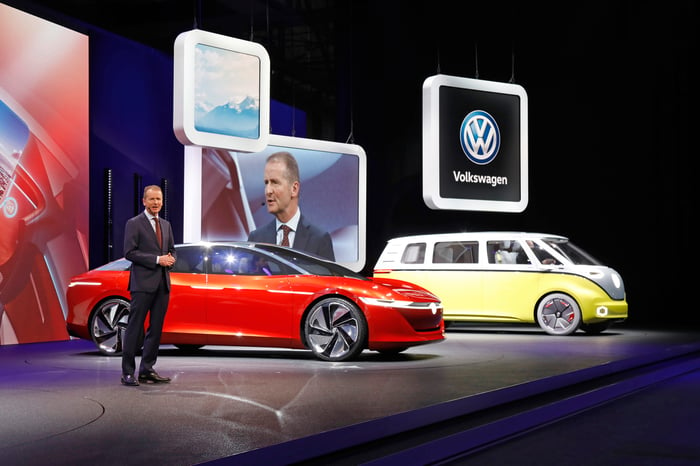 VW has already shown concept-car versions of the first three models planned for the I.D. lineup:

Like the first three I.D. show cars, the I.D. Vizzion combines some futuristic technological details with elements that VW plans to put into production in the near future. For starters, the I.D. Vizzion is based on VW's new MEB "toolkit," a modular vehicle architecture designed specifically for all-electric vehicles.

The I.D. Vizzion is about the size of the midsize VW Passat, but it has much more room inside, thanks to its all-electric drivetrain. As is becoming standard practice in the auto industry, the I.D. Vizzion's battery pack is in its floor, leaving more space for passengers and cargo. 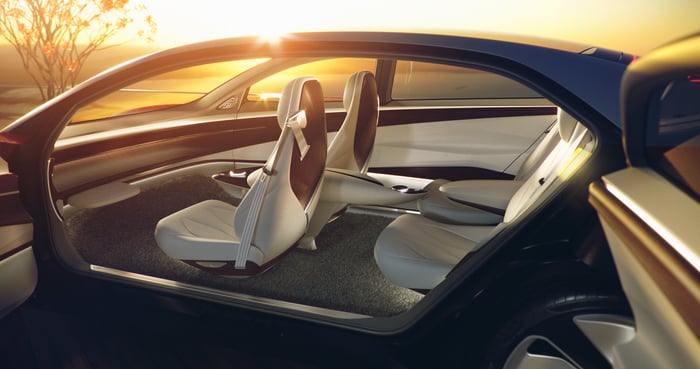 In a flight of fancy, the concept car has no steering wheel or pedals. VW said that the I.D. Vizzion can be self-driving, or a human driver can use augmented-reality eyewear and voice commands to "drive" the car.  VW said that such technology could be available by 2030.

But it also said the I.D. Vizzion's driveline is realistic for 2022: It's a dual-motor design with a claimed range of up to 665 kilometers (about 412 miles). That's more range than any electric vehicle on the market now. Of course, it probably won't have performance to match premium models like Tesla's Model 3, but not all buyers want that: If it offers a comfortable interior and anything close to 400 miles of range at a good price, it should sell.

And needless to say, the production version will come with a steering wheel.

Normally, we'd expect a new production model to go from show car to production-start in two to three years. But VW says that it could take four-plus years to bring the I.D. Vizzion to your local dealership.

It's not that developing an electric vehicle takes longer than developing an internal-combustion-powered model -- at least, it's not the development process itself that adds time. But VW is scaling up to build a lot of electric vehicles: Not only will the four I.D. models be launched around the world, at mass-market prices, but they're just part of the VW Group's overall electric-vehicle strategy.

VW is planning to launch over 30 electric vehicles in total by 2025, across its brand portfolio. Some of those will be small-volume products, but others will be built in mass-market numbers -- and VW expects the total production numbers to be quite large. 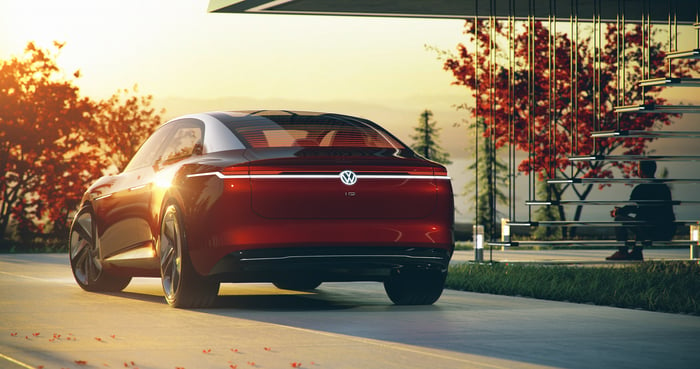 Building out an electric-vehicle supply chain involves everything from procuring enough lithium and cobalt to make all the batteries to transitioning key suppliers to the new power-train technology. VW expects all of that to take time, hence the long wait it's telling us to expect for the production version of the I.D. Vizzion.

What's next in VW's electric-vehicle push?

The first VW I.D. models probably won't arrive until 2020 -- and initially, they won't all be available in all markets. (The U.S. will get the I.D. Crozz first, and may not get the I.D. hatchback at all, VW has said.)

But the VW Group will have a few new all-electric models before the first I.D. model arrives at a dealership. Subsidiaries Audi AG and Porsche plan to release an electric SUV and sports car, respectively, by the end of 2019.