The first all-electric Porsche is due in less than two years. Here's why Tesla investors should hope it's really, really good.

It's no secret that Porsche is going electric. The first all-electric Porsche is undergoing testing now, and it's expected to go into production by 2019.

It's also no secret that Porsche's racing-minded engineers have a particular rival in their sights: They've made it pretty clear that they're hoping to show Tesla (TSLA -0.06%) a thing or two about making sports cars.

Unlike some Tesla fans, I think the electric Porsche is likely to be very competitive with Tesla's high-performance offerings, maybe uncomfortably so. But unlike some Tesla detractors, I don't think that means that Tesla will be in trouble.

In fact, I think an extremely good electric Porsche will be a good thing for the Silicon Valley automaker -- and for its goal of moving the world toward electric vehicles. Here's why. 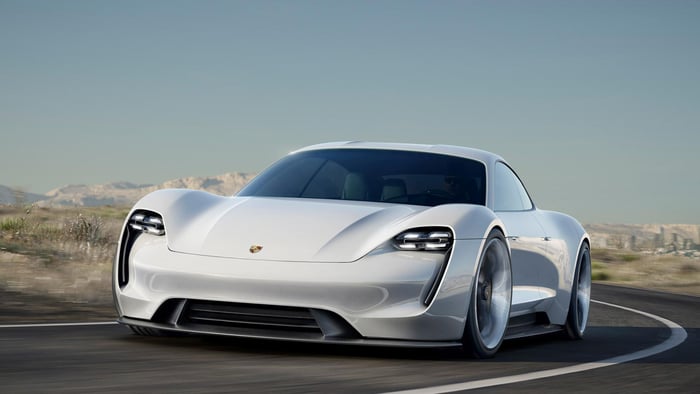 The first all-electric Porsche is expected to look a lot like the Mission E Concept first shown in 2015. Image source: Porsche.

What we know about Porsche's plans

The revered German sports-car maker first showed off a battery-electric concept vehicle it calls "Mission E" back in 2015. It subsequently announced that a production version would appear before the end of the decade. It's now expected in 2019.

Porsche is leveraging the technology developed by corporate parent Volkswagen (VWAGY 0.72%), along with some innovations of its own, to deliver what it promises will be a strong entry. In its concept form, the electric Porsche is a four-door with sports-car styling that features all-wheel drive, all-wheel steering, and over 600 horsepower, with "over 500 kilometers" of range.

It'll be fast, for sure, and it'll recharge quickly as well. Porsche has developed an 800-volt, 350-kilowatt charging system for the car that will be able to recharge it to 80% of its full range in just 15 minutes. (Those chargers aren't vaporware: The first went into operation in Germany last month. A second station is reportedly under construction now at Porsche's U.S. headquarters in Atlanta.) 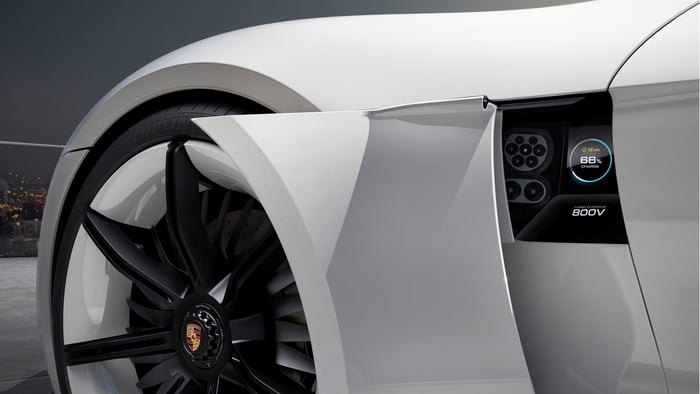 Porsche promises that the production version of the Mission E won't be a one-trick pony: It'll have the staying power to use its performance for more than short bursts without draining the battery, along with the handling and braking abilities needed to run fast on any racetrack. In other words, it'll be a Porsche.

Porsche has also said that its electric sedan will be followed by an all-electric version of its Macan crossover SUV. Is this starting to sound familiar?

Why that's a big challenge for Tesla

Clearly, Porsche is aiming at Tesla's premium models, the Model S sedan and Model X crossover. But so are plenty of other established automakers, including other brands in VW's stable. Why do I think Porsche will be the one that will draw Tesla's focus?

The answer has to do with performance, and how that has played a big role in Tesla's appeal.

At least in optional "Ludicrous Mode," the dual-motor versions of Tesla's Model S and Model X are ferociously quick, running from 0 to 60 miles per hour in times that were once the province of race cars and the fastest motorcycles. The instantaneous torque provided by electric motors is the key to Tesla's ultra-quick acceleration times, meaning that they're fast because they're electric.

Tesla's Model S has shown the world that electric cars can be practical, luxurious -- and blindingly quick. Image source: Tesla.

That's a point that Tesla and its fans have made loudly and frequently. After all, one of CEO Elon Musk's goals has long been to show that electric vehicles aren't just as good as their internal-combustion counterparts, they can be better.

But the laws of physics that make Teslas so quick will apply equally to electric Porsches, assuming that Porsche chooses to take advantage of them. (Spoiler: It will, but maybe not in exactly the same ways Tesla has.)

From an engineering perspective, Porsche may or may not be able to match Tesla's rightly well-regarded software chops. But Tesla has a long way to go as an organization before it can match Porsche's decades of experience building race-winning sports cars.

Remember, these are cars, not phones: Software may be "eating the world," to quote a certain technology investor, but the hardware is still really, really important. And when it comes to race-honed sports-car hardware like suspension parts, aerodynamics, and cooling systems, Porsche has a decades-long head start over Tesla.

Put another way, while it's clear that Tesla has taught Porsche a few things about electric cars, Porsche is out to teach Tesla some big lessons about what makes a sports car. Dual-motor Teslas might be great drag racers, and they handle fairly well on a curvy road, but they're not sports cars. The Porsche will be. Expect it to run rings around Teslas on racetracks longer than a quarter-mile drag strip. 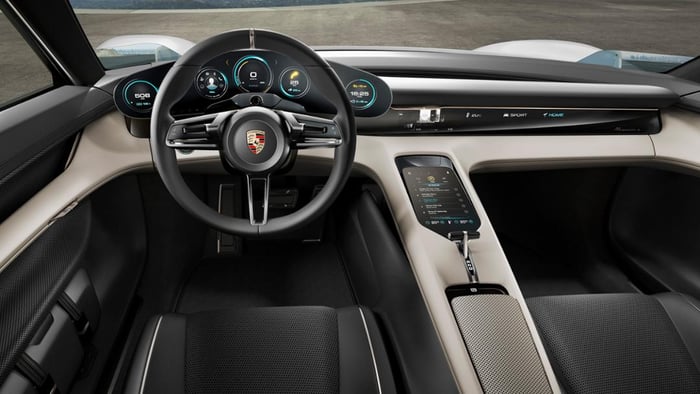 Why will Porsche's success be good for Tesla?

Why will a great electric Porsche be good for Tesla? Because I expect Tesla's engineers to rise to Porsche's challenge, making future Teslas even better. The competition will make for better and better electric vehicles from both companies -- and others in the industry, who will also learn from both. The result could be -- should be -- an expanded market for electric vehicles, with Tesla in the forefront.

One thing to remember is that Porsche's electric-vehicle effort is a big deal, a huge investment that is expected to lead to a historic transition for the company. This won't be a compliance car. Porsche CEO Oliver Blume said recently that the company, which built about 230,000 vehicles in 2016, is scaling to build 60,000 electric vehicles a year initially -- and he hopes that half of Porsche's production will be electric by 2023, just six years from now.

Long story short: This has the makings of a fierce and fun rivalry. If so, it will be good for Tesla, good for Porsche -- and good news for everyone who wants to see electric vehicles become commonplace.