Investors generally took a break after recent gains, but not with these two winners.

After a week of record-setting performance, Wall Street decided to take a break on Monday. Major market benchmarks like the Dow Jones Industrial Average (DJINDICES: ^DJI), S&P 500 (^GSPC 1.05%), and Nasdaq Composite (^IXIC 0.00%) were all down modestly on the day, although they didn't lose too much ground from what for some were record levels last Friday.

The market is nothing more than a collection of stocks, and you should always expect to find at least a few stocks that are rising even on a down day. That was the case on Monday as both Harley-Davidson (HOG 1.04%) and Manchester United (MANU -1.08%) found themselves bucking the market downtrend and moving higher on Monday.

Shares of Harley-Davidson were up almost 10% on Monday. The iconic motorcycle manufacturer  released first-quarter financial results that were more than enough to satisfy investors hoping for more signs of a long-term turnaround. 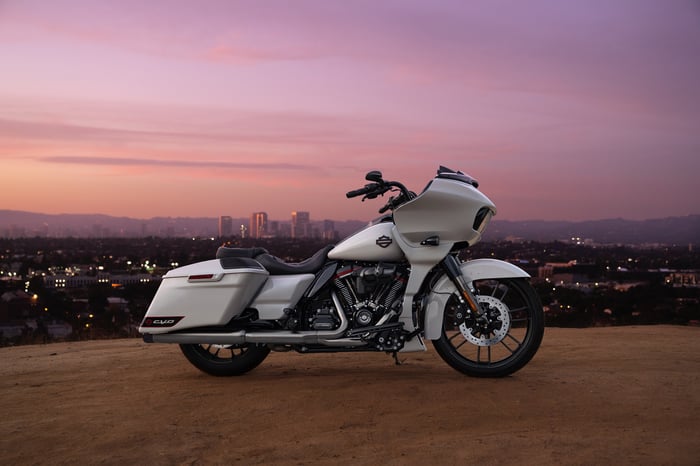 Harley's numbers were quite impressive. Revenue jumped 10% in the first quarter compared to the year-earlier period. Earnings per share nearly quadrupled as demand returned especially in the touring motorcycle segment. Harley's cost-control measures paid off during the period, both through increased gross margin and in significant reductions in key operating expenses like sales incentives and overhead costs. The North American market was especially strong, offsetting weakness in Europe and South America.

Harley sees a strong 2021 ahead. Revenue should climb 30% to 35% in the motorcycle segment, up from its previous guidance for 20% to 25% growth. Despite additional tariffs imposed by the European Union, Harley is hopeful that it will be able to sustain or even boost its operating margin levels.

Investors have already anticipated a full rebound in the business, as the stock is trading at its best levels in nearly three years. Harley is making the right moves, but it needs to keep succeeding in order to justify its latest advance.

In the soccer world, Manchester United saw its stock rise 7%. The English team was among several elite clubs that joined a brand new league that could disrupt the entire sport.

A dozen top teams announced over the weekend that they would form a Super League in an effort to cash in on unprecedented demand for top sports content. Man U is a member of the Premier League, which has already been a top draw worldwide. The Super League aims to challenge the Champions League, which includes winners from various soccer leagues across Europe. Joining Man U from the Premier League are crosstown rival Manchester City, Liverpool, Chelsea, Arsenal, and Tottenham Hotspur.

The established Union of European Football Associations threatened reprisals against Man U and the other Super League teams. Countermeasures could potentially include bans from competitions all the way up to soccer's World Cup.

With funding from JPMorgan Chase (JPM 1.28%), the Super League is an interesting experiment in an era in which the appetite for high-quality programming is unprecedented. Investors can easily see the benefits, but it's unclear whether fans will be on board if it means the end of some long-standing traditions for their favorite teams.