The big rally on Wall Street continued on Friday, sending some major indexes further into record territory. Investors remain happy with the balancing act that Federal Reserve chair Jerome Powell is maintaining and with his reassurances that the central bank isn't going to make premature assumptions about the economy getting back on track. At noon EDT, the Dow Jones Industrial Average (^DJI 1.05%) was up 70 points to 33,754. The S&P 500 (^GSPC 1.05%) had climbed another 9 points to 4,106, a record high, and the Nasdaq Composite (^IXIC 0.00%) had risen 11 points to 13,840.

Helping to lead the way higher were two stocks in very different sectors of the market. Despite their businesses having little in common, fuboTV (FUBO 0.00%) and Harley-Davidson (HOG 1.04%) are both seeing solid gains, and shareholders are celebrating what could be the beginning of even bigger runs higher for the two companies.

Shares of fuboTV jumped higher, having risen 17% midday on Friday. The streaming television company got great news in the form of a high-profile event coming this year and next that will give fuboTV worldwide exposure. 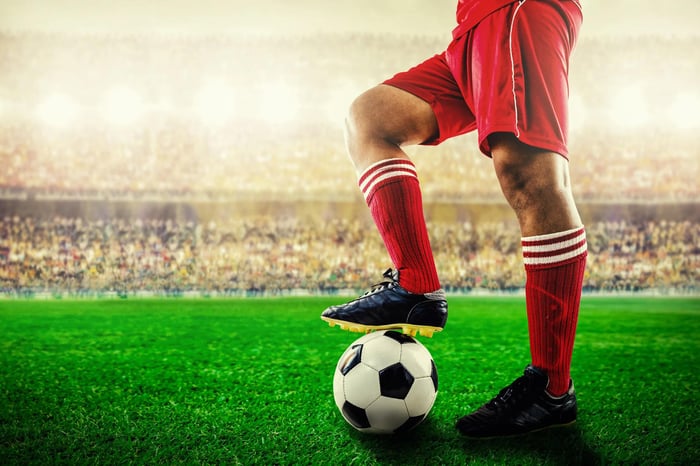 The company announced a deal giving it exclusive streaming rights to qualifying matches among the 10 countries participating in the FIFA international soccer federation's South American confederation, the Confederacion Sudamericana de Futbol or CONMEBOL. The qualifiers are in preparation for the 2022 World Cup in Qatar, with the top four finishers in the CONMEBOL automatically gaining spots in the premier global soccer tournament.

Matches under the deal will start this June and run through early 2022. The move adds to an existing lineup of planned World Cup qualifiers in other confederations around the world.

CEO and co-founder David Gandler explained fuboTV's strategic goal. "By offering the best of South American soccer in advance of Qatar 2022, we are further differentiating fuboTV's sports-first content portfolio." The company looks forward to reaching a larger audience than it's tapped into previously.

Investors have worried that fuboTV fails to stand out in the increasingly crowded and fast-growing streaming TV space. Today's move shows that fuboTV isn't giving up, and exclusive sports content is a great way to gain a competitive edge over its peers.

Harley revs up its engines

Elsewhere, Harley-Davidson's stock gained 4%. The maker of iconic motorcycles got some positive comments from Wall Street analysts about its efforts to rebound from a tough 2020.

Analysts at Northcoast boosted their rating on Harley-Davidson from neutral to buy. Even though Northcoast believes that the motorcycle maker will still see shipping-related pressures in the first quarter of 2021, analysts think that for the full year, Harley-Davidson will be able to top relatively depressed earnings expectations.

It's been a tough year for Harley-Davidson fundamentally, as full-year revenue sank almost 25% and almost completely eliminated its earnings for the year. Nevertheless, investors have been increasingly optimistic about a rebound, and today's move sent the stock back to levels last seen consistently in late 2018.

Harley-Davidson has a huge brand, and it's done what it can to bolster support even as many fear that its biggest audience is aging out of the marketplace. The motorcycle maker will have to tap into a younger set of riders in order to justify the big move higher its stock has already seen.