Please ensure Javascript is enabled for purposes of website accessibility
Log In Help Join The Motley Fool
Free Article Join Over 1 Million Premium Members And Get More In-Depth Stock Guidance and Research
By Rich Smith - Jun 9, 2021 at 9:03AM

The U.S. Navy needs cheap ships. Huntington Ingalls wonders if robots might do the trick.

The U.S. Department of Defense wants to build a 355-ship Navy -- but it also wants to build that Navy at an affordable price. Building more warships as uncrewed, robotic vessels could be a way to achieve both those goals -- and Huntington Ingalls Industries (HII 0.68%) wants to help make that happen.

Stretching 132 feet in length and displacing 145 tons, an MUSV such as Leidos' Sea Hunter vessel is not insubstantial, and LUSVs are even bigger -- as long as 200 to 300 feet, and displacing 2,000 tons. Yet despite their size, these robotic warships seem surprisingly affordable; Sea Hunter, for example, costs only $23 million to design and build, and L3Harris' alternative design costs just $35 million.

At prices like these, building a robotic fleet could be a viable option for a shrinking U.S. Navy -- and a potential growth business that Huntington Ingalls could seek to dominate. 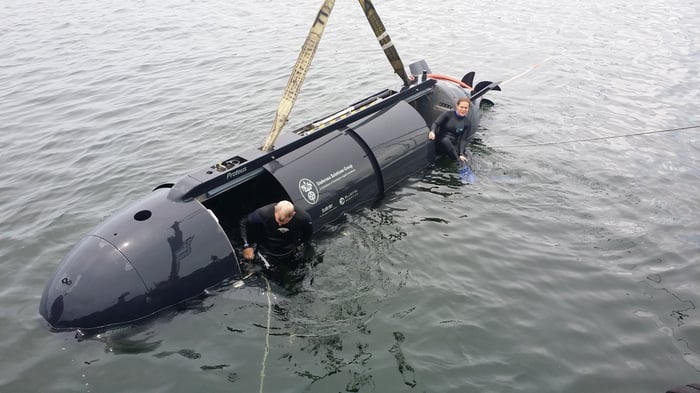 If the Navy is to get anywhere near the number of ships it needs to maintain an effective presence in the waters all around the globe, it needs to build a lot of warships, and fast -- but that's not what's happening. To the contrary, the just-released Biden administration's fiscal year 2021 budget requests only a 0.6% increase in funding for the Navy itself -- and actually cuts funding for new ships; it asks to fund only eight vessels, of which two are tugboats.

In a statement, Rear Admiral John Gumbleton, Deputy Assistant Secretary of the Navy for Budget, admitted that the "eight ships a year [that the administration requested funds for] is not going to get to 355. All things being equal, if you have a 300-ship Navy ... you have to recapitalize at 10 per year [just to hold fleet size steady as older ships are retired], so eight is not going to do it.

So how does the Navy increase its capability as its funding decreases? Huntington Ingalls' robotic warships could be one solution.

Lately, Huntington Ingalls has been altering course toward building more of these vessels. In cooperation with Boeing, Huntington builds the Orca "extra-large" UUV. It also builds the optionally manually operated Proteus large UUV.

In 2020, Huntington expanded its undersea empire, acquiring robotic-submarine builder Hydroid, maker of both the Seaglider small UUV and also the REMUS robotic submarines that the Navy recently ordered. As Huntington said at the time, adding Hydroid's products to its catalog means that Huntington Ingalls can offer the Navy "the full range of UUVs," suitable to missions ranging from mapping the seabed to searching for sunken vessels to conducting minesweeping operations.

Over time, investors can expect Huntington Ingalls to expand its offerings of various-size USVs. As the company explained in its Proteus press release, "Sea Machines' SM300 system can be outfitted to ocean capable vessels to enable scalable autonomy." Huntington Ingalls has taken a minority stake in Sea Machines already, and could even acquire the company at a later date.

At just $9.4 billion in annual revenue (according to data from S&P Global Market Intelligence), Huntington Ingalls is one of the Navy's smaller defense contractors. General Dynamics (GD 1.25%) and Northrop Grumman (NOC -0.12%) -- which actually spun off Huntington in 2011 -- are each four times its size. And yet, Huntington Ingalls is one of the nation's most important military shipbuilders (along with General Dynamics), responsible for building many of the Navy's submarines and all of its aircraft carriers.

With a price-to-earnings ratio of 13 and a price-to-sales ratio of only 0.9, Huntington Ingalls is currently the only defense stock that meets my standards for value -- trading below its 10-year average price-to-sales valuation. The fact that it is now training its sights on one of the most attractive, growth segments of the military shipbuilding industry is just icing on the cake. 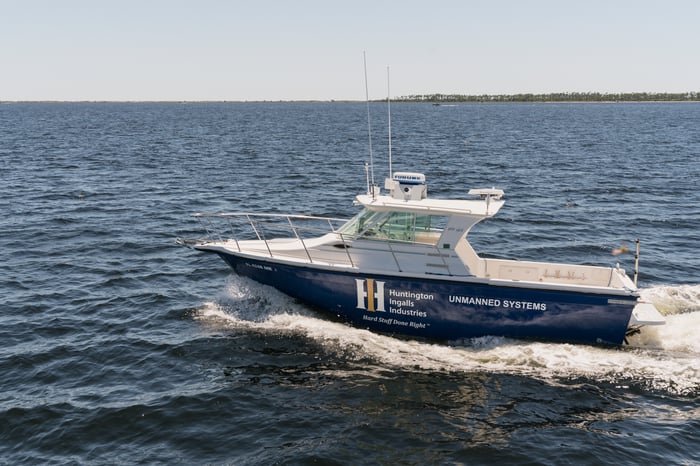