Asked by the Defense Advanced Research Projects Agency -- DARPA, the Pentagon's "mad scientists" division -- to design and build a fully automated robotic warship capable of locating and tracking enemy submarines, Leidos got the thing designed, built, and in the water in just four months. The new warship was dubbed the unmanned surface vehicle (USV) Sea Hunter, and the 132-foot-long trimaran vessel quickly embarked on a years-long series of tests, including an entirely autonomous voyage from San Diego to Hawaii and back last year, and a stint attached to a U.S. aircraft carrier strike group (Surface Development Squadron 1, or SURFDEVRON-1) in January. 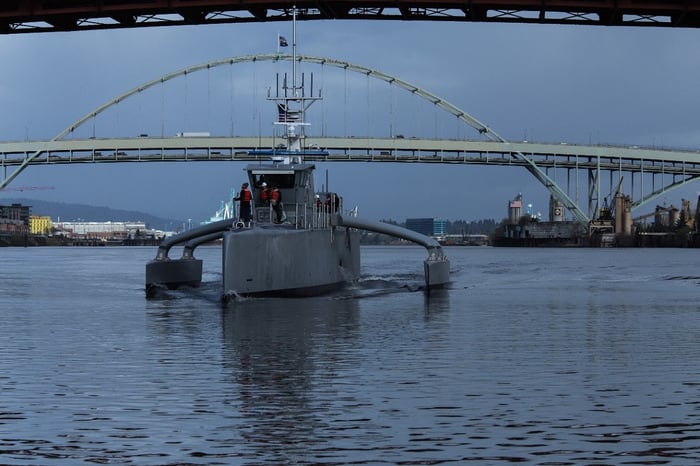 By all accounts, the tests have gone swimmingly -- so well, in fact, that the U.S. Navy has asked Leidos to build it a second Sea Hunter-class warship, and made plans to convert two commercial fast supply vessels into a new class of large USV (in a program most excellently named "Ghost Fleet Overlord").

Now the Navy is moving forward with plans to build even more autonomous warships to help it reach its goal of creating a 355-ship navy. There's just one problem for Leidos: Although it blazed this trail, the Navy doesn't necessarily want Leidos to become its sole-source builder of naval robots.

Leidos never had this market entirely to itself, of course. Rival defense contracting giant Lockheed Martin has been working on remote-controlled warships for minesweeping for more than a decade. Boeing, Huntington Ingalls, and General Dynamics, too, have gotten involved in the race, focusing their efforts on robotic submarines (unmanned underwater vehicles, or "UUVs"). But in this latest contract, the Navy is starting to tread (water) closer to Leidos's turf.

On July 13, as reported in the Pentagon's daily digest of contract awards, the Navy awarded Leidos rival L3Harris (NYSE:LHX) a $35 million contract for the "detail design and fabrication of a prototype Medium Unmanned Surface Vehicle (MUSV)." That was bad enough -- a new rival for Leidos. Surprisingly, though, the Pentagon didn't stop there.

In contrast to Leidos' deal, where one ship was ordered, built, and tested years before the Pentagon committed to buying a second vessel, L3Harris's contract envisions from the outset that the Navy might buy an additional eight MUSVs after the first is built. Assuming these options are exercised, L3Harris stands to earn not just $35 million from this contract, but potentially as much as $281.4 million.

L3 is expected to deliver its first MUSV by December 2022 and, if the other ships are ordered as well, all nine vessels by June 2027.

What it means for the Navy ... and for L3Harris

For the U.S. Navy, this makes sense. Authorizing the construction of multiple MUSVs from the get-go gives it the opportunity to "buy in bulk," and drives the per-ship cost down by more than 10% to an average cost of just $31.2 million per MUSV. But this is a great deal for L3Harris as well.

Assuming the Navy likes L3's product, and exercises its "options" in full, L3Harris could end up leapfrogging Leidos and capturing the lion's share of the market for medium-sized robotic warships, winning contracts to build roughly four times as many ships as Leidos has so far been hired for.

Admittedly, this won't be a game-changer for L3Harris. Even if all eight options are exercised, the resulting $281 million MUSV contract would amount to barely 5% of annual revenue at the company's Integrated Mission Systems (IMS) division, which will presumably build these boats. Moreover, according to data from S&P Global Market Intelligence, IMS is both L3's least profitable division at an operating profit margin of 13.6%, and the company's biggest division by revenue.

That being said, the Navy only has 300 ships in its fleet at the moment, but a goal of getting to 355. That leaves a lot more room for growth, and a lot more room for the Navy to award more shipbuilding contracts in the future. That prospect should give L3Harris shareholders good reason to be optimistic going forward -- and should give Leidos a big incentive to try harder to win whichever contract comes next.