President Trump has famously backed calls to grow the United States Navy "battle force," which currently comprises 293 warships, to 355. Military shipbuilders including General Dynamics (NYSE:GD) and Huntington Ingalls (NYSE:HII) are eager to help him reach that goal, and the Navy has been active in handing out shipbuilding contracts over the past few years.

But now it's starting to look like the Navy is having second thoughts. 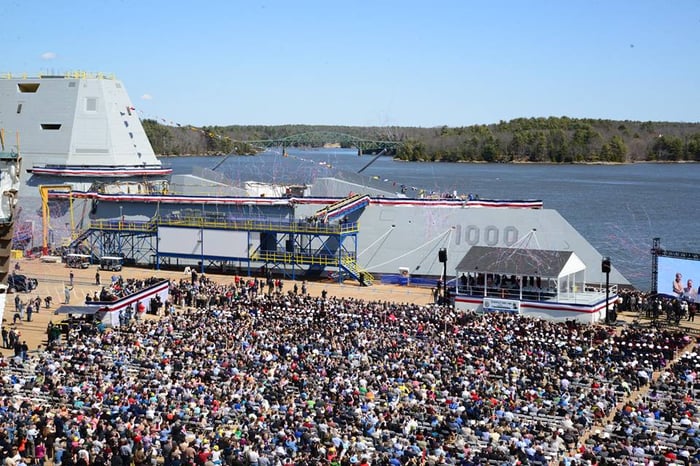 The Navy's new DDG 1000 super-destroyer was a really big deal -- but it came with a too-big price tag. Image source: General Dynamics.

Last month, a White House Office of Management and Budget memorandum cited Navy proposals to decommission four Littoral Combat Ships (the USS Freedom, USS Independence, USS Fort Worth, and USS Coronado) ahead of schedule. All four ships have at least a dozen years of service life left in them -- but the White House is looking to mothball them regardless.

And that's not all. The memorandum in question also calls for decommissioning three "landing ship docks," the amphibious warfare vessels USS Whidbey Island, USS Germantown, and USS Gunston Hall. Each of those vessels has at least eight years of service life left.

And to top it all off, the OMB is recommending decommissioning four Ticonderoga-class guided missile cruisers, slashing planned production of slightly smaller DDG 51-class guided missile destroyers by a total of five ships over the next five years, and slowing down production of Virginia-class fast attack submarines and new FFG(X) frigates as well.

Even with new shipbuilding counteracting some of the proposed decommissionings, the Navy's new plan would appear designed to shrink the battle fleet to 287 ships over a term of a few years -- not grow it to 355.

How does the Navy intend to square this reduction in strength with the president' mandate to grow the fleet? Retired submarine officer and Center for Strategic and Budgetary Assessments analyst Bryan Clark suggests one possible move would be to change the definition of what constitutes a "ship," according to a report by DefenseNews.com.

For example, if "drone" warships such as Leidos' (NYSE:LDOS) crewless Sea Hunter vessel were to be considered ships, it might be possible for the Navy to simultaneously save on payroll expenses by mothballing crewed cruisers, destroyers, and amphibious warfare vessels, and still move toward "355" by replacing them with robotic warships. "Revising ship counting rules to add unmanned vessels ... would let [the Navy] still reach 355" ships by 2030, muses Clark.

But what would that mean for investors?

The attraction of building more unmanned vessels and fewer crewed warships should be obvious to Pentagon bean-counters. If all you want is "ships," well, you can build a whole lot more of them at the $23 million construction cost of a Sea Hunter drone than you can at the cost of a $3.5 billion DDG-1000 (which despite being tagged with the "destroyer" label, is far larger than the DDG-51 class destroyers that make up the bulk to the Navy's surface fleet -- larger, indeed, than the Ticonderoga-class cruisers that the Navy now wants to retire)!

For that matter, even subtracting a single DDG-51 destroyer and reallocating its $1.7 billion price tag to purchase Sea Hunters would permit buying 74 of the drone warships. Presto-change-o, all of a sudden your battle fleet goes from 293 ships to 367 "ships," and ... mission accomplished. You've reached "355", and even gone a bit further.

Granted, these drone ships don't carry guns, missiles, or torpedoes -- much less the helicopters, amphibious landing craft and up to 500 Marines that a soon-to-be-retired landing ship dock would carry. They probably don't provide the military "presence" of an actual crewed and flagged U.S. warship anchored off a hostile shore. But from a sheer numbers perspective, you can't argue that building drone ships instead of crewed ships isn't a great way to get to 355 really, really fast.

And that means there's going to be a strong temptation at the Pentagon to award contracts to build drone ships to key contractor Leidos, and its shipbuilding subcontractor Vigor Industrial in Portland. As some funds are diverted from traditional military shipbuilders General Dynamics and Huntington Ingalls, I would expect Leidos to be a primary beneficiary of the shift.

That being said, I wouldn't be too concerned about this if I were an investor in General D or Huntington, either. It only takes a ship or two from their production quotas, money that will be spent on drone ships instead. When all's said and done, I still think there will be plenty of money to go around, and keep both these military shipbuilders in business for decades to come.