When the U.S. Marine Corps deployed to the Persian Gulf as part of Operation Enduring Freedom, the USS Whidbey Island (LSD 41) helped to carry them there. At 609 feet long and displacing more than 16,000 metric tons, this small-deck "landing ship dock" (LSD) is a warship purpose-built to support Marine amphibious landings, dispatching helicopters and landing craft loaded with marines to assault hostile shores.

The next time America goes to war, though, Whidbey Island may not be around to help out. 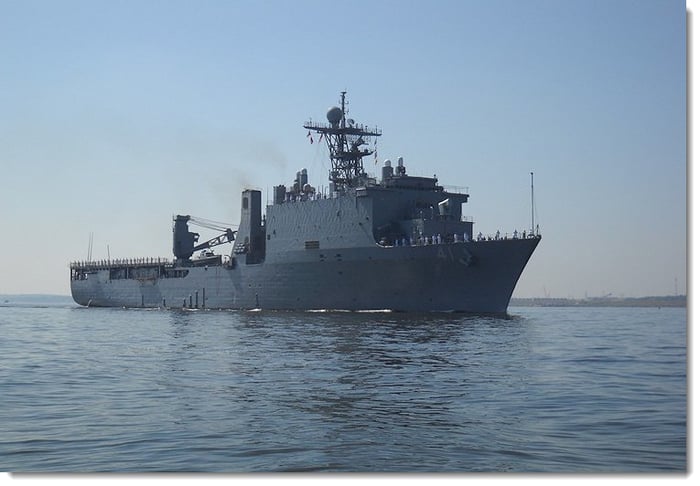 USS Whidbey Island is scheduled to retire in a few years. What will replace it? Image source: U.S. Navy.

The first Whidbey Island-class LSD, you see, entered service during the Reagan Administration. The first Harpers Ferry-class LSD -- a modification of the original Whidbey Island design -- had its keel laid under (the first) President Bush.

Suffice it to say, these ships are all starting to get a bit long in the tooth. With a 40-year expected lifespan, the Navy's Whidbey Island- and Harpers Ferry-class ships will begin retiring in 2025 -- which means that the time to start thinking about replacing them is now. Luckily, the Navy is finally getting this effort under way, and military shipbuilders Huntington Ingalls (NYSE:HII) and General Dynamics (NYSE:GD) are gearing up to help.

To replace its aging LSDs, the Navy is spooling up a program to develop a new kind of amphibious assault ship, tentatively designated LX(R) ("replacement landing ship, of a type to be determined"). In contrast to the LSD, LX(R) will be built more resembling the Navy's newer San Antonio-class "landing platform dock" ships (LPDs). The major difference between the two: While both LSDs and LPDs feature flight decks that can carry helicopters, LPDs also incorporate a hangar in which to store these helicopters; LSDs don't. (Their helos are just tied down on-deck.)

Thus, the switch to LX(R) really represents a phase-out of the LSD concept, and a decision to build more LPD variants -- which could prove a boon to Huntington Ingalls, which builds all of the Navy's LPDs. It also confirms the Navy's desire to keep two different styles of amphibious assault ship in its toolbox: "big-deck" LHA and LHD mini-aircraft carriers, which can carry more helicopters and even F-35B fighter jets, alongside "small-deck" LPDs, which de-emphasize air assets in order to carry more landing craft. When viewed in the context of President Trump's call for a 350-ship Navy, this would encompass a total of 38 amphibious assault ships -- 12 big-deck, and 26 small.

Current plans call for at least 11 and perhaps as many as 13 of these new warships to be LX(R), as detailed in a report from the Congressional Research Service (CRS) released late last year. Procurement should begin in fiscal 2020, but Congress is considering accelerating that to 2019.

Who will build the boats?

CRS notes that both of the shipyards that built its original fleet of LSDs in the '80s and '90s have since exited the military shipbuilding business. To build LX(R), the Navy could award part of LX(R) to any number of military shipbuilders that do remain in business, however -- BAE Systems and Lockheed Martin for example, or General Dynamics or Huntington Ingalls. (The latter two build most Navy ships.) It could even award contracts to a smaller, privately owned shipbuilder.

That said, only Huntington Ingalls currently specializes in building amphibious warfare vessels (at its Ingalls Shipyard in Pascagoula, Mississippi). This gives Huntington Ingalls a compelling advantage in winning the Navy's LX(R) business.

How much could this business be worth? The Navy is targeting a $1.6 billion cost for its first LX(R), reports CRS. Subsequent vessels should cost no more than $1.4 billion apiece (about one-tenth the cost of a Ford-class supercarrier). Thus the entire fleet of LX(R) warships could generate in excess of $18.4 billion in revenue for Huntington Ingalls if it wins the contract. This would equate to more than two full years' worth of revenue at Huntington's current run-rate, and potentially high profits. Huntington's Ingalls unit, which would build the LX(R) if Huntington wins the contract, earns exceptionally high operating profit margins of 13.4% on its revenue, despite being smaller than the company's flagship Newport News division, according to data gathered by S&P Global Market Intelligence.

Will Huntington Ingalls win these revenues and earn these profits? It's impossible to say for certain. The Navy won't issue its official Request for Proposals to build LX(R) before early 2019, and doesn't plan to award a contract before early 2020. But given Huntington's history of success with this warship platform, I'd say Huntington is more likely than others to win -- and the more ships the Navy orders, the more money Huntington will make.