"The queen of the American fleet, and the centerpiece of the most powerful Navy the world has ever seen, the aircraft carrier, is in danger of becoming like the battleships it was originally designed to support: big, expensive, vulnerable – and surprisingly irrelevant..."
-- Capt. Henry J. Hendrix, USN retired

With those words, then-active duty Naval officer Capt. Hendrix fired the opening salvo in a war -- now in its second year -- to convince the U.S. Navy that it's spending too much on aircraft carriers, and that the Navy needs to scale down its carriers, control costs -- or both. Or else, warns Hendrix, "with a budget of around $100 billion... the United States Navy would rapidly shrink from 10 aircraft carriers to eight," violating an act of Congress that currently mandates an 11-carrier Navy.

Today, we're going to focus on the "expensive" part of Capt. Hendrix's argument. Because, as luck would have it, we just got a bit more evidence on this point from the good folks at BloombergBusiness.

How expensive are they?

That's actually a great question, because no two sources ever quite agree on the answer. For example, in a column in this space last week, I mentioned offhand that a Ford-class aircraft carrier costs $14 billion. That seemed a safe figure. Just weeks before, Capt. Hendrix had referred to these warships as costing "$14.3 billion per ship in 2014 dollars."

Nonetheless, defenders of the carrier were quick to argue that if you back out "design and development costs," the price tag on a Ford-class carrier is less shocking. Indeed, in 2014, fellow Fool writer Katie Spence cited GAO figures putting the Ford's cost at "only" $12 billion.

Military math
So right there you have three different numbers, in the space of two paragraphs, referring to one and the same warship. But which number is the right one?

According to Bloomberg, the cost of the USS John F. Kennedy (CVN-79), the second Ford-class carrier to be built, breaks down like so:

That total cost is already $370 million over the Congressional cost cap of $11.498 billion. And it doesn't include the $4.7 billion spent on research and development of the Ford class as a whole. Spread across 10 Ford-class carriers, that would add $470 million to the cost of each ship, taking the total implied cost of the Kennedy up to$12.338 billion.

From an investor's perspective, that may actually be good news -- at least if you own shares of Huntington Ingalls. After all, according to S&P Capital IQ, Huntington is earning a steady 10.8% operating profit margin on its revenues these days. 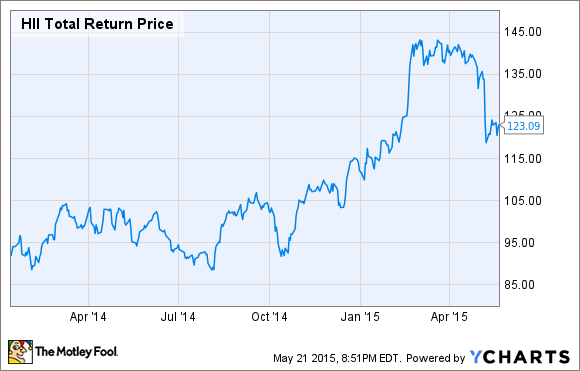 Plus, "$12.338 billion" may actually be a bargain, given that the Ford itself will probably cost taxpayers $12.887 billion ($13.35 billion with R&D costs) by the time it's delivered in March 2016. And the Congressional Research Service is estimating the third Ford-class carrier, the USS Enterprise (CVN 80), will cost $13.472 billion ($13.942 billion including R&D) -- more expensive than either of its predecessors.

Are you confused yet?
I know I am. Trying to keep track of all these prices, all ostensibly referring to one and the same ship-class, makes my head hurt. But when you get right down to it, three things seem clear, and three facts we can state with certainty:

This already very expensive aircraft carrier is only going to grow more expensive over time.

Introducing the USS Gerald R. Ford (CVN 78). It's not finished yet, and we don't yet know what kind of damage it will do to the enemy -- but it's sure doing a lot of damage to the defense budget. Photo: U.S. Navy.