At the end of March, The Journal of the American Medical Association released a detailed summary of the leading causes of death in the U.S. from 2015 to 2020. Heart disease is No. 2 on that list. Type 2 diabetes, which can raise the risk of heart failure, came in at No. 9.

The effort to reduce deaths related to these causes continues within the healthcare industry, thanks to companies like Eli Lilly (NYSE:LLY). Now, Lilly is on the verge of introducing a new contender to join that fight. 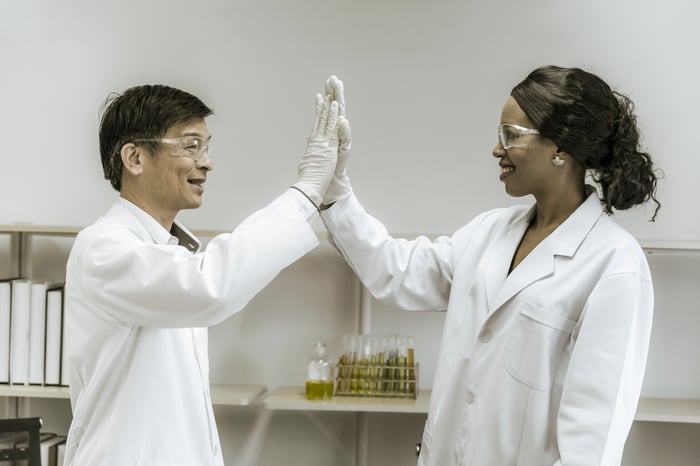 The company is now just steps away from a potentially game-changing approval that could lead to better healthcare and bigger gains, and it has the support of Olympic athletes and high-profile advertising to help spread the word.

In July of 2020, Lilly reported early positive results in clinical testing of its leading diabetes drug, Jardiance, as a potential treatment for heart failure. Those results led to progress with its uniquely named Emperor-Preserved phase 3 trials, made up of nearly 6,000 patients with a specific condition.

As phase 3 trials were carried out for Jardiance, the company continued to promote its other leading drugs, including Trulicity for type 2 diabetes and Emgality, a prescription medication used to prevent migraines and cluster headaches.

As part of its promotional plan, Lilly -- a sponsoring partner of the Olympics -- is working with athletes as brand ambassadors to bring a personal level of attention to the treatments available for various diseases. The company hopes that working with Olympians who have real-life experience with various health challenges might be compelling for viewers. A recent survey by ad tech company Amobee found that the Olympic audience is a good fit demographically because of the high expected viewership by females in the 45-plus age group (44% of the total); this demographic is very likely to respond and act on advertisements promoting health treatments and other pharmaceutical products aimed at children, which tends to benefit pharmaceutical and healthcare companies.

Historically, the Summer Olympics have had a larger TV audience than the Winter Olympics, with four of the top five audience sizes dating back to 2000. And when the games are held in a time zone that encourages U.S. viewers to watch them live, it has resulted in the largest viewerships. This year, NBC expects the Olympics will be seen by 200 million viewers, though that may be a bit optimistic -- dating back to 2002, the Summer Olympics have averaged 33 million viewers while the Winter Olympics have come in a bit lower at 27 million. It will be interesting to see how the viewership numbers look with no fans in the seats and a world still fighting through a pandemic.

Many of the events at this year's games will take place in the morning in Tokyo, giving them prime-time visibility in the U.S. That bodes well for Lilly to optimize its use of ad spend. It's expected that 61% of all U.S. adults will watch at least some of the games, according to a poll conducted by Morning Consult.

With the games now less than two weeks away, Lilly has received highly anticipated good news from its phase 3 trials for Jardiance. The drug has been shown to successfully treat patients with the specific condition (preserved ejection fraction, or HFrEF) being targeted in its most recent tests, resulting in reduced risk of hospitalization or death. Heart failure cardiologist and principal study investigator Stefan Anker has stated that heart failure exhibiting preserved ejection fraction is "the most challenging form of heart failure to treat," calling the trial results a "significant breakthrough in cardiovascular medicine." If the company achieves approval from the U.S. Food and Drug Administration (FDA), it would pave the way for Jardiance to become an immediate competitor in the treatment of heart failure.

Winning FDA approval for using Jardiance as a heart failure treatment in patients exhibiting preserved ejection fraction is the first challenge for Lilly. But an even more difficult hurdle is the competition. Novartis is considered the leader in the heart failure space, and AstraZeneca is neck-and-neck with Lilly, having received FDA approval of its drug Farxiga to treat a similar condition just one month before Lilly's early test results in 2020.

In a highly competitive market, Lilly will need to be ready with its sales strategy if it wants to gain some ground on these strong competitors upon FDA approval.

Perhaps it could be an odd twist of fate for Lilly, but the postponement of the 2020 Olympics due to the COVID-19 pandemic may have been good timing for its sponsorship ad campaign, which will now run hand-in-hand with recent trial results. Bringing awareness to these issues through high-profile athletes on a huge stage while providing evidence of a promising treatment is lightning in a bottle for Lilly, andCantor Fitzgerald analyst Louie Chen has noted that "the potential for Jardiance to treat cardiovascular disease could be a blockbuster opportunity."

Lilly is planning to present the results to the European Society of Cardiology Congress on Aug. 27. If it can turn its current momentum into an eventual FDA approval, investors will be glad they got in on this soaring stock now.