Upstart disappointed some investors with its Q3 earnings, but it still looks like a spectacular long-term opportunity.

It has been a strong year for the stock market, with the broad S&P 500 index rising nearly 25% year to date. But that return is trounced by artificial intelligence-driven loan originator Upstart Holdings (UPST 10.44%), which has delivered its stockholders a whopping 479% gain since Jan. 1.

Upstart's financial performance has gone from strength to strength, but investors were dissatisfied with its third-quarter earnings results last week, sending the stock price down over 20% immediately following the release. The primary concern was not the absence of growth, but that Upstart didn't grow fast enough compared to previous quarters.

But that interpretation of the results might be too simplified. So, here's why the stock should still be a big long-term winner. 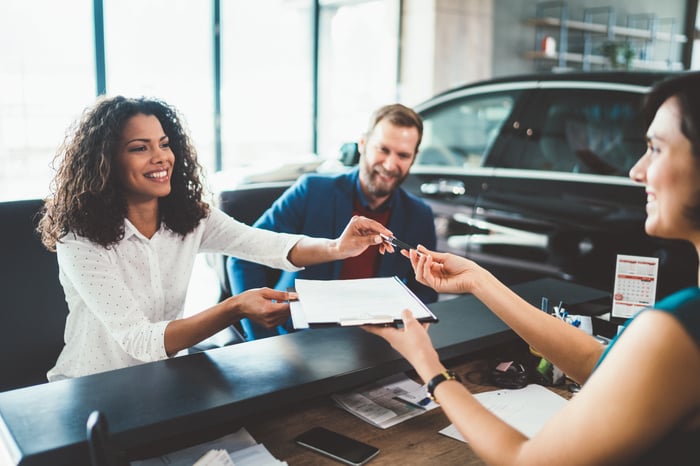 The transition to automotive financing

Upstart makes money by originating loans for banks, which pay the company a fee for doing so. It means Upstart faces no credit risk from the loans it originates and can scale its business by convincing lenders its software does a better job than, for example, the oft-criticized FICO scoring system from Fair Isaac.

It seems to be working so far, with Upstart's artificial intelligence producing 75% fewer loan defaults for the same number of approvals compared to traditional creditworthiness assessment methods.

The company's foray into loan originating began primarily in unsecured finance such as personal, medical, and vacation loans. But earlier this year, Upstart acquired car dealership sales software company Prodigy in a tactical move that set up its entry into its largest market yet: auto loans.

In the second quarter of this year, Prodigy was involved in the sale of over $1 billion worth of vehicles for its dealership clients. For Upstart, there was an obvious synergy to explore: the potential to finance at least a portion of those sales through integrating the two platforms.

In September, this came to fruition with the launch of Upstart Auto Retail, an evolved version of Prodigy that now supports financing within the platform. That means when a dealer uses the software to sell a vehicle, they can simultaneously offer the customer a financing option.

Investors who were disappointed by Upstart's decelerating revenue growth in the third quarter should pay close attention to the growth in its "rooftop" count -- the number of car dealerships signing onto Upstart Auto Retail.

There might be a lag effect, but as Upstart's dealer portfolio grows, they should contribute substantial revenue gains over the long term.

Upstart grew revenue by 250% in the third quarter compared to the same period in 2020. It's an enormous result at face value. However, in the second quarter, it grew the metric by 1,018%, so there's a clear deceleration, which is making investors nervous.

No reasonable person should expect a company to grow at a rate of over 1,000% each and every quarter, but Upstart's stock has rocketed so high in value this year that it was, unfortunately, priced for nothing less. For investors with a long-term time horizon, the recent sell-off might be a big opportunity.

The company initially expected to generate $500 million in revenue during 2021. Then, in May, it revised the estimate to $600 million, and in August, it ratcheted it up yet again to $750 million. All told, based on the first three quarters combined with Upstart's guidance for Q4, it actually looks set to deliver over $800 million.

The company's ability to repeatedly exceed expectations should make investors bullish for the future. Analysts are already getting the jump on 2022, estimating over $1.1 billion in revenue for the new year, but if similar upward revisions occur throughout the year, the actual result might be significantly better.

Focus on the long-term potential

Upstart is already profitable, which is a rare feature for a hypergrowth financial technology company. Its $1.52 in estimated 2021 earnings per share (EPS) would represent 560% growth compared to 2020, but the high-water mark on Wall Street for 2022 would see EPS more than double from there to $3.61.

The stock certainly isn't cheap compared to the 2021 estimate, with a price-to-earnings multiple of 173. By comparison, the broad Nasdaq 100 index trades at a multiple of 35. But investors pay for growth, and Upstart's multiple will shrink significantly next year if it meets the higher end of Wall Street estimates.

And if that trend continues, the stock could even be cheaper than the Nasdaq in a couple of short years, so it likely still has plenty of room to go higher from here.