Please ensure Javascript is enabled for purposes of website accessibility
Log In Help Join The Motley Fool
Free Article Join Over 1 Million Premium Members And Get More In-Depth Stock Guidance and Research
By Anthony Di Pizio - Jul 14, 2021 at 5:01AM

Artificial intelligence has come to the world of car finance, and it's expanding quickly.

Artificial intelligence (AI) is spreading across most major industries, and finance is no different. As lending is often tightly regulated, banks and financial institutions have increasingly used technology to automate processes and reduce the burden. Upstart Holdings (UPST 9.62%) is an all-digital loans originator, helping banks analyze borrowers in non-traditional ways, delivering higher rates of approval for similar levels of risk.

The company recently unveiled an aggressive expansion into the car lending business, which could be interpreted as somewhat opportunistic, given the frenzy in the automotive industry this year. The pandemic caused supply chain disruptions, triggering shortages of new cars and therefore record high prices -- which filtered through to used cars, too. However, some key data suggests this boom might be fizzing out, which could temporarily dent Upstart's ambitions. 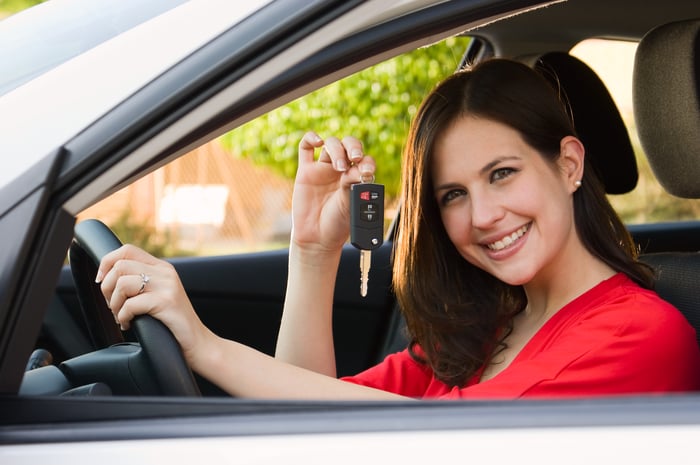 The Consumer Price Index inflation data has been in focus this year, as investors speculated whether aggressive stimulus by the U.S. government and Federal Reserve would cause a broad rise in prices. The Federal Reserve is targeting average inflation of 2% over time, but the April figure came in at 4.2%, causing the great debate to hit fever pitch.

However, there was an unlikely culprit seemingly distorting the data. It turns out that soaring car prices have been responsible for about a third of the recent inflation surge -- with data from used-car auction house Manheim suggesting used cars have risen by 48% over the past year. In fact, used vehicle prices were up 10% and 7.3% in just April and May, respectively.

It so happens that during this period, Upstart was executing plans to rapidly grow its presence in the car financing arena -- a lending market that is second in size only to mortgages in the U.S.

In the first quarter of 2021, the company increased availability of its auto refinancing product from one U.S. state to 33, and expanded its dealership footprint by 45%. It also completed its acquisition of Prodigy, a software provider for car dealers that digitizes and streamlines the sales process. Upstart reports that almost $800 million worth of vehicles were sold through Prodigy in Q1 -- and the next step is integration, so it can offer finance on some of those purchases.

Loan originators like Upstart often aim to partner with car dealerships, where they can acquire customers at the source -- and the dealer also benefits by winning a more likely sale. Upstart's fully digital, AI driven product offers a speedier application and approval process, and Prodigy is a potential access road to growing Upstart's presence.

The prospect of vehicles rising in value at all seems far-fetched, given there's almost never an expectation of making a profit from car ownership. But when inventories at dealerships are down by 80% in some cases, the lack of supply has forced consumers to pay more. It won't last forever, though -- and Manheim's wholesale index of used vehicle value appears to have peaked. After being up 50% year over year, it's now up just 36%.

However, in a positive development for Upstart, the decline appears to be driven by an 18% increase in new car sales in June -- suggesting the pandemic-driven supply chain issues might be starting to ease. As the backlog clears, prices should continue to fall, which may even spur increased demand from consumers who were waiting out the madness.

It's not all good news, though. According to the University of Michigan, just 48% of consumers thought it was a good time to buy a car in May. It's the first time the figure dipped below 50% since the pandemic began. Consumers don't expect things to improve much, either, with 12-month expectations for buying conditions currently at their lowest levels of the last year.

At Tuesday's prices, Upstart shares were about 30% off their highs set back in June, but the stock is still relatively expensive on an earnings basis. With a market capitalization of $9.2 billion and \net income of just $14.6 million over the past 12 months, you would get an earnings multiple over 600. Yet that's not the whole story, because the company is growing rapidly. For example, it delivered $10 million in net income in Q1 2021 alone, setting it up for astronomical full-year earnings growth.

Revenue growth tells a similar story, especially the company's 2021 projections. At the end of 2020, Upstart indicated that it should generate $500 million in revenue for 2021 -- but since completing the acquisition of Prodigy, it's raised the figure to $600 million (it's possible this $100 million increase might be attributable to Prodigy, but Upstart hasn't offered specific guidance on that company's revenue potential).

With $121 million in Q1 revenue, Upstart appears well on track to reach its full-year target. Impressively, if it does get there, that would represent revenue growth of more than 1,000% since 2017 -- so it's understandable that some investors are willing to pay a premium for the stock.

The company generated $1.7 billion worth of lending in the first quarter, so when considering the impact of the car financing expansion, the opportunity for bolt-on growth is clear. Since Prodigy was responsible for processing nearly $800 million in vehicle sales in the same quarter, Upstart capturing even a fraction of those purchases with financing would represent a huge tailwind.

Car financing is the biggest playground for new lending, without venturing into the more complex mortgage space. With U.S. consumers owing over $1.3 trillion on their vehicles, Upstart has quite a growth opportunity ahead of it. Investors should keep an eye on revenue growth, because if the company keeps delivering at this pace, the stock may well be cheap now compared to 2022 and 2023 numbers.