But whatever your strategy may be, it's always a good idea to own a few "no-brainer" stocks. By this, I mean companies that we know deliver strong revenue and profit -- and offer solid growth prospects. You can buy these companies with confidence and hold on for the long term. Let's take a look at three of my favorites to buy with $1,000 right now. 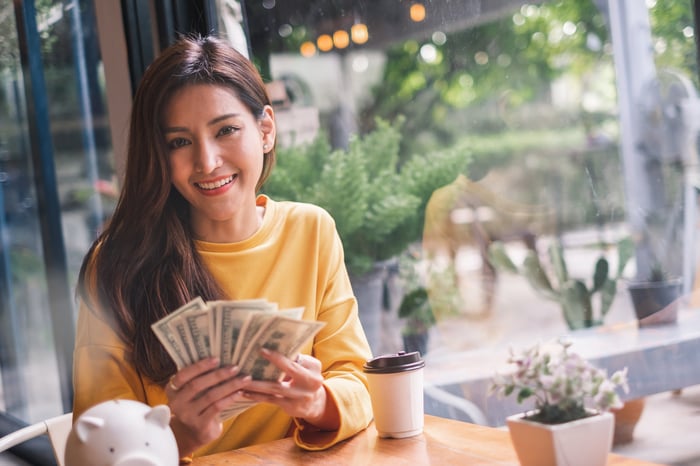 Pfizer (NYSE:PFE) hasn't been a big market winner in the past. For instance, last year the stock was little changed in spite of the launch of Pfizer's coronavirus vaccine. But the tide may be turning. First of all, Pfizer has taken the position as leader in the vaccine market. This year, the company expects vaccine revenue of $36 billion. And Pfizer has major vaccine contracts lined up through 2023.

Beyond the vaccine, Pfizer has seven other blockbuster products. Some will come off patent later on in the decade. But I'm optimistic about Pfizer's ability to compensate for sales lost to generic competitors. That's because Pfizer has 94 candidates in the pipeline. And 29 of them are in phase 3 studies. That gives the company a good chance of bringing new products to market in the coming years.

Another reason today's Pfizer is different from the Pfizer of the past? Last year, Pfizer completed the merger of its Upjohn business with Mylan. This formed a new company, Viatris. This move means the Upjohn business no longer will weigh on Pfizer's earnings. So, we can expect more growth ahead. And finally, why buy Pfizer now? The shares, trading at only 12 times forward earnings, are a bargain.

Starbucks (NASDAQ:SBUX) is another company that's transformed itself in recent times. During the worst of the pandemic, the company decided to accelerate plans for a revamp of its portfolio of stores. The idea is to serve up exactly what customers want. So, Starbucks increased smaller pickup locations in cities and drive-thru locations. The company also put the focus on mobile ordering -- and even ventured into cryptocurrencies. Customers now can load their Starbucks cards using Bitcoin, Ethereum, or others.

These efforts have been bearing fruit. Starbucks' fiscal fourth-quarter revenue climbed 31% to $8.1 billion -- that's a record. The company also said earnings on a generally accepted accounting principles (GAAP) basis rose to $1.49 from 33 cents in the year earlier period. This is for the quarter ended Oct. 3.

And how do we know good days will continue for Starbucks? The loyalty of its customers is a strong clue. The company's active Starbucks rewards members in the U.S. increased 28% in the quarter to nearly 25 million. And in the quarter, this group represented more than half of spending in the company's U.S. stores. More positive signs? The company's return on invested capital (ROIC) and free cash flow have been on the rise this year. 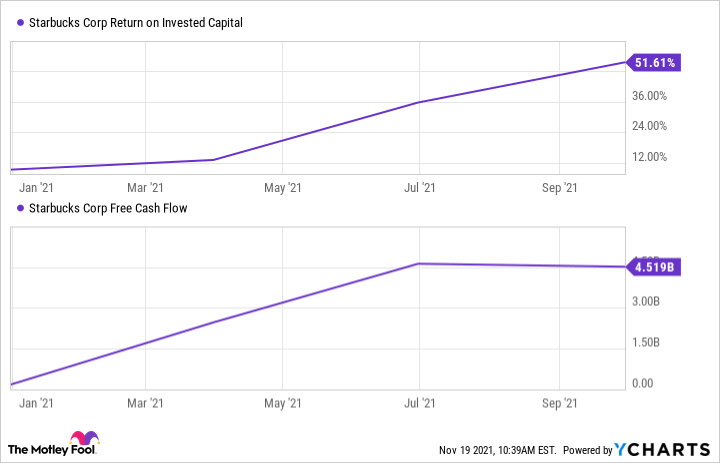 Target (NYSE:TGT) just gave us more proof that its winning performance during the pandemic wasn't temporary. Revenue at the company climbed during the worst of the health crisis as people opted for online shopping and contactless pickup or delivery -- areas where Target shines.

There are many reasons for Target's success -- including its development of strengths in digital and delivery, as mentioned above. But one of my favorites is that Target fulfills 95% of its sales through its stores -- making them a key part of the picture even when customers buy online.

Target's ROIC is another positive sign as we look ahead to the future. ROIC was more than 31% for the trailing twelve months through the end of the third quarter -- that compares to about 19% for the corresponding period a year earlier. Target cites increased profitability as the reason. Target's shares have gained more than 40% this year. But all of the above points indicate there's much more to come in the long term.