Alphabet fell after reporting a decline in earnings, and Pfizer rose on better-than-expected third-quarter results.

Stocks zigzagged between gains and losses Tuesday as investors studied earnings reports and awaited the outcome of the meeting of the Federal Reserve tomorrow. The Dow Jones Industrial Average (^DJI -1.79%) and the S&P 500 (^GSPC -1.89%) closed modestly lower after being in the green for most of the session. Healthcare was the strongest sector and communications services was the weakest. 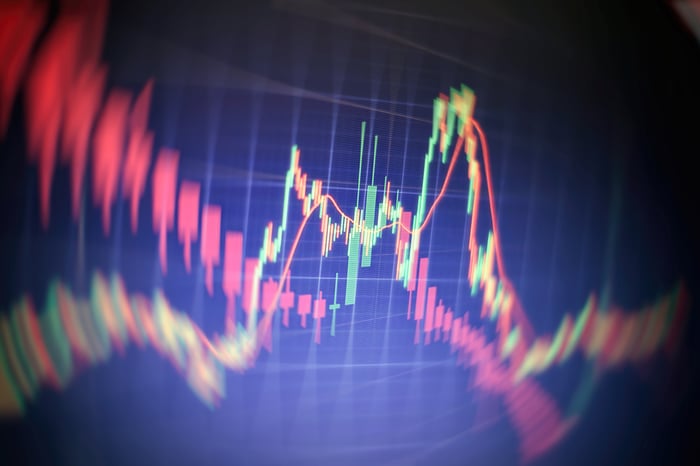 Class C shares of Google parent Alphabet slipped 2.1% the day after the company reported earnings per share that came in below expectations. Revenue increased 20% to $40.5 billion, slightly ahead of the $45.3 billion analyst consensus estimate. Earnings per share fell 23% to $10.12, exceeding the 5% decline that Wall Street was expecting.

Chief Financial Officer Ruth Porat said on the conference call that revenue was driven by strength in mobile search, YouTube, and Google Cloud. Advertising revenue increased 17% to $33.9 billion, and "other" segment revenue -- which includes cloud, Google Play, and hardware -- grew 39% to $6.4 billion.

Analysts on the call probed for specifics on the cloud business that officials declined to provide. But Alphabet said that customer momentum was strong, and that head count growth in its cloud business was a primary driver for increased expenses in research and development and sales and marketing. Cost of revenue grew 31% largely due to rising data center costs and content acquisition for YouTube.

Although the EPS miss was substantial, the share-price decline basically just erased the stock's run-up during the week prior to the earnings release, as investors seemed to take the rising costs related to Alphabet's emerging businesses mostly in stride.

Pfizer reported better-than-expected third-quarter results and raised guidance, and investors boosted the shares 2.5%. Revenue fell 5% to $12.7 billion but was flat considering currency fluctuations and the spinoff of its consumer healthcare business. Adjusted earnings per share declined 2% to $0.75. The results beat analyst expectations for EPS of $0.62 on revenue of $12.3 billion.

Pfizer is preparing to spin off its Upjohn unit to Mylan, and elevating the Q3 results in the eyes of investors was the growth of what will remain with the pharma giant once that deal completes. That unit, Pfizer Biopharmaceutical Group, had 9% operational growth, boosted by a 30% increase in sales of oncology drugs. The Upjohn unit saw a 26% decline in revenue.

Pfizer raised its guidance for full-year adjusted EPS about 6% to a range of $2.94 to $3.00, citing an improved revenue outlook, lower cost of sales, and a more favorable product mix than had been anticipated.