The stock market continued its bull run this year, with all the major indexes on track to end 2019 with double-digit gains. Stocks are setting new highs despite warnings of a looming recession. The S&P 500 set 19 new all-time highs in 2019, and that's after 18 new highs in 2018.

Despite the booming market, a lot of underperformers saw their stocks plummet during the year for reasons in and out of their control. We're not talking 8% year-to-date (YTD) declines. These are high-double-digit-percentage sell-offs that companies may never recover from. 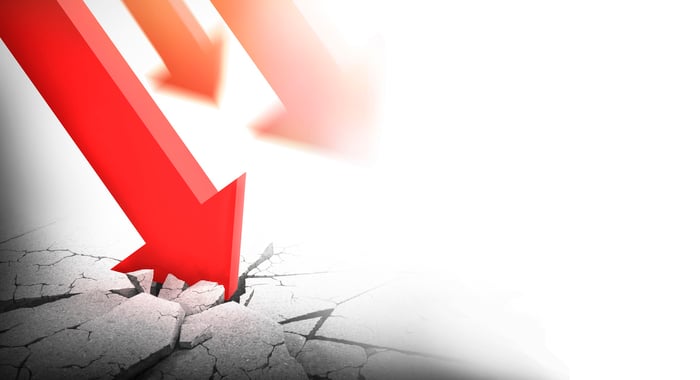 Department store operator Macy's (NYSE:M) has had a tough time of it, even if consumers are opening their wallets this holiday season.

Year to date, the stock is down 45.3% and among the worst performers for 2019. It doesn't help that Goldman Sachs just slapped a sell rating on the shares, cutting its price target to $12 a share from $17 a share. The Wall Street firm is worried additional downside in Macy's business will prevent it from cutting costs.

Macy's has been focusing on its Internet business to take advantage of the demand for online shopping, but its rivals, including Nordstrom, Target, and Walmart, have been doing a better job of it.

With some on Wall Street calling for more store closures, an upgrade of its women's apparel offering, and an overhaul of the supply chain, shares of Macy's don't look like much of a bargain. With the stock suffering for the past few years and little in the way of breakout periods, this iconic retailer may land on a similar list in 2020.

Falling in the "they have themselves to blame" category, PG&E (NYSE:PCG) shares have been plunging for the better part of the year, as its equipment is being blamed for causing 1,500 or more fires in California since June of 2014.

The company has been operating under bankruptcy protection since the end of January when indemnity claims valued at billions of dollars financially decimated the energy company. PG&E's stock did rise a bit when it reached a $13.5 billion settlement this fall with victims of the fires, including the 2018 Camp Fire that caused the deaths of 85 people. That removes a big hurdle to emerging from bankruptcy. PG&E will pay half the settlement in cash and the other in stock in a reorganized post-bankruptcy company.

That it reached the settlement with the fire victims likely means a debt-holder plan that would have erased equity investors' stakes isn't going to be approved. There's still a lot of uncertainty given California governor Gavin Newsom has to sign off on it and is already calling for changes in the reorganization. That uncertainty could weigh on the stock in the months to come.

A byproduct of the merger of IAC's Angie's List and HomeAdvisors, ANGI Homeservices (NASDAQ:ANGI) operates a marketplace for consumers to get access to all sorts of home improvement professionals. While the stock is down 45.7% year-to-date, the company did post a 22% increase in revenue in its third quarter.

Parent IAC has decided not to spin off the company for now, saying when reporting third-quarter earnings that ANGI Homeservices would benefit from staying part of the internet conglomerate.

ANGI Homeservices is spending aggressively to pursue growth and seems to have fixed the ad sales problem that hurt it in the second quarter. It's diversifying its traffic sources and focusing on its fixed-price home services business, which could move ANGI Homeservices out of the penalty box in 2020.

Adamas Pharmaceutical (NASDAQ:ADMS) shares have been feeling the pain largely because of its drug Gocovri, which was approved to treat a side effect caused by Parkinson's drugs. The same drug is in late-stage trials to treat people with multiple sclerosis who have walking impairments.

The company just announced trials for the secondary use didn't show the clinical benefit it was hoping for. Adamas Pharmaceutical is now deciding whether it will continue to invest in the effort, hurting its stock. If that's not bad enough, prescription volumes for the main use subscribers have slowed.

Without clear visibility into how the drug will fare, some on Wall Street are getting increasingly bearish on the stock. Bank of America Merrill Lynch recently cut its price target on the stock to $3 a share.

Blame it on rising drug costs or looming competition from the likes of Amazon, JPMorgan Chase, and Berkshire Hathaway, but regardless, Walgreens Boots (NASDAQ:WBA) has had a tough go of it in 2019. Shares are down 14.3% year to date, prompting rumors it could be a takeover target for a PE firm, with some pointing to KKR & Co. as a suitor.

Walgreens isn't ready to throw in the towel. It's been focusing on boosting its store sales by selling more products and offering more pharmacy services, including delivery. While Walgreens is among the worst Dow Jones Industrial Average component performers, it does pay out a dividend and is investing in its future, which could bode well for investors in the New Year.

It's been a rough year for Pfizer (NYSE:PFE) after a strong showing in 2018 when shares gained close to 19%. This year the stock is among the worst performers in the Dow, off 10% year to date. It's underperforming its pharmaceutical peers even as it's raising its dividend.

Despite its leadership positions, one of the big knocks on the stock has been its lack of growth. It posted sales declines in both the second and third quarters and lodged a 3% earnings decline in the third quarter. Barring some new blockbuster drug, the slowdown in sales should spill over into 2020, hurting Pfizer's stock.

Investors in IT services company DXC Technology (NYSE:DXC) have had a tumultuous year. After declining nearly 50%, shares gained 35% in November alone. Nevertheless, it's among the worst performers in the S&P 500, reeling from disappointing financial results and executive turmoil. The company is in turnaround mode, launching a sweeping reorganization, including unloading noncore assets. That doesn't mean it's smooth sailing ahead. DCX did cut its earnings and revenue target for the full year.

Medical device maker Abiomed (NASDAQ:ABMD) has enjoyed strong growth over the years, with shares skyrocketing since its public debut in 2013.

This year has been a big exception, with shares off 48.6% year to date. The culprit: a series of bad news including two earnings misses, a warning letter from the U.S. Food and Drug Administration that questioned the safety of its Impella RT heart pump, and a recent negative study presented at the American Heart Association's conference. The paper found the Impella heart pump resulted in more death, bleeding, and strokes than when patients used balloon pumps.

Abiomed is a one-trick pony if the Impella heart pump gets hit with more negative news that calls into question its efficacy. Such news could hurt adoption among doctors and health centers, resulting in lower sales and thus an even lower stock price.

TripAdvisor (NASDAQ:TRIP) may operate one of the industry's biggest travel platforms, but that hasn't stopped the bloodletting in the stock. Shares are down 44.8% year to date as it suffers from declining hotel bookings. That's coming off a strong start to 2019. TripAdvisor wasn't able to keep up the momentum in the face of competition from the likes of Alphabet's Google, which has weighed on its business and its stock. For the third quarter, it posted a 7% decline in revenue compared to a year ago and earnings that missed Wall Street expectations. Investors are bracing for a tough fourth quarter as well, given TripAdvisor had gains in the fourth quarter of 2018.

Kraft Heinz (NASDAQ:KHC) is a household name, but it's on the wrong end of a trend in which consumers are moving away from processed foods, hurting the company's sales and its stock.

For its third quarter, it did top analyst earnings forecasts, but sales were down 4.8% year over year. The company is in turnaround mode as it tries to come up with ways to boost sales. As it finds its footing among younger consumers who want fresh food, investors may want to brace themselves for more declines even if the stock seems to be trading at bargain-basement prices.